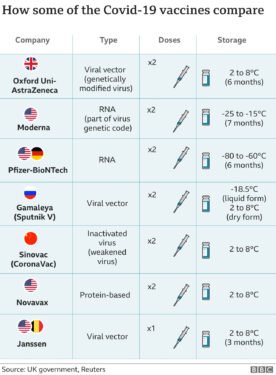 Africa with its population of 1.3 billion people is racing to secure enough vaccines to do a mass immunization with a goal of vaccinating 60% of its population.
However, the new variants may make it difficult for countries to use the AstraZeneca COVID-19, which was the recommendation from the World Health Organization.
But the Africa Centers for Disease Control and Prevention have suggested that countries without the coronavirus variant dominant in South Africa should go ahead and use the AstraZeneca COVID-19 vaccine.
The AstraZeneca-Oxford vaccine has produced confusing results from the start. Earlier preliminary results from trials in different countries showed a wide range of success rates against mild and moderate disease, but researchers have had difficulty interpreting the data because of differences in dose, intervals between doses, and variants in circulation.
Just on Friday, February 5, a study suggested the vaccine offered strong protection against a more transmissible variant, B.1.1.7, which exploded in the United Kingdom and is now spreading fast throughout Europe.
South Africa has put its rollout of the Oxford-AstraZeneca vaccine on hold after a study showed “disappointing” results against its new Covid variant. Scientists say the variant accounts for 90% of new Covid cases in South Africa.
The trial, involving some 2,000 people, found that the vaccine offered “minimal protection” against mild and moderate cases. South Africa’s Health Minister Zweli Mkhize said his government would wait for further advice on how best to proceed with the AstraZeneca vaccine in light of the findings.
Africa’s CDC director John Nkengasong said seven countries on the 54-nation African continent have reported the variant and none besides South Africa is “overwhelmed” by it. No other has expressed concerns about the AstraZeneca vaccine. The seven countries are South Africa, Botswana, Comoros, Ghana, Kenya, Mozambique, and Zambia.
Africa also is expected to receive some 600 million doses via the global COVAX initiative aimed at helping low-income countries. In a separate briefing Thursday, February 4, Richard Michigan with the World Health Organization told reporters there is a “very, very good prospect this objective to supply up to 600 million doses by the end of 2021 will definitely be reached.”
China has sent 100,000 COVID-19 vaccine doses to Equatorial Guinea, the Central African country’s government said on Thursday, the latest in a series of donations to countries on the continent struggling to procure shots. The country’s Vice President Teodoro Obiang Nguema Mangue, the son of President Teodoro Obiang, will be vaccinated first to reassure the population.
The doses developed by China’s Sinopharm arrived on Wednesday in the capital Malabo, the government said in a statement. They will be enough to vaccinate 50,000 people or 4% of Equatorial Guinea’s population.
China is aiming to cultivate goodwill through vaccine diplomacy with lower-income countries. It said this month it was providing vaccine aid to 13 countries globally and planned to help a further 38. In the first week of February, it said planned to donate 200,000 vaccine doses to Guinea and 100,000 to Congo Republic.