A call to the Jamaican Diaspora 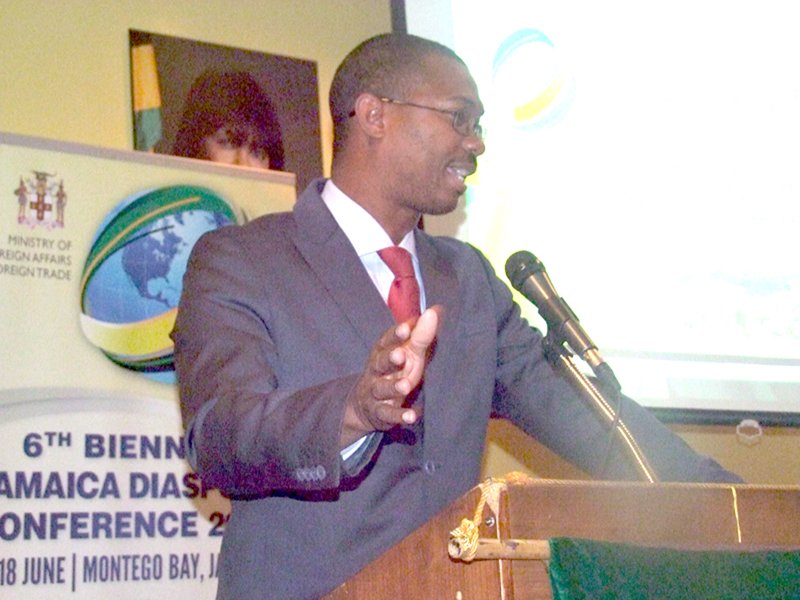 On the evening of Thursday, April 16, Jamaicans and friends of Jamaica in Montreal gathered at a town hall meeting to hear Arnaldo Brown, Jamaica’s minister of State, Foreign Affairs and Trade deliver a stimulating appeal for increased involvement in the country’s development drive by those in the Diaspora.
He highlighted an impressive and wide-ranging list of foreign involvement and investments that are putting Jamaica on a fast track towards its 20/30 Vision of attaining first world status, including infrastructure development in and around Kingston as well as in other areas of the country. And also pointed to significant initiatives being undertaken by the Chinese and other governments, and by foreign corporations as signs of confidence in the investment climate in the country.
But Brown says he is just as excited about the potential for Jamaicans in the diaspora to benefit from this new environment for growth at home.
“I want Jamaicans to own a piece of the action,” he told the crowd gathered at the Jamaica Association on Jean Talon Street. “Jamaicans must build Jamaica.”
And he made a point of highlighting the important bonds that continue to tie those in the diaspora to the land of their birth, saying that close to 30% of the country’s GDP comes from money and resources transferred by Jamaicans living abroad.
More evidence of that commitment was revealed by George Grant, honorary consul of Jamaica at Montreal, who told the meeting of a $1 million endowment bequeathed by a Montrealer to go towards helping marginalized students in Jamaica.
Brown placed an exclamation mark on the on-going relationship saying:  “the fact that Jamaicans have migrated does not signal that they are less committed or less Jamaican.” And he added that the diaspora is “Jamaica’s most important asset.”
As a way of consolidating that relationship, Brown says his government continues to place strong emphasis on the biennial Jamaica Diaspora Conference, which is an opportunity to acknowledge “the contributions made by Jamaicans resident abroad to national development, and to use the occasion to involve the diaspora more comprehensively in the economic, social, political and social life of Jamaica.”
The conference, launched in June 2004, has been held every two years and will take place in June this year.
The charismatic Brown, a former attorney who was appointed to his portfolio in 2012, has as one of his stated missions a commitment to  “deepen the engagement between Jamaicans at home and abroad in the country’s journey toward development.”
He told nationals he expects to see each of them at the conference in Jamaica. The Sixth Biennial Jamaican Diaspora Conference, June 13-18 2015, at the Montego Bay Convention Centre. For information, call George Grant, Honorary Consul of Jamaica at Montreal at 438-931-8984.