Advertise with Us
Home News Community News We want to belong

We want to belong 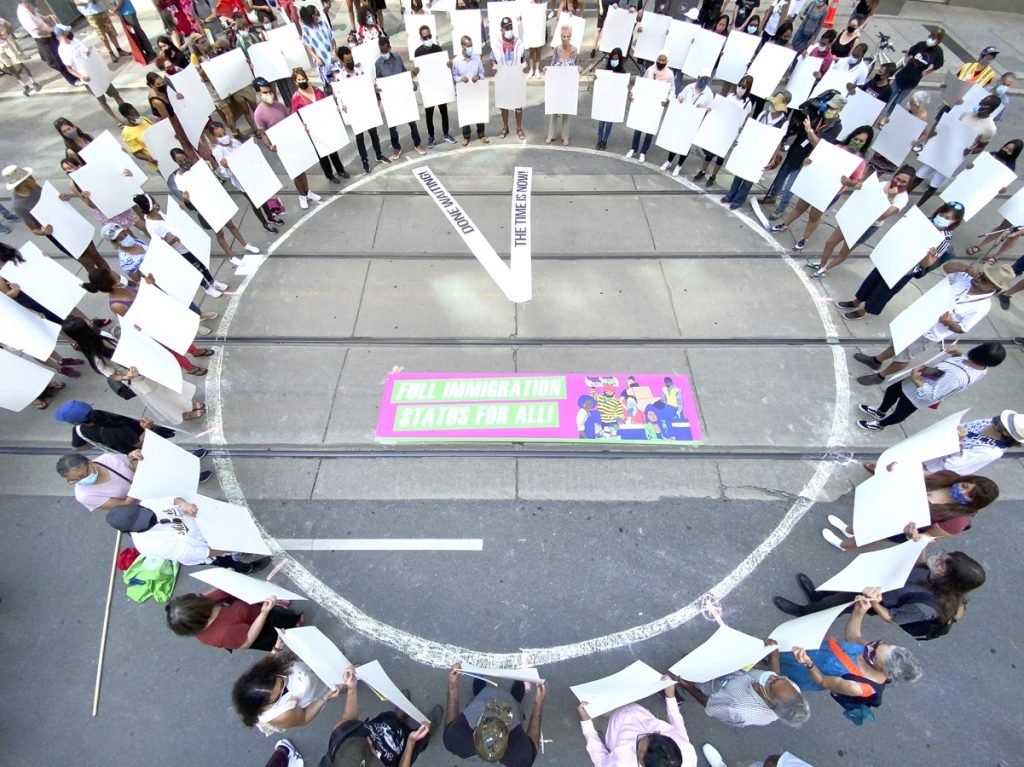 RALLIES ACROSS CANADA DEMANDING FOR REGULARIZATION OF STATUS

The Migrant Rights Network is once again calling on the Canadian government to give full and permanent immigration status to all.
The network, which is an umbrella organization of groups representing refugees, migrants and their supporters, is demanding that action be taken fast bearing in mind the situation with the raging COVID-19.
They are saying if their demands for access to healthcare are not met, the consequences can be fatal for a significant number of people in Canada who are undocumented.
Across Canada factions of this group have been taking to the streets appealing to the government to regularize their status.
In Toronto on Sunday August 23, Migrants, refugees, undocumented people, workers and students installed a human clock outside Immigration Offices on 74 Victoria Street to call for urgent action for full and permanent immigration status for all.
This is in response to the prorogation of parliament, calling for a regularization plan in the upcoming throne speech.
One such rally also took place in Montreal outside Prime Minister, Justin Trudeau’s office near Henri Bourassa the cry was the same. They want to have permanent status in Canada in order to lead full lives.
The Migrant Rights Network says Canada needs a single-tier society where everyone in the country has the same rights and opportunities, and that means full and permanent immigration status for all.
As stated on their website: “Canadian immigration policy divides us into two categories: those that arrive with permanent immigration status, and those that don’t. Those who don’t are largely racialized and low-waged. We are workers, students, refugees and families. The immigration system is built to keep most of us temporary, even though our homes, families, communities, and livelihoods are here. This forces, hundreds of thousands to become undocumented. Without full immigration status, we are denied healthcare, decent work, and support in times of crisis. We are separated from our families. Full Immigration Status for All is a call for equal rights for all of us..”
This extends to international students who have found themselves here amidst the pandemic, while their Canadian counterparts have access to CERB and CESB to help them weather the pandemic and return to university in the fall, international students are not eligible for this support. The insurance offered by the university is limited and students are holding onto hope that they too can have the same opportunities.
Demands for equal status — known as “regularization” — have come to a head in recent months as COVID-19 spread throughout several farms in Ontario, highlighting the dangers the pandemic posed to migrant workers.
Earlier in July the CONTACT spoke to Samba a refugee who has all his hopes on having a normal life in Canada. Should his status be denied, he has nowhere to go and will be forced to remain in Canada illegally.
“They burned my house after the election in my country, I went to America, but I had to come here to Canada because they said it would better.”
Just how much better is a question only time can answer.