Advertise with Us
Home News The Killings continue… 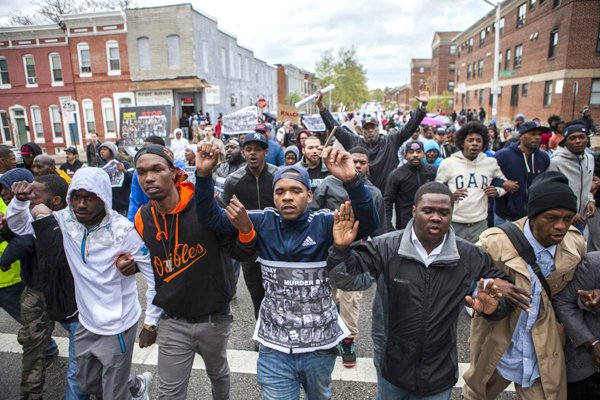 For a while after the killing of Freddy Gray on April 19, it seemed OK to muse that President Barack Obama might consider calling off the White House Correspondence Dinner on Saturday 25, in solidarity with the families of the Black men murdered by p

olice.
Sure, it’s illogical to expect such a powerful and controversial move by the president of all America, but think about the optics: him telling all those quasi important people to stay home as he contemplates ways to ease on-going tension and increased distrust between African-Americans and police departments in major cities across the U.S.
Rightly so, he probably never considered such a dramatic stand on behalf of America’s most vulnerable demographic, young Black men, and instead chose to go and crack jokes with Washington insiders and the ‘beautiful people of America.’
As he did so, the reality of what happened to the 25-year-old native of Baltimore, Maryland, started to sink in with other Blacks in the city and surrounding areas, and it made their blood boil.
You see poor Freddy had crossed paths with the police a few days before, and maybe in keeping with his past dealings with them he panicked and ran.
The police caught him. No one knows what happened, but Freddy ended up dead. Apparently his spinal cord ripped apart.
The officers involved, in no hurry to produce a report on what went down, surmised that he may have fallen down and hurt himself at the back of the vehicle in which he was being transported. And sounded as if they regretted not securing his seat belt. His spinal cord was ripped in two.
Freddy’s funeral was Monday. Tens of thousands of right-thinking people hit the streets that night in a peaceful protest. But, also on the streets were what may have been dozens of mostly younger ones, who were angry enough to want to cause a ruckus… they burned and looted.
Of course, their actions caught the attention of all the important people, including the president, who joined others and labeled the so-called rioters “thugs…”
It wasn’t long before that incident, on Thursday, April 2, Eric Harris in Tulsa County, Oklahoma, caught in a ‘sting’ trying to sell a gun to undercover police tried to run. He was quickly cornered. And as he was being subdued by a group of officers when one of them, 72-year-old Robert Bates overcome by the excitement of it all decided to deal Mr. Harris a few bolts from his Taser, instead he pumped a bullet or two in him.  “Sorry,” he said.
Still more…. on April 4, in North Charleston, South Carolina, Walter Scott, a 50-year- old ex-military man, also ran into the cops, who stopped him on a routine traffic incident.
He too tried to run, but didn’t get far because Officer Michael Slager had his gun a-ready and routinely pumped between five and eight bullets into Mr. Scott’s back and backside. Curiously, after killing the unfortunate Black guy he tried to frame and handcuff him.
Just three of the recent high profile incidents that frame the relationship between Blacks and police. No wonder their blood is boiling. And maybe it’s unfair to categorize those young people as thugs…