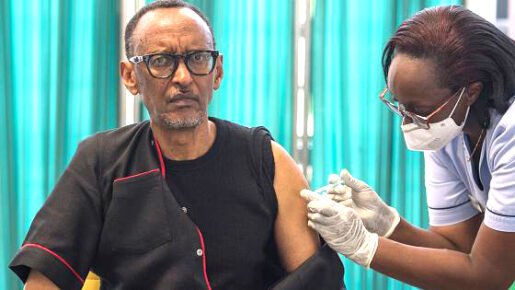 Rwandan President Paul Kagame has been vaccinated against Covid-19, making him the first head of state to receive the vaccine in East Africa, where immunisation campaigns are picking up speed.
Photos of the 63-year-old head of state and his wife Jeannette receiving the vaccine in a hospital in the capital Kigali were posted on the official Twitter account of the Rwandan presidency. A total of 230,000 Rwandans have already been vaccinated, the presidency said. The name of the vaccine administered to the presidential couple was not specified.
But the country has received 100,000 doses of Pfizer-BioNTech vaccine and 240,000 doses of AstraZeneca vaccine. In February, Rwanda became the first East African country to vaccinate against the disease, with the Moderna vaccine, administered to those most at risk, such as health sector workers.
The country has carried out more than a million tests and detected nearly 20,000 cases, including 271 deaths, since the start of the pandemic.
So far in East Africa, Rwanda, Kenya and Uganda have started vaccination campaigns. Ethiopia, the worst-affected country in the region, will start on Saturday
Senegal ablaze with Protests.
Senegal has recently witnessed the most widespread expression of anger at the president, Macky Sall, and outrage after the arrest of the country’s leading opposition figure, who has been accused of rape.
The arrest of leading opposition politician Ousmane Sonko on March 3, was the trigger for Senegalese young people, many of whom support Mr. Sonko, to take to the streets. Mr. Sonko, who came in third in the 2019 presidential elections, has been accused of raping a young woman who worked in a massage parlor.
Rather than listen to the demands of the largely peaceful protest movement, the government has set out to crush it using all the means at its disposal: arbitrary arrests, the use of live ammunition, and the deployment of marauding militias.
In February, Sonko, president of the opposition PASTEF party (Patriots of Senegal for Work, Ethics, and Fraternity), was accused of rape and making death threats by an employee of a beauty parlour and has been subsequently stripped of his parliamentary immunity by an ad hoc commission dominated by pro-government MPs.
Hopes of a just resolution to the allegations were dashed when, en route to court, Sonko was arbitrarily arrested and placed in police custody for “disturbing public order”.
That was the last straw. Public anger erupted, setting the country ablaze.
The grievances that triggered countrywide demonstrations – from the capital Dakar to the Casamance region in the far south – go far beyond Sonko’s case. In the streets and on social media, cries of “Free Senegal” and “Macky out” have all but drowned out those of “Free Sonko”.

Tanzania’s Leader’s Absence Fuels Health Concerns
Tanzania’s main opposition leader has demanded information on the health of President John Magufuli, a prominent COVID-19 sceptic whose absence from public view has brought speculation he is receiving medical treatment abroad.
The 61-year-old Magufuli insisted for months that COVID-19 had been fended off by prayer, refusing measures such as masks and lockdowns, but last month conceded it was still circulating after the vice president of semi-autonomous Zanzibar was revealed to have died of the virus 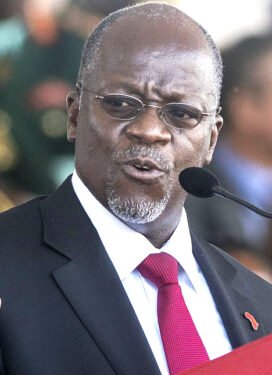 Meanwhile, Kenya’s Daily Nation newspaper reported that “an African leader” from a country that has refused face masks and public health measures, had been admitted to the Nairobi Hospital.
Magufuli was last seen in public on February 27 at the swearing-in ceremony for the country’s secretary of state in the State House government offices in Dar-es-Salaam, the East African country’s largest city.
Tanzania’s government has yet to comment on Magufuli’s whereabouts, however, Information Minister Innocent Bashungwa on Wednesday warned media and citizens against “using rumours as source of information”.
Magufuli has played down the threat of COVID-19 in Tanzania and scoffed at global panic. He urged Tanzanians to put faith in prayer and homespun remedies such as steam inhalation rather than vaccines, which he said were dangerous and part of a Western conspiracy.
“Vaccines are not good. If they were, then the white man would have brought vaccines for HIV/AIDS,” he said earlier this year. Last year he dismissed coronavirus testing kits, which he said had returned positive results on a goat and pawpaw fruit.
Tanzania stopped reporting coronavirus data in May last year when it said it had 509 cases and 21 deaths, according to data held at the World Health Organization, which has called on the country to share its information.