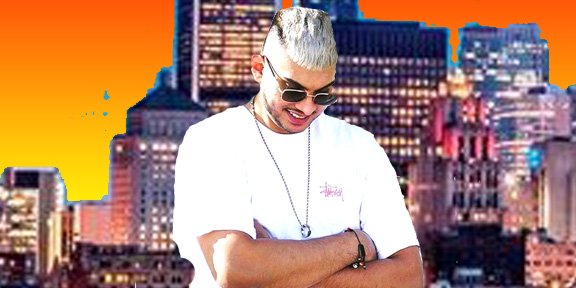 Richard Parsram is a child of our community, who so many of us saw grow up at his family restaurant, Caribbean Paradise, in LaSalle.
What we weren’t aware of is the creative fire that has been raging in his gut from his teenage years and now fueling his desire to make his name on today’s cultural landscape with his music, his film projects, and through merchandizing.
Although the young Richard of yesterday is still the shy big-little kid at the restaurant, these days his relentless energy is driving him to build his empire on the foundation of his talents as an artist and his creativity.
You’ll come to know him by his stage name MAjOR and like many in the local Hip Hop/Rap community have already come to realize, his passion for the music could make him an unstoppable force.
“I was probably 14-years-old when I fell in love with hip-hop,” he told The CONTACT. “I remember receiving my first microphone from my parents and couldn’t put it down.”
At the time it didn’t matter to the young LaSalle teenager of Guyanese heritage that he didn’t have too many role models in the art form.
He was consumed by an inexplicable love for Hip-Hop/Rap. And he did all that was necessary to put himself on the path to success: reading, researching, sampling and enjoying the music of the veterans, pioneers and up-and-comers.
He eventually found his role model and “idol” in a Louisville, Kentucky artist/songwriter who died in 2008, called Static/Major.
“Static/Major worked with artists and groups like Aaliyah, Pretty Ricky, Kanye West, Dr. Dre. Lil Wayne and was even sampled a few times by Drake, I read all I could find about him and had great respect for his gifts and his talent.”
MAjOR says he spoke to the artist’s family and they gave him their blessing to adopt the name: “I feel as if I can carry on his legacy.”
And with that inspiration, the Montrealer has set himself on a course to find his voice in the area of music that has become his life’s passion.
He has had a taste of the bright-lights when he opened for renowned Hip-Hop star, Nas recently at the Metropolis.
He is fully aware of the challenges of breaking-out of the little box that is Montreal on the music scene, but remains undeterred.
“I’m sure we can have stars coming out of Montreal,” he says. “Look at Toronto. No one thought it could’ve happened there.”
And he’s putting the world on notice as he readies himself to release his first EP, aptly titled “Parchment,” reflecting music that has been written and stored for release at the proper time.
“I think “Parchment” will be a good way to introduce myself to the world and also prepare a way for me to move forward.”
In 2012, he launched the “LiViNGMAjOR” brand, bringing together his work as a musician, film director and line of merchandise.
Looking forward, he is negotiating on a film project that he hopes will be another positive cultural landmark for Canada and beyond.
“It’s all going to come together soon,” he says confidently.
“Right now the mindset is to show others that with the right drive and ambition we are all capable of doing whatever we want with our lives and pursuing our dreams.”
Check out Major at Facebook LiViNGMAjOR