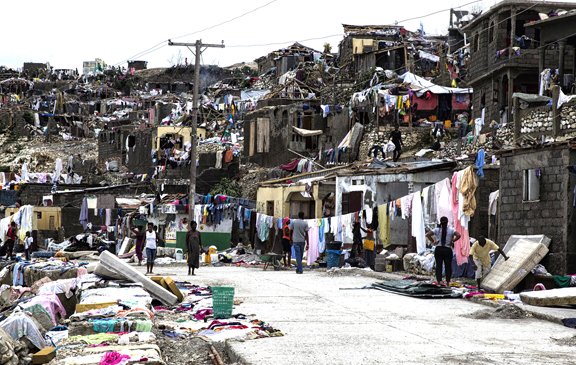 Once again the call for help is sounded around the world as hundreds of thousands of Haitians face the threat of cholera and famine after the country was battered by Hurricane Matthew on October 4.
The United Nations launched a $119 million US appeal on Monday to assist with the humanitarian crisis that is threatening about 750,000 people in southwest Haiti. The organization says more than 300,000 are in shelters across the region.
Also, the Red Cross has launched an emergency appeal for $6.9m and Unicef said it needed at least $5m to meet the immediate needs of 500,000 affected children.
Six years after the country crumbled under a powerful magnitude 7 earthquake that killed an estimated 200,000 and displaced about one million and four years after Hurricane Sandy swept through killing about 54 and displacing 250,000, Haitians are again looking to the world for help after the category four Hurricane Matthew ravaged cities and farms along its southern peninsula.
United Nations experts on the ground say there is an urgent need for food, clean drinking water and shelter if they are to beat back the threat of cholera that has already stricken a wide cross section of Haitians following the other two catastrophes.
As it has been in the past, aid has been very slow getting to the Haitian people. The Quebec government and the City of Montreal have pledged $560,000 and community leaders are asking Montrealers to donate to the Canadian Red Cross.
Meanwhile, the Caribbean community, many facing financial constraints are reaching out to the people of Haiti with much needed humanitarian relief.
Two days after Matthew struck, Venezuelan President Nicolás Maduro announced that his country was preparing to send an estimated 700 tons of relief supplies to Haiti.
Cuba, which was also struck by Hurricane Matthew, also responded quickly by sending out a group of 38 health professionals, trained in disaster medicine and infectious disease containment.
They will join an estimated 1,000 other Cuban healthcare workers in Haiti who have been leading the fight against the rapidly spreading cholera epidemic.
Meanwhile, in the midst of this disaster there is a lot of skepticism surrounding the call for aid, especially following revelations that the American Red Cross squandered about $450 million US, which was to have been used to build communities across Haiti after the earthquake and super-storm Sandy.
According to reports, the charity raised the money with a promise to build thousands of homes to rescue the hundreds of thousands of Haitians living in squalor but only built six permanent houses.
The Canadian Red Cross, which is hoping to raise $7 million to help in the relief efforts following Hurricane Mathew, has been quick to distance itself from its American counterpart.
Stephane Michaud who runs the emergency response operations for the Canadian Red Cross in Ottawa was recently quoted saying: “Money given to the Canadian Red Cross will be managed by the Canadian Red Cross.”
He assured Canadians that money donated for Haiti would go directly to the country. The Canadian Red Cross is for Hurricane Matthew relief efforts in Haiti.
Matthew also did extensive damage in other Caribbean islands, including St. Vincent, Jamaica and the Bahamas.