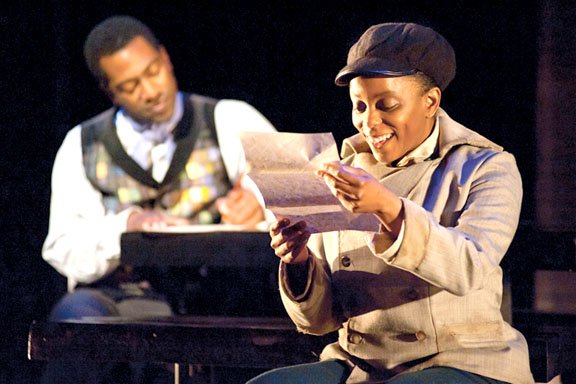 For many of us, when we think of legendary German composer Ludwig Van Beethoven, we think of

the music he created and ‘gifted’ to the world. We rarely think about Beethoven as a man, as a person who struggled to bring his creative visions to life.
That is the premise of Beethoven Lives Upstairs, a play that returns to Geordie Productions, a professional children’s theatre company here in Montreal, in April.
The show tells the fictional story of when Beethoven moves in with a boy named Christoph and his family while trying to finish off his Ninth Symphony. Beethoven is temperamental, struggling with hearing loss and kind of odd, and Christoph isn’t impressed with his new neighbour.
The boy finds some comfort and a sympathetic ear in his uncle, to whom he writes letters about the experience. In turn, the uncle helps guide his nephew to a place of understanding.
Geordie staged the play in 2011 and decided to bring it back this year as a farewell to its artistic director, Dean Patrick Fleming, who will leave at the end of this season, the theatre’s 35th.
The original cast from the 2011 version is returning, including Alex McCooeye as Beethoven and Black Montrealers Lucinda Davis and Quincy Armorer, who star as Christoph and the uncle respectively.
Both actors say reprising their roles in the play was an easy decision – working with Fleming on his final production was a big draw – but Armorer, who is also the artistic director of the Black Theatre Workshop, said everyone from the cast to the crew is a friend, which made the choice to come back even more simple.
The play is geared toward those ages 6 and up. Davis, who is a two-time winner of Montreal English Theatre Award for outstanding female actor, said doing shows for young audiences can be a challenge.
“They are very unapologetic in terms of what they watch; they either love it or they don’t love it, and if they don’t love it they’re not quiet about it,” she said. But the rewarding flipside to that is a play wins over a youth audience. “You feel the connection, this commitment that they’re just completely wrapped up in the world.”
Davis describes her character as a typical kid, about 10-years-old, dealing with some major upheaval in his life – his father dies, he’s adjusting to having young siblings, and he’s dealing with a new upstairs neighbour. He leans on his uncle to help make sense of his new reality.
“When you have someone [playing the role] as charismatic as Quincy, who’s a very warm and open actor, you trust the uncle. He’s very loving and kind,” she said.
Armorer says his character is very aware of the stature of the man living with his nephew, to the point where he’s even possibly slightly jealous. The uncle sympathizes with Beethoven’s struggle, trying to finish a masterpiece while going deaf, and tries to encourage his nephew to have some compassion as well.
The two correspond in letters, but the play brings those letters to life in various ways, including using puppetry. Mixing the different forms of storytelling also contributes to keeping the audience engaged, Armorer said.
Another key role is the one played by Beethoven’s music – woven into the story at different moments, Armorer said that in a way the music acts as the sixth character in the play.
“It feeds everything. It sets the mood for the emotion, it brings the audience in, it drives the story forward in a very clear way and it’s awesome to hear.”
He said in past performances when Beethoven performs the Ninth Symphony near the end of the show, he has seen kids in the audience stand up and “conduct” the piece from their seats. “There’s nothing better than doing this show and getting that response from a young person. They get into the music,” he said.
While seeing two Black people cast in a play set in 19th century Vienna may come off as odd, the roles aren’t colour-specific and Armorer praised Geordie as a company that gives opportunities to the city’s actors of colour.
“There aren’t a lot of opportunities for people to see themselves represented on stage, and the fact that this show isn’t Black-specific, but that we have this relationship between uncle and nephew and they just happen to be Black … that’s one of the things people should come out and see.”
Beethoven Lives Upstairs runs weekends from April 29 to May 8 at the D.B. Clarke Theatre, 1455 de Maisonneuve Blvd. W. Tickets are $14.50 for children, $16.50 for students/seniors and $18.50 adults (all prices are before taxes).
For more information or to buy tickets, call 514-845-9810 or visit geordie.ca.