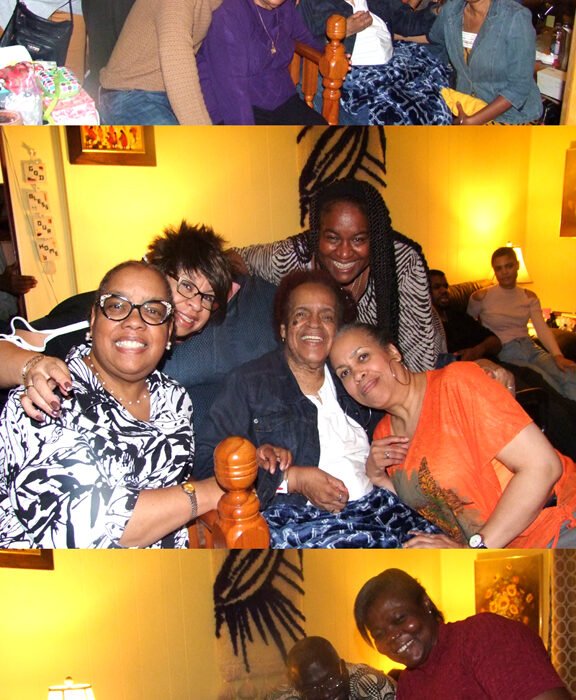 Relatives and friends came from far and wide across Canada to be with Louise Malvina Phillips Samuels as she celebrated her 97th birthday at home in the Ville St. Pierre area, which she shares with her daughter Saundra and her husband Chuma Anierobi and their son Osita.
Among those gathered for the grand event was Louise’s other daughters Dianne, Roberta and Carrie, together with her granddaughter Louisa and her sister Florence Ivy Lorenza Phillips. And there was a multitude of other relatives on hand, including nieces and nephews.
Born on October 10, 1919, in the area known as the Plateau, she spent much of childhood  at 4282 Laval Street the home of her parents, Rachel Clotillda Weekes from Demarara ( in then British Guiana) and Edwin Theophilus Phillips, from Carrington, Barbados. Louise was one of their 10 children. Her brother Clinton Raymond Phillips presently lives in Montreal.
In 1945, Louise married to Robert Samuels  at Union United Church, a ceremony officiated by Reverend Charles Este; together they raised their four daughters.
An accomplished baker and crafter in knitting, sewing and crocheting, she also enjoyed the fine art of smocking. Louise worked her way up to the position of forelady in a successful garment factory on St. Lawrence Blvd on The Main.
She  was one of the first Black members of the Montreal Volunteer Bureau, where she volunteered in St. Henri and Westmount for many years.
Reverend Emmanuel Ofori of Union United Church  offered the benediction for the evening. She remains a proud lifelong member of the church.