Advertise with Us
Home News Eyes set on Rio 2015 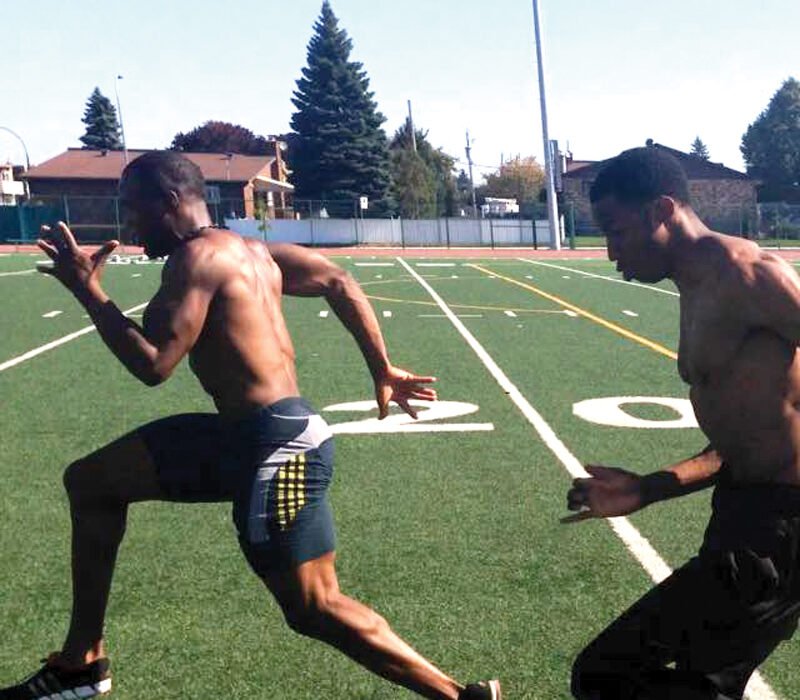 Young SVG sprinter needs some help getting there

When Joel Jacobs left his native St. Vincent and the Grenadines (SVG) five years ago to attend Concordia University on a partial athletic scholarship with help from his country’s Olympic committee, he had one thing on his mind: all roads lead to the 2016 Olympic Games in Rio, Brazil.
Today, the 100-metre specialist is well on his way to making his Olympic mark for SVG and taking his place among the long list of Caribbean sprinters who have distinguished themselves at the games in the recent past.
But there have been a lot of pitfalls along the way.
Jacobs told the CONTACT recently that although he’s confident that he has what it takes to run on the world stage he has been hobbled by more than his share of injuries and setbacks, many of which could have been avoided if he had the means to do so.
“My biggest problem is not being able to maintain the most basic lifestyle of a world class sprinter,” says the 25-year-old. “Having to go to school, work and constantly worry about having enough money to meet basic day-to-day expenses makes it extremely difficult to eat, train and rest properly.”
As a result, Jacobs says it has been really difficult for him to maintain his fitness and steer clear of  “unnecessary injuries.”
Over the last couple of years, his training has been interrupted by hamstring and knee injuries, which have kept him off the track for several months and hampered his progress.
It’s all very frustrating for the youngster who has been able to clock an impressive 10:05 sec. (hand-timed) in moderate form.
He says he has no worries about getting to the Olympic qualifying time of 10:4 secs. if living and training conditions were right. Especially now that he is training with former Olympic sprinter Joel Mascoll, whom he credits for taking him to the next level.

Mascoll, who represented SVG at the Olympics in Atlanta in 1996, told the CONTACT that Jacobs has “potential” despite the mountain of setbacks he has faced in the recent past.
“Since I started working with Joel, I’ve seen him adopt a good work ethic and a better understanding of the technicalities of sprinting…I’m not worried about speed, that will come,” says the former SVG speedster. “As far as preparation towards his Olympic aspirations go, he is in a good place.”
However, Mascoll says, he is quite aware that Jacob’s financial predicament could be the biggest stumbling block in his way to elevating to world-class status.
The rigors of work, school and worrying about money does not go with world-class track and field,” says the former Olympian, who himself had to scratch for the necessary resources to make it to the Atlanta games.
“Money and adequate support from Caribbean governments have always been a setback for athletes in the region,” he says. “That’s why so many have had to try to make it on their own.”
Jacobs understands this and is doing as much as he can to help himself.
Last year, he managed to secure a month-long training session at High Performance Centre in Jamaica, a training ground for a line-up of Olympic medalists, including current world record holder Usain Bolt.
Jacobs was able to convince centre director Leo Browne to allow him an opportunity to work with, and learn from, some of the fastest men on earth.
Back in Montreal, Jacobs is readying himself for the long and difficult haul towards his Olympic dream. But he needs help to eat and train properly in order to get to that state of preparedness to be on his mark against other global speedsters.
“At the most basic level it takes about $25,000 per year for an athlete to cover expenses and stay focused on training,” he surmises. “Without help from government, we’re forced to look to others to lend a hand.”
After testing himself against many worthy competitors, the young sprinter is confident that he has what it takes to compete on the world stage, but he needs a push.
So the call goes out to community to lend a hand and probably help lay the foundation to glory.
Contact Joel Jacobs at general.cat @hotmail.com or call 514-243-2425.