Advertise with Us
Home News Ebola continues to run rampant 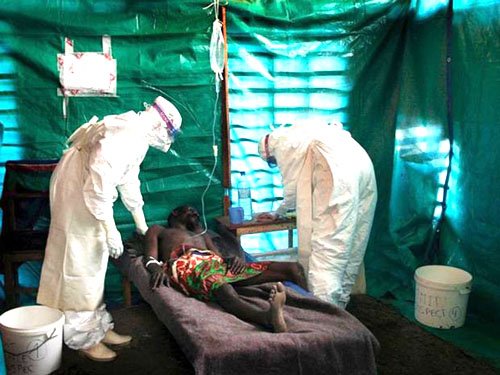 Nearly 18,000 people have been diagnosed with Ebola and almost 6,000 have died from it since the outbreak began earlier this year

a highly touted target in the fight to contain the Ebola outbreak in western Africa, the situation is improving, say the World Health Organization and the United Nations.
And while the global response is being credited as the reason for that improvement, not everyone is satisfied with the level of aid coming from outside countries.
In October, the U.N. set a goal to isolate 70 per cent of the sick and safely bury 70 per cent of the dead in Guinea, Liberia and Sierra Leone by the first day of December. The objectives were presented as key to stopping the spread of the sickness.
The target was met in Guinea and Liberia, but not Sierra Leone; it announced Dec. 1, but Anthony Banbury, head of the U.N. Ebola Emergency Response Mission, kept his message upbeat.
“The global response to the Ebola crisis has succeeded in turning this crisis around,” he said. “But clearly there are places that are still in serious crisis.”
The turnaround is being at least partially attributed to a greater number of beds available to treat the sick. In Sierra Leone, there are more sick people than there are beds to isolate and treat them in, which could explain why it is home to many of the areas that are still seeing a spread of the disease.
Nearly 18,000 people have been diagnosed with Ebola and almost 6,000 have died from it since the outbreak began earlier this year.
The Canadian-made vaccine for the disease is one of the potential antidotes being fast-tracked through clinical trials, but there is no word yet on how soon it may be approved and used on the ground.
While cases are declining or stabilizing in areas of Liberia and Guinea, experts warn the fight is far from over.
“We hope that what we’re seeing in Liberia will continue, but unfortunately what can happen with Ebola is that it can go to new countries, as it has already to Mali,” Dr. David Heymann, an Ebola expert who previously worked for the World Health Organization, told The Associated Press. “The most dangerous thing would be if people now think Ebola is over and become complacent.”
And the financial situation of the hardest hit countries is also worsening – the World Bank released a report Dec. 2 that predicts Guinea and Sierra Leone will be pushed into a recession next year.
“This report reinforces why zero Ebola cases must be our goal. While there are signs of progress, as long as the epidemic continues, the human and economic impact will only grow more devastating,” said World Bank President Jim Yong Kim in a news release.
In November, the U.S. announced that due to a decrease in the number of cases, it was scaling back the size and number of Ebola clinics it had initially promised to build in Liberia.
U.S. President Barack Obama is now asking, again, for Congress to approve a $6-billion emergency aid package, adding that the “fight is nowhere near over.”
Medecins Sans Frontieres, which has had its personnel on the ground in the affected countries since March, has been vocal about its disappointment with international response, and MSF President Dr. Joanne Liu is still none too impressed by the West’s pitiful response.
MSF says foreign governments have their attention focused on building areas suitable for case management, but they don’t have the manpower to properly assist the patients.
Staffing those treatment areas is left up to national authorities, local healthcare staff and NGOs, which do not have the expertise required to do the job.
“People are still dying horrible deaths in an outbreak that has already killed thousands. We can’t let our guard down and allow this to become a ‘double failure’: a response that is slow to begin with, and then is ill-adapted in the end,” said Liu.