Dominica and the Aftermath of Hurricane Maria 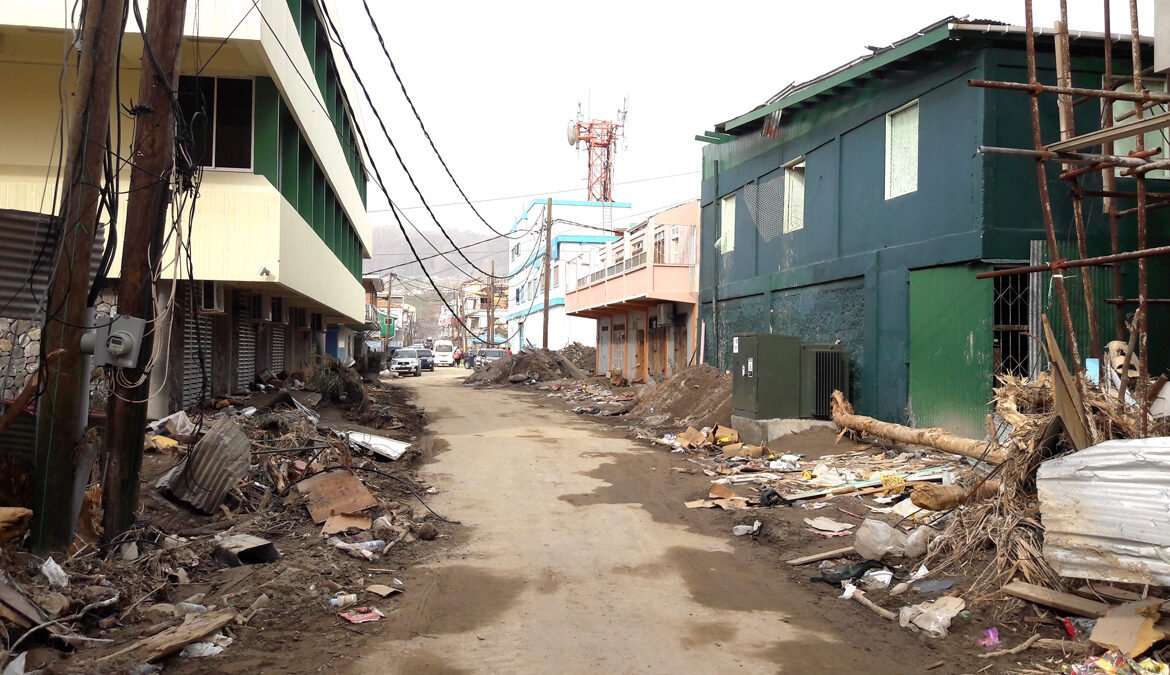 The island of Dominica continues to reel after it was dealt a lethal blow by Hurricane Maria. The verdant Eastern Caribbean island of 73,000 people, felt the full force of the hurricane when it struck in the dead of night on September 1, bringing a deluge of rain and winds in excess of 165 miles per hour and leaving behind a trail of death, destruction and mountains of  debris.
After Maria’s  six-hour rampage of the ‘nature island,’ daylight revealed post-apocalyptic scenes of widespread destruction: collapsed houses and buildings, blown out roofs, land slides, mud, toppled trees, and electrical poles and galvanize scattered on the landscape like crumbled paper.  All major roads were blocked, bridges wrecked, the main hospital and health centers, ports, airports, and schools damaged.
Communities were cut off each other, and the country was cut off from the world, 32 people  killed and 50 reported missing.
In the days that followed, people were in a daze struggling to understand the disaster. With no electricity, water or telephone service, food shortages and the land of ‘many rivers’ had polluted river water.
Remote communities had to be serviced through urgent air drops of food and water provided by the French government.  In an interview with ABS Radio Antigua, an emotional prime minister, Roosevelt Skerrit described the situation as unprecedented.
“It has been brutal, we have never seen such destruction,” he said. “ Every village on Dominica, every street, every cranny, every person has been impacted by the hurricane.”
Before Maria, Dominica was a green oasis of lush, mountains, rivers, and valleys, referred to as ‘The Nature Island of the Caribbean,’ with an economy dependent on agriculture and a growing tourism sector. Maria destroyed completely all agriculture and severely damaged the tourism infrastructure.
One month after the hurricane the challenges that the country faces are evident: food shortages, few supermarkets and shops have opened. The capital Roseau is still under a strict 6pm -6am curfew, some businesses banks government offices have started to open with limited hours but schools remain closed. With a large number of roofless buildings still standing bare, there is a dire need for tarpaulins.
The immediate and long-term challenge ahead for this small island are insurmountable. Apart from having to practically rebuild the country’s infrastructure authorities will need  to keep an eye on immediate risks. Montreal based Dr. Patrick Cloos who recently returned from a two-week MSF (Doctors Without Borders) medical mission suggests that key among these risks are the possibility of a spike in poverty as a result of the loss of jobs from the agriculture and tourism industry.  Other risks are that of vector borne disease and epidemic outbreaks. “The country will have to take immediate and long term measures relating to environmental waste disposal of the debris dump” he says. Some long term challenges will be psycho-social heath and the arduous task of rebuilding a resistant and sustainable infrastructure.
The deadly force of   Maria has placed the climate change debate in sharp focus. Observers suggest that the hurricane underwent a dramatic intensification from a Category 1 to a Category 5 in less than 24 hours. Demonstrating a compact, powerful eye wall 15km in diameter, and hurricane force winds across a 60km diameter, the system was fed by high sea surface temperatures.  Sea temperatures in the Caribbean region are now several degrees above average and it is these warm waters that provide the energy for rapid hurricane development.

Dr Keith Mitchell, chairperson of CARICOM  and Grenada’s prime minister, Maria has presented a watershed moment that forces the “entire Caribbean region to now rethink building codes, materials and engineering to withstand future storms”.
The regional and international aid response to the disaster has been robust: A number of CARICOM member states, international Governments including Canada, UN and other international agencies and NGOs  are on the ground assisting with search and rescue, emergency health response, food and relief distribution among others.  This is the moment when Dominica will need all the help it can get.

The Dominica Montreal Island Cultural Association and a special relief team has mounted a relief effort aimed at assisting with much needed items for the country. These items will be shipped to Dominica in the coming weeks so the commity seeks kindly your urgent assistance with this venture.

TO DOMINICANS and THE COMMUNITY AT LARGE:- WE HAVE BEGUN
THE RELIEF PROCESS AND NEED VOLUNTEERS TO ASSIST WITH
PACKING THE RELIEF ITEMS TO BE SHIPPED TO DOMINICA..

MONETARY CONTRIBUTIONS  MAY BE MADE BY DRAFT Or MONEY ORDER PAYABLE
TO:- DOMINICA ISLAND CULTURAL ASSOCIATION OF MONTREAL.