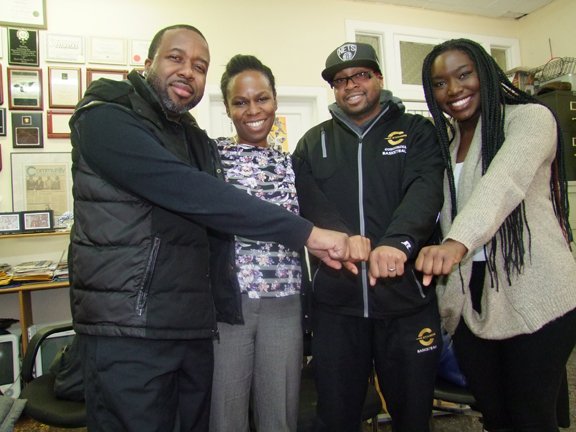 With a dropout rate of over 38 per cent: Crisis Looms

There’s no denying that in Quebec, the Black community as a whole fares badly on all of society’s socio-economic indicators.
But things are particularly bad among our young whose struggles extend from the youth criminal justice system where they represent well over 35 % of those caught up juvenile detention centres or foster homes; to the classrooms where close to 40 % fail or leave before graduating right into the workforce where most end up in dead-end jobs.
Not surprising that some see it as a looming crisis.
So there was an underlying a sense of urgency when   a group of community workers sat at the offices of the CONTACT to outline their plans to break that cycle of desperation that has locked in so many young English-speaking Blacks
Tamara Hart, is the newly installed executive director of DESTA Black Youth Network, a little Burgundy based organization working with marginalized youth.
They have recently joined forces with the Cote Des Neiges Black Community Association (CDNBCA) to work with in conjunction with the English Montreal School Board to implement a high school completion program that they hope will steer young Blacks back on to a course of personal development.
“When we look at a 38 per cent high-school drop-out rate  (identified in a 2010 demographic study released by McGill University,) we know that our youth are in crisis, so it’s important for the community to come together,” Hart says
“In the past because of funding issues and the lack of resources we have been working in silos with the various community groups competing against each other, we’re not doing that anymore. Today we’re trying to collaborate especially on this very important issue of helping our youth.”
“What we need is a culture of education and literacy in our community,” says Kidel Reid education coordinator at CDNBCA. “We’re highly regarded in areas such as athletics and entertainment while many of our youth struggle to get past high school. We have to change our concept of success.”
The project is called the Community Academic Achievement Program (CAAP) and the aim is to assist individuals of all ages who want to complete high school or enhance their literacy skills by offering high school equivalency courses in math and English in an alternative setting.
The days, duration and hours of the program are all flexible and accommodate the needs of participants.
The ESMB will supply the teachers but the courses will be delivered in the community in classrooms that will accommodate the needs of those who are out of place at conventional schools.
Rachelle Rose is another member of the DESTA team on the frontlines of this project. In her years as the organizations education coordinator she says she has heard her fair share of stories of horrors stories students have suffered in classrooms, to the extent where many of them are psychologically scarred.
“In many instances we have to work to rebuild their self esteem and their confidence,” says the recent Social Work graduate from McGill University.
She says the challenge is to get these students back into classroom where they feel valued and participate fully in the learning process.
The biggest challenge the project faces is to attract as many participants as possible in a way as to make a dent on high number of students who are without a high school diploma.
Denburk Reid, a former professional basketball player and stand out at McGill University, now working with several community organizations is confident that the collaboration between DESTA and CDNBCA the way to go.
“This partnership will widen the reach of the program,” says Burkie as he is known among an army fans and followers across Montreal.
He added that: “With more than thirty eight percent of our students dropping out of school almost everyone knows someone who will benefit from this program and has to encourage them to participate.”
Hart, who has a BA in ### and a Masters in Educational Technology from Concordia University, is also confident of the project’s capacity to deliver.
“What we have in place is a solid model that can be very useful to our community,” she says.
And according to Kidel Reld although the focus is to get high school certificates in
the hands of participants the program  goes way  beyond  that with a capacity to offer tutorial assistance in other areas of study and interest.
He says that’s especially pertinent  at the CDNBCA where many participants are new immigrants or single mothers that fall into a higher age group with different aspirations.
The project coordinator are calling on all educators in the, especially those who are retired, to get involved what  Hart describes as a “critical community initiative” to help students who are struggling to learn and other vulnerable individual get back on a path to learning.
These former teachers, principals and other educators all have the capacity and the experience to help make this program a success and we’re hoping that they will get involved.
And as Kidel Reid alludes: it has to be a community wide efforts, with all capable hands on deck in order to cultivate this much needed culture of education and learning that will put us all on a path to better partake and participate in this society.
For information on the Community Academic Achievement Program call the CDNBCA at 514 737 8321 Ext. 221 or DESTA  Rachelle Rose at  514 932 7597