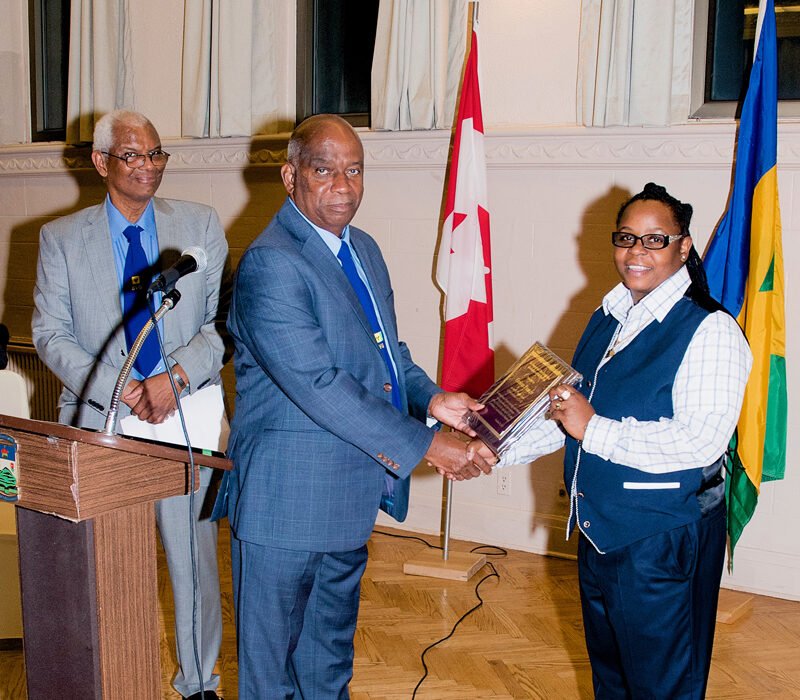 Following their mega banquet celebrating the 50th anniversary of the founding of the St. Vincent and Grenadines Association of Montreal, held in May, members and supporters of the Association gathered again for the 36th annual Independence Banquet and Ball on October 24 at Schofield Hall in the Town of Mount Royal (Montreal).
The  event provided the Association an opportunity to honour two of its members, Ms. Rosmond Ryan for her work in education and various community organizations, and Carleen Francis for the exceptional service she has provided at the many annual functions organize by the Association.
The event got underway with Association president, Mr. Alfred Dear, reading the address of the prime minister of St. Vincent and The Grenadines, the Honourable Dr. Ralph Gonsalves.
It was followed by salutations from other dignitaries, including Consul General Fitzgerald Huggins, who was unable to be present, but his message was read by H. Nigel Thomas.
One of the highlights of the evening was the feature address delivered by Ottawa-based lawyer Taisha Lewis, JD. Her topic was “Onward and Upward: A Toast to the Next 36 Years.”
She kept her audience rapt as she outlined a clearly defined vision that can put SVG on a path to   success and growth for the next three-and-a-half decades.
The vision will focus on basic matters such as health, prosperity, the building and maintaining of strong families, empowering youth through education, and giving back to the community inside and outside St. Vincent.
Other highlights included performances by Cortez Goodge and calypso Ian Puffy (Gregory McDowall).
Archdeacon Jim Bennett kept guests enthralled with his quiz on Vincentian history. Mr. Tony Hadley served as master of ceremonies.
The excellent food was catered by Best Bite. New Concept Crew provided the dance music.