Blazing a trail on the Basketball Court 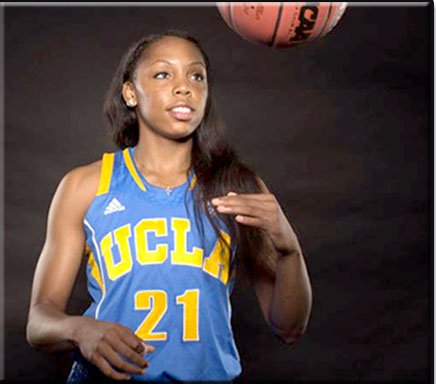 Twenty-two-year-old Nirra Fields has grown accustomed to dealing with big moments. So when the Phoenix Mercury drafted her as the 32nd pick overall, making her the first Montrealer to be drafted into the WNBA, it wasn’t totally unexpected to her.
“I’ve been consistently working hard to keep my game at the highest level for an opportunity such as this.  Now it’s up to me to make the best of it,” she says.
And so it is for a young woman who started excelling on the basketball court at Lakeside Academ

y, so much so that she was whisked away to several prep schools in the States, paving the way for her to play the game at the highest level and leading to a standout career in the NCAA with the UCLA Bruins, a sensational gold medal win with the Canadian national team at the 2015 Pan Am Games in Toronto, and now to the WNBA.
Although many helped open the way for her, she says all praises go to her mom.
“I was about thirteen- or fourteen-years-old and I knew I wanted to play with the best players when the opportunity came for me to come to the United States. My mom had faith in me and allowed me to go after my dreams. I have to thank her for believing in me.”
And as she prepares to take her place in the WNBA, she says she is mindful that she will be among the best women basket-ballers in the world, but she is confident that she has what it takes to hold her own.
“It’s an opportunity that not a lot of people will have, so I’m thankful for it and I feel blessed,” she told the CONTACT in a recent telephone intervie

w. “I also know that when such opportunities come you are responsible for your own success: you have to eat properly; you have to keep your body in shape, and you have to produce on the court. It’s up to you to be motivated and accountable.”
She says she expects her entry into the league to be somewhat like her freshman year at UCLA, when it took some time for her to adjust to the level of the game, but she expects to grow into it real quick.
“I would like to be at the top of my game as soon as possible.”
Her history shows that anything is possible on the court.
She shot into the spotlight as one of the bright lights with Team Canada at the Pan Am Games, playing all five games and leaving her mark on the tournament. She averaged 8.6 points, 2.8 rebounds, 1.0 assists and 1.0 steals per game as the gold medal-winning Canadian Team went 5-0.
Her highlight game was against Brazil when she scored a tournament-high 15 points with two rebounds and one steal in 19 minutes off the bench.
Primed by the success of the Pan Am Games, Fields says she is looking forward to getting back on the court with her Canadian teammates for the upcoming Olympics in Rio, and is confident that they will be able to medal.
She also left her mark at UCLA where she stamped her name on eight of the school’s Top Ten All Time list in scoring, field goals made, field goals attempted, free throw attempts, steals, 20-point games, three points attempted and three points made, and leaves the fourth-leading scorer in the university history with 1,867 career points.
She is only the ninth UCLA player to be drafted into the WNBA.
Looking back on her road to success, Fields says a lot of it has to do with growing up with six brothers, five of whom are older, and playing basketball and football with them.
“They were so strong that by the time I got to playing with the girls, it seemed really easy.”
And her skills became apparent early in life.
After a standout year at Lakeside Academy she moved to the US where she piled up the accolades in high school competitions.
At the prestigious Mater Dei High School in Santa Ana, California, she averaged 22.3 points, 7.1 rebounds and 4.5 steals and led them to a state championship. She also became the first female Canadian to be named to the McDonald’s All-American Game.
A proud Montrealer, Fields relishes the opportunity to come home ever so often to share her story as a way of motivating others who are on the same path. Like she did in mid-April when she made a one-day stopover at the NDG-YMCA’s Montreal Classic Hoops, a local tournament in which she has participated many times in the past.
As always, her message to young players is to go after opportunities as they present themselves, remember your education, and be consistent.