Clinton, Obama and now Biden have all done them wrong 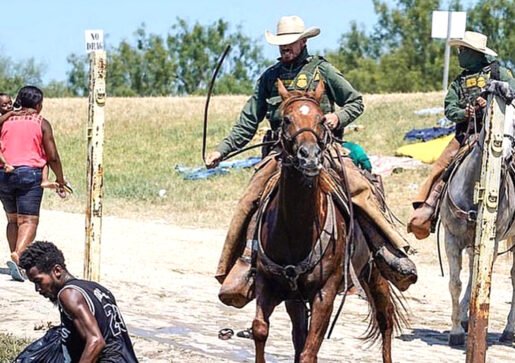 The UN High Commissioner for Refugees (UNHCR) estimates that of the 82.4 million forcibly displaced people in the world at the end of 2020, about a quarter of them, probably 20 million or so are refugees, seeking a place of refuge from squalor, violence and hunger.

The United States of America, probably the most affluent nation in the world today, certainly the mightiest, offers a place to 18,000 refugees that year. Compare that to the 3.7 million Turkey is providing a home for.
That’s the backdrop to the horrific story of human suffering that has been unfolding under a bridge in the Texas border town of Del Rio, where about 15,000 asylum seekers many of them Haitians who have been on the move since 2010, when a massive earthquake devastated their country.
The brutality and indignity heaped on these refugees, who are being rounded up and whipped by US border patrol guards on horse-backs harken back to the dark days of suppression and oppressions suffered by other generations of Blacks in the US.
After they are whipped and rounded-up thousand of them will be put on planes and dumped in Port au Prince, spokespersons for the department of Homeland Security are quoted as saying that eight to ten of those repatriation flights will be in motion soon.

In choosing to carry out and further what has been most recently, the dehumanizing immigration policies of the former president, Donald Trump, the administration of Joe Biden and Kamala Harris reflects the moral bankruptcy of the United States when it comes to those considered “aliens.”
But to pin those policies on the back of Donald Trump is in itself intellectual dishonesty because the actions of the Biden Administration today is an exact replay of another “nice and friendly” president, Barak Obama who in 2016 carried out the same rounding-up of Haitian asylum seekers in the same area and horded them back to a country that was teetering on the edge of becoming a failed state.
In fact, one year into his administration, President Obama signalled his unconscionable anti-Haitian attitude by allowing his Department of Homeland Security and its Immigration and Customs Enforcement (ICE) agency to target an estimated 30,000 for removal.

That’s in 2009, months after Haiti was devastated by a series of hurricanes and tropical storms that killed close to a thousand ravaged much of its infrastructure and cast tens of thousands of Haitians in a humanitarian crisis.
It’s a nasty, nasty attitude by successive American presidents and administration towards people who through no fault of their own have been cast as pariahs, while their country has been a feeding ground for poverty pimps and international hustlers.
While thousands upon thousands of Haitians are breaking their necks to get out of Haiti,
thousands upon thousands of NGOs (non-governmental organizations) scrambling over each other trying to get in.
Known in the circle as the “Republic of NGOs,” Haiti is home to close to 20,000 of these international organizations “helping” the Haitian people. They’ve been “helping” them for decades.
Identified among the biggest culprits of exploitation is The Clinton Foundation, an outfit put together by Bill and Hillary Clinton that might be singlehandedly one of the most detrimental forces in the impoverishment and bankruptcy of Haiti.
It was Bill, who as president of the United States that wiped out the country’s thriving agricultural industry, driving Haitian farmers off their land while subsidizing USA farms to produce food for Haiti.
It was the same Clinton Foundation that was given the responsibility to rebuild the country after the 2010 earthquake that killed close to 400,000, displaced 2 million and devastated the economy.
More than $10 billion was raised internationally to help restore Haiti. The money magically disappeared and the place conveniently remained “the poorest country in the hemisphere.”
But it wasn’t always so. This nation of hard-knocks was founded out of the fires of defiance, with a slave revolt and an extended war of independence (which it claimed in 1804) that humbled France and several other global super-powers of the day.
As the first Black republic in the hemisphere, it endured the brunt carried the burden of hatred and resentment that emanated from periods of slavery, colonialism, post colonialism right on to the sham of globalization.
As their country wilted under exploitation throughout the 1960s and 70s right on to now, Haitians tried to run to the nearest port of hope, the USA but they were not welcomed. The “fair” skinned Cubans were.

So today another 15,000 of them are camped out under a bridge in a little town on the Texas border. Some with their families have journeyed 7,000 miles through the jungles of Latin America to get there.
Now they are preys of President Biden’s horseback immigrant predators.
They’re afraid to go home.