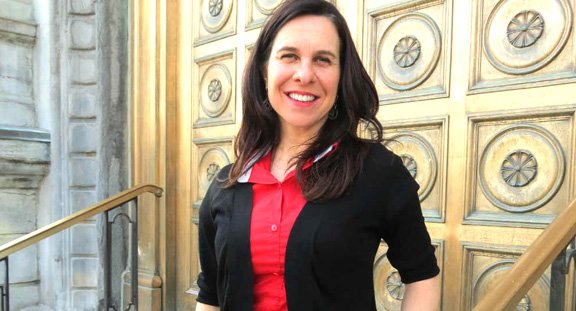 On November 16, Valerie Plante, a 43 old mother of two takes the mayor’s seat at Montreal City Hall, becoming the first woman to hold the job in the city’s 375 year history after leading her party Projet Montreal to an unexpected sweep in the November 5, municipal elections.

Plante defeated the highly favored Denis Coderre whose boast of pulling Montreal out of decades of political corruption and ushering in its elevated economic standing fell on deaf ears as Montrealers cast him and many of his high ranking councilors out.

Many accused the former mayor of falling out of touch with the needs of Montrealers, turning a blind eye on the incessant traffic woes that have the city clogged for years, his wanton spending and irritating arrogance.

And have now placed the mantle of power in the hands of a life-long social justice and human rights advocate who came to them with a pledge of “getting the city moving again” with a common sense plan to ease road congestion and a revamped public transport system.

Plante, who worked for several community organizations during her 20 years living in Montreal, also extended a hand to families with a promise to build more social housing and facilitate homeownership with reduced taxes and abolishing the ‘welcome taxes’ for some families.

Projet Montreal, which entered municipal politics in 2004, swept across the city winning a clear majority of 34 seats to Team Denis Coderre’s 25.

Among the big names to lose their jobs in the November 5, elections was Russell Copeman, popular borough mayor for NDG/Cote des Neiges who was easily defeated by former Gazette journalist, Sue Montgomery, who might have benefitted from Plante’s popularity.

Also going down to defeat were two of Coderre’s political lieutenants Richard Bergeron, the environmentalists and founder of Projet Montreal who switched to Team Coderre about four years ago, and Annie Samson, a former executive committee member in charge of Transportation.

When the municipal chambers convene in mid November, the city’s visible minority communities will continue to be under-represented among the elected councilors.

For a while during the campaign many held out hope for candidates from our community, such as Tiffany Callender and Gabriel Retta representing Team Coderre in Cote des Neiges and Loyola respectively as well as Balarama Holness who ran for borough mayor under the Projet Montreal banner in Montreal North. Keeton Clarke a well-known community activist was also defeated in the Loyola district.

When the votes were counted, all went down to defeat, leaving just longtime incumbents Alan Desouza, mayor of St. Laurent and Frantz Benjamin former speaker of the chamber together with about three others representing visible minorities among the 68 elected councilors.