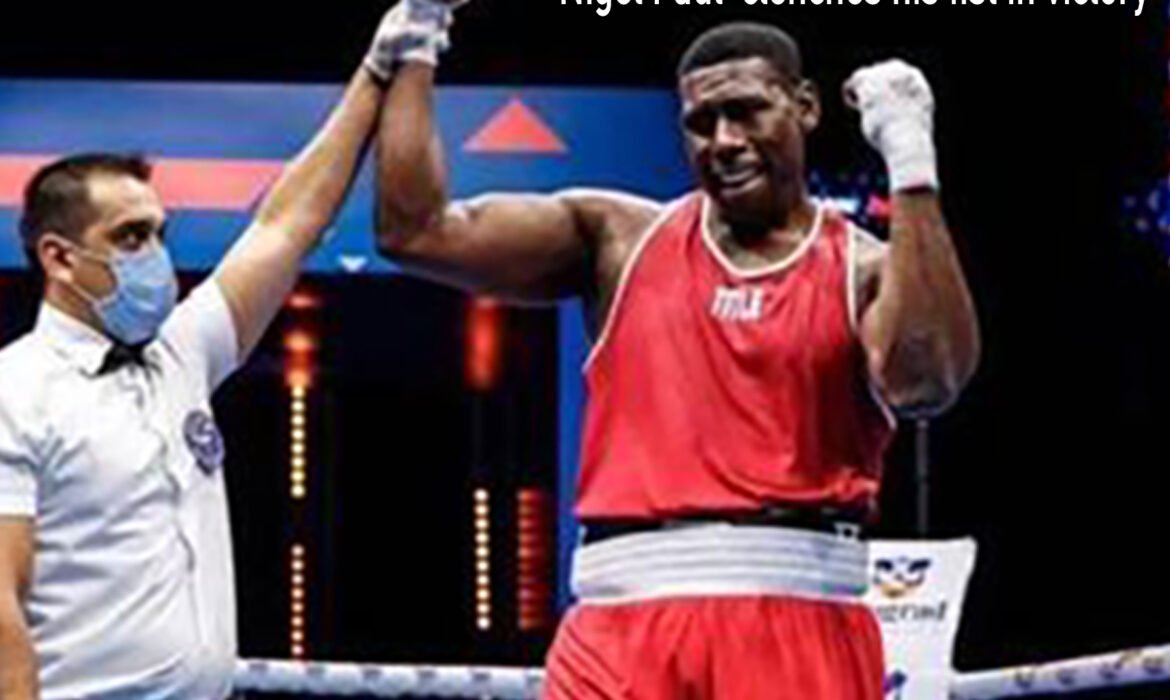 Overcoming obstacles, both inside and outside of the Boxing ring, is nothing new for Trinidad and Tobago’s Super Heavyweight boxer Nigel Paul, who was forced to train for the International Boxing Association (AIBA) Boxing Championships online via the Zoom Social Media platform, because the Covid-19 Pandemic forced the government to close the country’s boxing gyms.
However, despite this challenge, Paul’s determination, dedication and discipline to succeed against the daunting odds he faced, enabled him to stun the world amateur boxing, by winning a bronze medal in the Super heavyweight (92+k, 210 pounds) at the recently concluded AIBA Boxing Championships.
In so doing, he made history by becoming the first T&T and Caribbean boxer to win a medal at the biennial amateur boxing competitions that are organised by the sport’s governing body the International Boxing Association.
The elite championships deemed to be the highest level of competition for the sport, were held from October 24 to November 6 in Belgrade, Serbia.
Over 6005 boxers from 105 countries battled against each other in 13 weight categories to win the coveted gold, silver and bronze medals and hefty financial prizes.
In the Round of 16 quarter-final bout, Paul the towering, six foot plus T&T fighter dominated Turkey’s Berat Acar by stinging him with his laser-like left jab, keeping him off-balance and piling up points.
Once his jab found a home on Berat’s face, Paul punished him with crunching right crosses to the Turk’s jaw, and hooks to the body that kept Acar in survival mode and ensured a convincing 4-1 split decision victory over the tough Turk.
On his way to the Round of 16, Paul polished off two quality boxers.
In his opening bout he came up against Albania’s Nelson Hysa who could not withstand his punching power and then he outpunched, outfought and outlasted a quick and aggressive Spaniard Ayoub Ghadfa.
An elated Paul spoke to the media after his quarter final victory.
“After I had realized that I’d won, I was not only elated but I felt relieved that a weight had been lifted from off my shoulders,” he said. “Before and during the fight, I kept repeating my own personal mantra to myself, which is that ‘Fortune Favors The Brave’ and this helped me to push through the adversities I faced and strive to win.”
The powerfully built Paul, 32, who hails from Chaguanas in central Trinidad, then faced an aggressive and wily Russian, Mark Petroskii in the semi-final.
“The majority of the crowd were Russians but I silenced them during the fight because of my performance. When I went back to my corner between rounds, my coaches (Reynold Cox and Russell Dopwell) were pleased with my work rate and I felt good about what I was doing,” said Paul.

Paul said while he was working very hard to win the first two rounds by punching the Russian’s upper body and face with some power shots, he admits that he gave Petrovskii too many opportunities to score points and then grabbing him to prevent him from punching.
However, in the third and final round, with seconds to go before the final bell, Paul smashed Petrovskii flush on his face with a punishing straight right that dropped the Russian to the canvas.
The referee gave a visibly hurt Petrovskii a standing eight count, then just as Paul was moving in to finish him off, the Russian was saved by the bell.
However, when the final decision was made by the judges, the Russian was adjudged the victor, leaving many observers to wonder how Paul lost the fight.
During the latter phase of the AIBA competition, there was no third-place box-off so both defeated semi-finalist boxers were awarded bronze medals.
When asked by Montreal Community Contact if he was considering becoming a professional fighter in the foreseeable future, he said this is dependent upon how he feels after competing in the 2024 Paris Olympics.
“That’s something myself and my coaches would have to consider very carefully because I also have to consider my age before I make such an important career decision,” he said.
Whichever road Nicholas Paul decides to take in his boxing career, he will be fighting with all of his might to bring more boxing glory to his homeland.