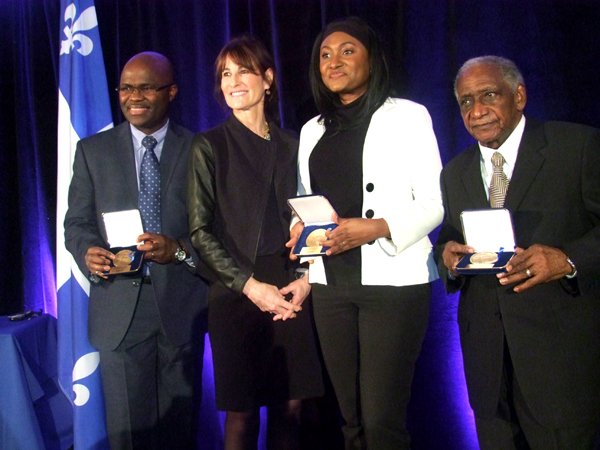 Long-serving president of the Jamaican Association of Montreal, Noel Alexander, was among three community members to receive a National Assembly Medal as part of the Quebec government’s observation of Black History Month.
Also receiving the commemorative medal were Fabienne Colas, founder of the International Black Film Festival of Montreal and . Benoît Songa, a much heralded community worker who heads the Centre RIRE 2000 de Québec, an organization that partners with the Quebec government to integrate immigrants and professionals.
The medals were handed out on Monday, February 23 by Kathleen Weil, minister of Immigration, Diversity and Inclusion, who commended the recipients for their contributions and that of the community in the development of Quebec.
The minister says the work carried out by Alexander Colas and Songa contributed in furthering the fight against racism and discrimination in Quebec and strengthened bonds of unity among Quebecers.
“This type of involvement needs to be underlined because it changes the world,”
she says.
In receiving his medal, Alexander challenged the Quebec government to do more to recognize the unique situation faced by Black English speaking Quebecers, whom he says are for the most part marginalized because of language.
He reminded the minister of the work done by members of this sector of the community in initiating Black History Month celebrations in Montreal, and called on the provincial government to recognize the long history of Black English speaking Quebecers in the development of this province.
Weil acknowledged Alexander’s sentiment, saying that recent consultations on the Black community by her ministry uncovered issues of marginalization of young Quebecers who are Black and whose mother tongue is English, but many of whom are fully bilingual.
She says her department is engaged in bringing forward projects and policies to address some of the issues.

DEHUMANIZATION, A MEANS TO AN END

DEHUMANIZATION, A MEANS TO AN END