The Forgotten Angel of the Battle of the Bulge 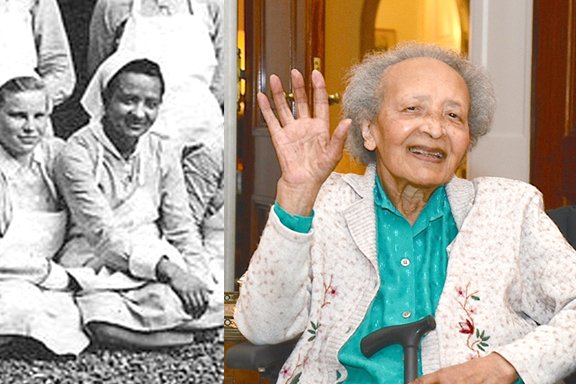 Augusta Marie Chiwy was born in 1921 in Burundi. She was the daughter of a Belgian veterinarian and his Congolese wife. When she was 9 years old she moved to Bastogne, her father’s hometown located in Southeast Belgium.
On May 10, 1940, Belgium was invaded and occupied by Nazi Germany. During the long occupation Augusta went to nursing school, and after graduating worked in a hospital in the city of Louvain, about 160 km from Bastogne.
On June 6, 1944, allied troops landed on the beaches of Normandy in France and fought their way eastward towards Germany. By December, Bastogne had been liberated and Augusta Marie’s father asked her to come home for the Christmas holidays. After a difficult journey, she arrived in Bastogne on December 16, 1944. Little did she know that her arrival there would coincide with the start of the Battle of the Bulge, Hitler’s last major offensive before the defeat of Nazi Germany.
Three German armies were now advancing west through the dense and difficult terrain of the Ardennes forest. Allied troops were hastily brought up to reinforce the frontlines and secure the vital crossroads of Bastogne. These soldiers were ill equipped for this battle, which was fought in brutal arctic–like conditions; they were soon surrounded and besieged by the German forces.
As the battle raged, John Prior, a U.S. Army doctor, knocked on Augusta Marie’s family’s door requesting help in treating the wounded and dying soldiers. Augusta and another nurse, Renee Lemaire volunteered and assisted the soldiers with almost no rest.
According to Dr. Prior, Renee preferred to circulate among the litter patients, feeding them with what little food was available and distributing the meager medication on hand. Augusta was responsible for helping with the battlefield trauma: amputations and hemorrhage control, splinting and dressing. The lack of supplies meant that they had to make use of crude surgical instruments to operate on some of the most gruesome injuries (and wounds) imaginable. At that time, U.S. Army regulations forbade the treatment of white soldiers by Black nurses. Some of the wounded soldiers told Dr. Prior that they did not want that Black nurse to touch them, to which he replied: “It’s your choice, she can treat you or you can die.”
On a number of occasions, Augusta accompanied Dr. Prior on the battlefield to rescue wounded soldiers. As they made their way to and from the frontlines they endured constant shelling and heavy machine gun fire.
When they returned with the wounded, Augusta would check look at the bullet holes in her clothing and remark, “A Black face in all that white snow was a pretty easy target. Those Germans must be terrible marksman.”
On Christmas Eve, enemy aircraft bombed their aide station killing about 30 soldiers and Renee Lemaire. Dr. Prior placed her remains in a white silk parachute that this young nurse had hoped to fashion one day into a wedding dress. He then returned Renee’s body to her parents. As for Augusta, she was blown through a wall but survived unscathed. She would continue to volunteer until Dr. Prior’s unit left Bastogne in January 1945.
The Battle of the Bulge would be the bloodiest conflict for the American Army, resulting in 20,000 dead and 80,000 wounded.
After the war, Augusta rarely spoke about her wartime experiences. Dr. Prior went on to practice medicine in upstate New York.
In 1972 he wrote in the medical society bulletin that, “The presence of these two girls was a morale factor of the highest order.”
His daughter, Anne Prior Stringer, said her father used to tell his children about a valiant 23-year-old African nurse who assisted him in the war. He made a point of praising her resilience amidst all that carnage and that he would never forget her courage.
In his research on the Battle of the Bulge, Martin King had heard about an African nurse who had saved so many lives. After an 18-month search he tracked Augusta down to a retirement home in Brussels. He petitioned the Belgian Royal Family and the United States Army to honor Augusta for her many acts of bravery during the Battle of the Bulge.
In 2011, after some 67 years she was finally recognized both by the Belgian and United States governments. In Belgium, King Albert II made her a Knight in the Order of the Crown. The United States army then awarded Augusta the Civilian Award for Humanitarian Service for selfless service and bravery. After the ceremony she was asked if she was happy to be finally honored after all this time. She replied: “Yes, I’ve had a good life. I have children, grandchildren and great-grandchildren.”
She then pointed to her head and said, “I’ve still got my marbles.”
Augusta never forgot Dr. Prior. Every Christmas until his death in 2007 at the age of 90, Dr. Prior and Augusta would send each other letters and chocolates.
Augusta Marie Chiwy died on August 23, 2015 at the age of 94. She was buried in the family plot in Bastogne.

A family photo of Dr. John T. Prior