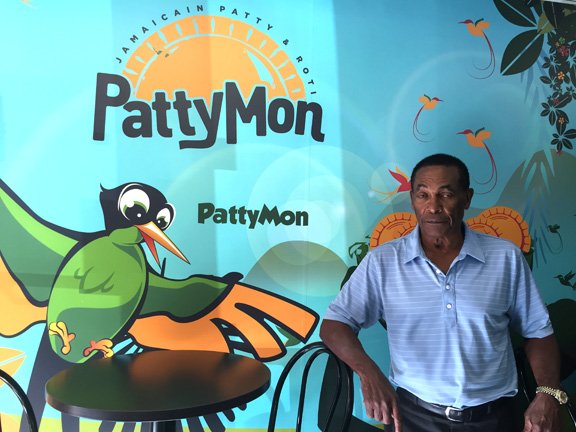 This entrepreneur has big plans for the humble patty

“Patties will always be an ethnic snack… it will always be a Jamaican patty, but I intend to introduce it as a mainstream snack food just like pizza or souvlaki here in Montreal,” so says Mr. Ray South who recently opened PattyMon Restaurant at the corner of Cote des Neiges and Cote St. Catherine roads. “Just as it is in Toronto and Vancouver where people will go and buy two patties and a drink for lunch.”
“And as you can see, from the location of my restaurant, close to three hospitals, a major university and Jean Brebeouf College, we’re well positioned to reach a mainstream clientele.”
As such, he is doing brisk business with a growing and loyal list of clients who are making it a habit to drop by and enjoy some of his freshly baked delicacies.
South, who recently moved back to the city after 20-something years of doing business in Toronto, says he is doing everything to make sure that everyone who walks into his door gets the best tasting patty, not only in Montreal but also across Canada.
Before launching the business, he said it took him about three months perfecting the perfect patty.
“We collaborated with a food manufacturing facility in Toronto and there was a lot of back and forth as we worked on making sure that the product was exactly the way we wanted it be,” he says. “Unlike other patties, I wanted my pastry to be less doughy, more flaky and the meat to be less mushy and more meaty with our trademark spiciness”
Today, South is proud of what he has to offer Montrealers, especially his exclusive jerk chicken patty that has customers coming back time and time again.
Now much of his efforts are aimed at marketing his product and getting it to the next level. He is prepared to franchise the business to other sectors of the city if it grows to expectations.
The Jamaican-born entrepreneur knows a thing or two about growing a business.
He left home in the 1970s and came to Montreal to study and earned a degree in Computer Science at McGill University before completing an MBA.
He entered the corporate world right out of university, serving as a manager with RBC and with Statistics Canada. He then joined L’Oreal Cosmetics as a vice president responsible for their computer systems around the world; he had an office in Paris. He eventually launched an IT company, Southport Data Systems, a provider of business process outsourcing solutions that specialized in large scale imaging and data entry.
He collaborated with some of the world’s biggest corporations, and he grew Southport into a multi-million dollar entity before selling to Calgary-based CriticalControl Solutions Corp for $2.3 million.
Following his successful foray in Canada’s tech industry and a high profile reign as an entrepreneur in the Toronto area South made the move back to Montreal after his wife accepted a vice president position at a pharmaceutical company here.
Once here he decided to follow a life-long passion to take this everyday Jamaican snack and make it into a Montreal staple.
Right now he is working out of an invitingly clean, little resto that can accommodate a handful of clients inside and on the terrace that also carries other Caribbean delights such as rotis, curry goat, jerk chicken and stew chicken plates.
He has no intention to expand the place, he says.
What he wants is to expand the appreciation of patties across the city: “that way, everyone who is making and selling patties will benefit, and patty lovers will have access to a more delightful tasting product.”