Advertise with Us
Home Special Features Saint Maurice of Aganaum 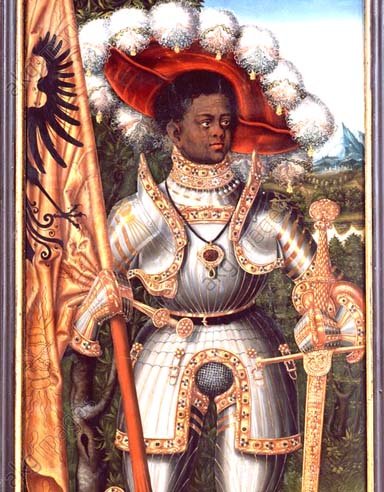 Saint Maurice was a general in the Roman Army of Diocletian and Maximian Herculius who in 287 A.D, were joint emperors of Rome. He commanded a legion consisting of Black soldiers from either Mauritania or Upper Egypt.
During this period, Christianity was beginning its rapid spread throughout the Roman Empire, and this caused considerable consternation in the minds of its rulers.
For example, in the province of Gaul, the slaves, influenced by the teachings of Christianity, revolted against their miserable conditions as well as Rome’s Pagan rule. The Emperors considered it absolutely necessary to put down this uprising and accordingly dispatched St. Maurice and his African legion to carry out this task.
On reaching the site of Aganaum in present day Switzerland, St. Maurice was informed that the people they were sent to crush in Gaul were Christians like himself.
Distressed by this, St. Maurice decided that he could not carry out his mission and informed his men that he would proceed no further. His soldiers agreed that he had made the correct decision and decided to follow his example. Fair, honest and considerate leader that he was, St. Maurice reminded the soldiers of the likely consequences, which included death, but true Christians that they were, they stuck to their decision.
Enraged by the news of this development, Emperor Maximian gathered an army and by forced marches reached Aganaum. In trying to break their faith in Christ, the emperor ordered St. Maurice and his legion to offer a sacrifice to the pagan gods.
The reply of this exemplary Christian and principled human being is so impressive that it deserves to be quoted at some length:
“Sire,” he declared, “we are soldiers, but we are also servitors of Christ, a fact that we proudly confess. To you, we owe military service; to Him, the homage of a pure and innocent life. From you, we receive our pay; from Him, we hold the benefit of life. That is why, sire, we cannot obey you without denying God, the Creator of all things, our Master as well as yours, whether you acknowledge it or not.”
Stung by this reply, Emperor Maximiam ordered decimation, which was the usual punishment for such defiance. Every tenth man was ordered to step out of line. Six hundred came forward and were promised promotions and wealth if they abandoned their leader, St. Maurice. Not a single one accepted Caesar over Christ, and each was put to death.
Contrary to what Maximian thought, this terrifying scene did not convince the Theban soldiers of St. Maurice to abandon their faith in Christ. Like their leader, they stood firm, rejecting the most attractive material inducements, preferring instead, the spiritual gifts such as genuine peace and transcendent happiness, which their religion bestowed on them. The result of such faith was the massacre of the entire Theban legion.
After the emperor called upon the third group to advance and denounce their Christian faith, St. Maurice addressed Maximian:
“We have seen our companions fall under the sword,” he began, “and we have been splattered with their blood. We do not grieve for them. Rather, we envy them the privilege of dying for the One who died on the cross for us.”
Looking the emperor directly in the eye, St. Maurice continued, “Do what you will. No terror or torture can frighten us. We are ready to die. We boldly confess that we are Christians, and that we cannot attack fellow Christians.” Having no answer to such dedication and display of courage of the highest principles, Maximiam ordered the execution of St. Maurice and the remaining soldiers of the African legion. Only a few escaped.
It did not take long for word of the massacre to spread throughout Africa, Asia and Europe. St. Maurice and his band of martyrs, who met death with such equanimity and serenity for their faith, were exactly what Christianity needed at this critical point in its existence for it to really catch on. Which it  did.
The example of these Africans, martyred in Switzerland, served to encourage many pagans to convert to the new religion as well as to help those already converted to hold on to their new faith, in spite of the serious difficulties involved in doing so.
For centuries, St. Maurice was one of the most revered Saints in Christendom. In 962 A.D., King Otto 1 of Germany named him title patron of Magdeburg and its magnificent cathedral. In Europe he is the principal saint of central and southern Germany as well as parts of France, Switzerland, Spain and Italy.
He is on the Coat-Of-Arms of the princely houses of Cracow, Coburg, Lauenberg and Savoy. The Sardinian Order of Saint Maurice is one of Italy’s highest decorations. An Abby dedicated to this African martyr and his Treban legion is located in Saint Maurice-en-Valais in Switzerland. In 2014 this Abby celebrated its 1500th year of existence.