Plans to lead Canada into the future 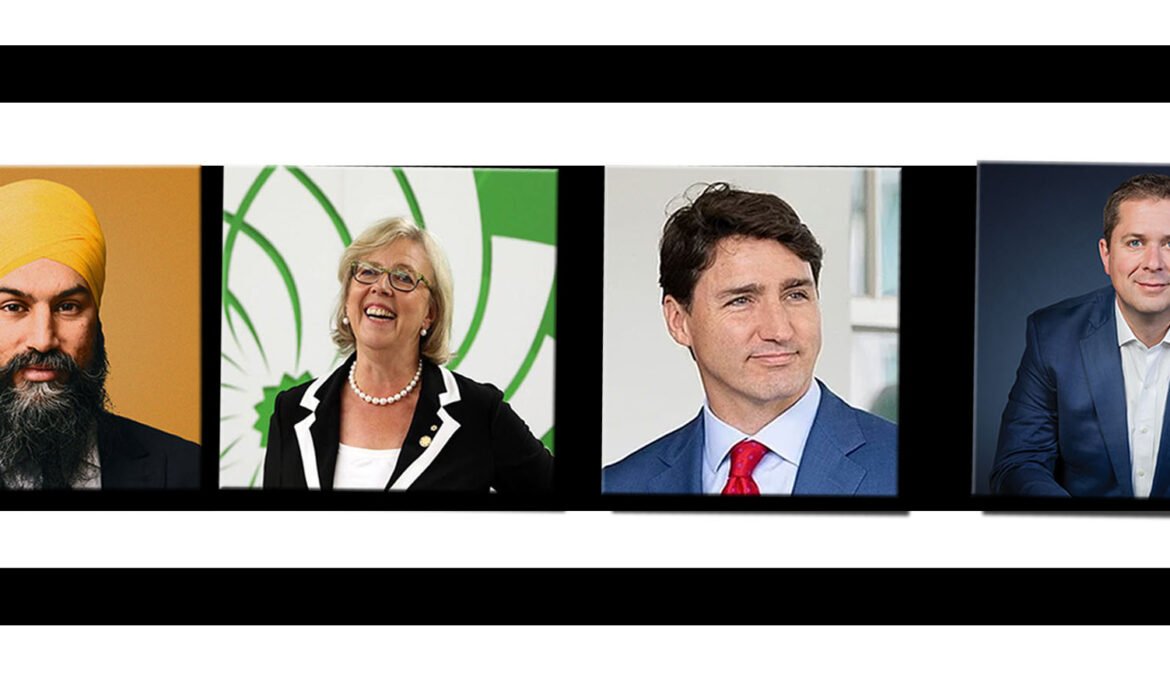 For The people by the NDP

The New Democratic Party, which occupied 39 seats in Parliament before dissolution, got off to a slow start after the election writ was dropped.
From Day One it appeared as if Canadians never really connected with party leader Jagmeet Singh.
However, both leader and party found traction following revelations of Prime Minister Justin Trudeau’s black and brown face fiasco and Singh’s passionate response to the outcry.
The opening it provided allowed Canadians to start lending an ear to the party, which served as the official opposition in Parliament in 2011, when they secured 103 seats.
Sadly the NDP, which for decades served as Canada’s progressive voice, was outflanked on the left in the last election by Justin Trudeau and was forced to cede much of those grounds to the Liberals.
As a result, for the upcoming vote, they are facing an uphill task retaining its traditional support.
The challenge for both Singh and the party is to remind Canadians that the NDP remains the stalwart to stand against big corporations and fight for workers’ rights and champion the policies that are important to lifting the 9.5 percent of Canadians that are still living in poverty.
It’s an uphill battle, but the party has put forward a bold new set of commitments packaged under what they label “A New Deal For Canadians.”
Among the NDP’s most prominent commitment for this election is its plan to create a national pharmacare program that will represent an expansion of the services covered under our national health care system.
The plan calls for dental care, eye care, mental health care and infertility services to all be considered required serves under the Canadian health care program.
On the economic front the NDP promises to create 300,000 good jobs in a first mandate together with “more accessible job training and lifelong learning for all,” as stated in their platform.
For small businesses, which they see as “the engine of job creation in Canada and an important part of every community across the country,” the promise is to continue to fight for “ lower small business taxes, stand against unfair merchant fees, and “make it easier to pass on small businesses to the next generation.”
The NDP also proposes to create 500,000 units of quality, affordable housing in the next 10 years.
And as part of its revenue aspirations, Singh says the party is ready to increase the capital gains tax, roll back the corporate income tax cuts put in place by the Conservatives and create a “super-wealth tax” of one per cent on wealth exceeding $20 million.

Promises of help to families, students and seniors

Trudeau and the liberals show Canadians a path forward

At the midway mark of the October 21st elections, the governing Liberals released a platform that reflected what Prime Minister Justin Trudeau says is the party’s commitment to families, students and the environment.
“We are choosing to invest in people and in their communities, and at the same time stay responsible so that our debt-to-GDP ratio continues to decrease every single year,” says Trudeau speaking to party faithfuls and reporters in Mississauga, Ontario, on Sunday, September 29.
The party’s fully costed platform revealed its commitment to continue the government attempt to bring relief to low income and middle class Canadians.
The promise is to extend a hand to people in these demographic with a series of measure that include: income tax cuts to the tune of $2.9 billion in 2020-21 making the first $15,000 of income tax-free for Canadians earning $147,000 a year or less, projected to lift as many as 40,000 people out of poverty.
Also, an increase in Old Age Security will benefit of 10 per cent for Canadians when they turn 75.
As well as a 15 per cent increase in the Canada Child Benefit for children under the age of one and double the benefits for each child from $2,832 to $5,664.
Students and Canadians who still have outstanding student loans are also in line for the Liberals’ largesse that include giving new parents interest-free break from paying off their loans until their youngest child turns five years old.
As well an extended grace period from six months to two years for payments after graduation, and even after and once students start earning at least $35,000 per year.
And grants to students under the existing program will be increased by $1,200 to as much as $4,200 per year.
The platform also contains new measures to improve working conditions for Canadians, including raising the federal minimum wage to $15, a new Federal Family Day Holiday, and EI sickness benefits will be increased from 15 to 26 weeks.
New entrepreneurs and small business owners are also in line for help with the creation of the Canada
Entrepreneur Account, which offers $50,000 to 2000 Canadians to launch their new businesses.
The platform also contains help for first-time homebuyers; measures to strengthen public health care; and initiatives to deal with climate change.
The Liberal will also extend a hand to new immigrants by promising to eliminate the processing and right of citizenship fees for new applicants.
And will expand its gun control initiatives, banning ‘military style semi automatic rifles’ and giving cities more power to restrict or ban handguns.
Trudeau says that even after introducing revenue measures including a new three per cent tax on “multinational tech giants” and large international corporations, as well as a new 10 per cent tax on luxury cars, boats and personal aircraft.
The plan calls for a deficit of $27.4 billion in 2020-21, and deficits for the following three years.

In the heat of the fracas over Justin Trudeau’s so-called “brown face” and “black face” controversy, Marc Miller who represents Ville Marie-The South West-Nuns Island riding, was particularly “stung” by the allegations that his childhood friend was racist.
“In the years that I’ve known him, and we’ve been in lots of ‘locker-room’ situations, I think I can say that I’ve never heard a racist comment from him, so it was very disturbing to hear those allegations,” says Miller.
The two met at Collège Jean-de-Brébeuf, here in Montreal. They also travelled across Africa together and spent countless hours just chilling, maintaining their long-standing friendship.
Miller, who built a thriving career as a corporate lawyer, says a lot of people in the party were stung by the revelations, as was Trudeau himself, who came to realize the hurt he had unleashed on the multitude of Canadians of color.
“No one wanted to see their prime minster in that situation.”
Miller says in the end, many of the members of the party were able to talk about the issue and continue the conversation of race and diversity in Canada.
As for his friend Justin: “My hope is that Canadians will forgive him. And I know that when you have a solid track record he does, it’s easier for people to look beyond your missteps.”
• As for the Liberal’s track record on the diversity, Miller pointed to their commitment as laid out in their anti-racism strategy include the double of the investment the current initiative as well as strengthen the Anti-Racism Strategy and double its funding.
The strategy also promises to:

Elizabeth May leader of the Green Party Of Canada in her pitch to Canadians for the upcoming elections is challenging voters to do what is right for the environment at this point in time.
One of the most important things you can do is vote for the kind of unwavering leadership that the climate emergency requires. Now is the time to elect a parliament that is not going to back down, compromise or waffle. We are offering you the slate of candidates and the platform that will get us where we need to go.
By electing a strong caucus of Green members of parliament, you will give Canada the best possible chance to rise to the challenge. And I firmly believe that once we have shaken off the dead hand of the fossil fuel lobby,
we can play an effective role in pushing global action.
This is not a one-issue platform. It sets out a deep commitment and action plan to genuine truth, justice and reconciliation with Indigenous Peoples.
The Greens have been on an upward trajectory across much of Canada, especially in Atlantic Canada, for much of the past several months as a growing number of Canadians look to alternatives to the Liberals and the NDP to champion climate change issues. The Conservatives have basically ruled themselves out of that debate.
They currently hold two seats in Parliament and May is calling on voters to do the responsible thing by strengthening the contingent of climate defenders in Ottawa.
And in positioning the party to play a bigger role in the future, the Greens have unveiled a platform that put solid strategies for a green economy, transportation, agriculture, energy and of course climate change.

Scheer and the Conservatives Promises

Since taking the reigns of the Conservative Party of Canada on May 27, 2017, Andrew Scheer has had his share of problems connecting with Canadians.
However, with Prime Minister Justin Trudeau’s series of blunders adding a haze to what might have been a sunshine walk to victory for the Liberals, some have been forced to cast their eyes on Scheer who represents the riding of Regina–Qu’Appelle in Saskatchewan.
And although the Conservatives has been running neck and neck with the Liberals for much of the campaign, Scheer remains a distant second choice for prime minister for most Canadians.
Still, compared heavily to former PM Stephen Harper and burdened by his association with Ontario’s Premier Doug Ford, the man who wants to be prime minister is finding it difficult to earn the trust of a majority of voters.
Over the past several weeks Scheer has been fronting a platform of promises, which the Conservatives are hoping will wrestle votes away from the Trudeau Liberals.
Among them are:
• Scrap the Trudeau Carbon Tax, lowering the cost of everyday essentials like gas, groceries and home heating.
• Introduce the Universal Tax Cut, saving a couple earning average salaries $850.
• Take the GST off home heating costs, saving your family $107 every year.
• Introduce the Green Public Transit Tax Credit, saving a family of four who take transit up to $1,000.
• Make maternity benefits tax-free, putting up to $4,000 back in the pockets of new parents.
• Introduce the Children’s Fitness Tax Credit, allowing parents to claim up to $1,000 for sports activities.
• Introduce the Children’s Arts and Learning Tax Credit, letting parents claim up to $500 for arts and learning programs.
• Expand the Age Credit, benefiting the lowest income Canadians the most and giving a senior couple up to $300.
• Boost government-matching to RESPs by 50 per cent, helping parents get more for their kids education.
• Introduce the Green Home Renovation Tax Credit, putting up to $3,800 back in the pockets of Canadians for green home improvements.
And for small businesses the promises are to:
• Repeal Trudeau’s tax increases on small business investments
• Exempt spouses from Trudeau’s tax increases on small business dividends and
• Make it easier to navigate Canada’s tax system and the Canada Revenue Agency.