Montrealers march and kneel against racism 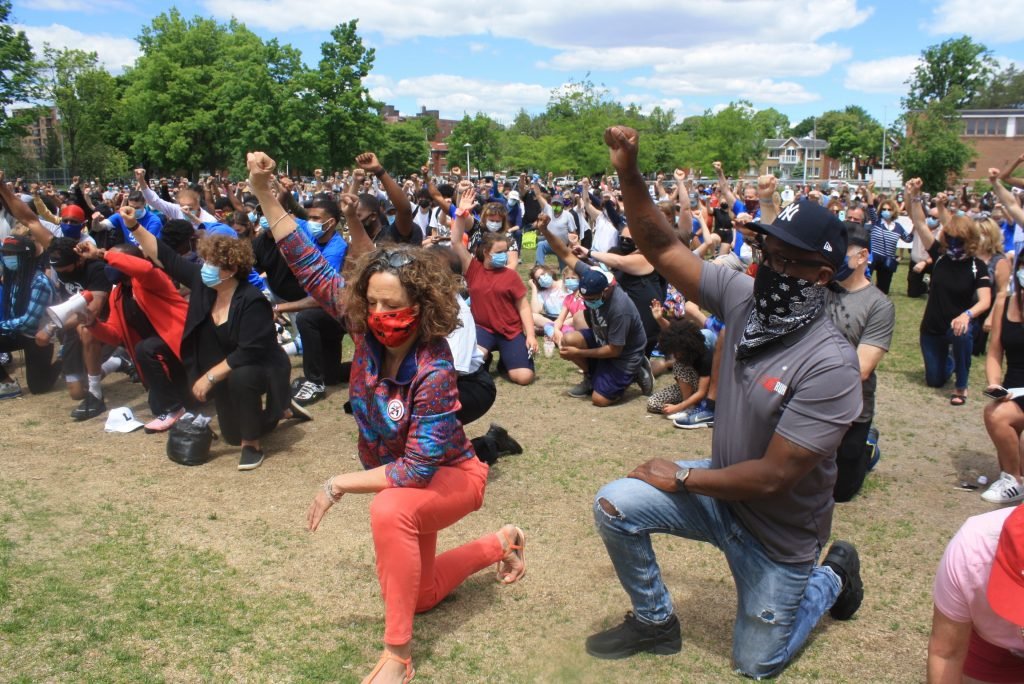 On Sunday, June 7, Montrealers again came out in a show of force against systemic racism and police brutality against Blacks.
In the east, thousands congregated at Place Émilie-Gamelin to hear from activists and community leaders before marching along Rene Levesque to Dorchester Square in the middle of downtown Montreal.
Also in the crowd was Dominique Anglade, newly appointed leader of the Quebec Liberal Party, the first Black person to head a political party in the province.
She used the opportunity to take Quebec Premier Francois Legault to task on his contention that there’s no systemic racism in Quebec.
In NDG, more than a thousands answered the call from Montreal Community Cares Foundation to an early afternoon event tagged Mtl. Kneels For Change, which took place at Loyola Park.
In attendance were several municipal politicians including the mayor of Cote des Neiges-NDG, Sue Montgomery, the mayor of St.-Laurent Allan DeSousa as well as city councilors Mary Deros, Christian Arseneault and Peter McQueen.
Former NDG Member of Parliament and current Trustee of the English Montreal School Board, Marlene Jennings was also present.
A wide-cross section of children and youth from across the cultural divide were also on hand to add their knees to the cause.

Corona be damned.
On Sunday May 31, Montrealers took to the streets to protest against extra-judicial killings and police brutality both in Canada and the United States.
The protest was sparked by the viral video of the killing of George Floyd a Minneapolis native, by a white police officer who knelt on Floyd’s neck until he died.
“Racism is a Quebec Problem Too,” “Black Lives Matter” “We Remember You Nick,” and other slogans were written across signs from the thousands who started gathering around 4:30 p.m. at the corner of Maisonneuve Blvd. and St. Urbain St.
The event was publicized on Facebook where they stated the goal was to draw attention to Floyd’s death, as well as the deaths of others across the United States and Canada.
“It’s important for everyone to be here today so that we can have a lot of voices to say the George Floyd event is not a singular event,” Marie-Livia Beauge, one of the Montreal organizers is quoted as saying. “It keeps happening and it’s happening here in Montreal so to be here together is to show solidarity and denounce the injustice.”
Montreal police were out in large numbers to watch the crowds, and organizers attempted to keep people physically distant from each other without much success. The vast majority of protesters came with masks.
Similar rallies took place around the United States, London, Copenhagen and Berlin over the weekend as well. In Canada, Torontonians took to the streets on Saturday May 30, to protest the recent death of Régis Korchinski-Paquet, who allegedly fell from the balcony of a 24th-floor apartment in the presence of police.
In a series of posts on Twitter on Sunday, Montreal Mayor Plante condemned “violence, racism and systemic discrimination.”
“No matter the status, origin or skin color, everyone has the right to expect fair and equitable treatment and I will not make any compromises in this regard in Montreal. The City is engaged in a major project to combat racial and social profiling,” she wrote.
The protestors walked as they chanted “Black lives matter” and “I can’t breathe” — what Floyd was caught on video saying moments before his death. They took a knee in unison several times in solidarity with the movement.
Montreal has also had its share of racial injustices and police brutality. So protestors remembered men such as, Freddy Villanueva, shot in a park in Montreal North, Nicholas Gibbs, 23, who was shot on August 21, 2018 and Pierre Corolian, 58, who was shot by Montreal police officers in the hallway of his building among others.
Nick Munene, a Kenyan Liberal Arts student at McGill was among those who took to the streets for the massive Montreal protest.
“I was shocked to see a man lose his life in such a senseless way. It was unbelievable and disgusting,” he says to the CONTACT via phone interview.
“I have limited resources as a student, but I still made a donation and I was happy when I found out that there would be a protest. I wanted to go out there and be among the number.”
He explains that although the racism isn’t as overt in Canada, it’s still present: “Here we have many micro aggressions, it’s almost like several mosquito bites, you ignore one and then you feel another and another. And in the end, it still hurts.”
The rally was peaceful but, in the end, tensions flared when it concluded and some demonstrators took to looting.
“I was shocked to see that on Monday morning, because when I left it was peaceful and there didn’t seem to be any hint that violence would break out,” Nick says.
After the rally had formally ended some demonstrators made their way back to the starting point and begun looting and heckling.
Among those targeted was a fast-food restaurant, an adult entertainment shop and the famous Steve’s Music Store on Ste-Catherine St., where looters smashed windows and stole guitars and other valuable equipment.
“It’s clearly not good for business, says a manager of Steve’s Music, a Montreal institution. But don’t get him wrong, he says: it was all worth it.
“Without any questions whatsoever, it’s a noble demonstration and it’s clearly far overdue,” Lenny Lanteigne is quoted as saying.
It was “unfortunate that a few hooligans turned it into a free-for-all,” he says.
“It is awful. But next to what some people are going through, this is nothing.”
The store’s insurance company is currently reviewing the damage, and Lanteigne isn’t sure yet how it’ll all turn out financially, he said.
The protestors smashed windows set fires and played cat and mouse with the police who were trying to quell the protests.
Although he was disappointed by the unfortunate turn of events, Munene says he would go out again. “I am afraid that tensions can rise and I could get hurt but I think it’s important to be seen and to take a stand so I would do it again in spite of the risk. This is bigger than just me.”