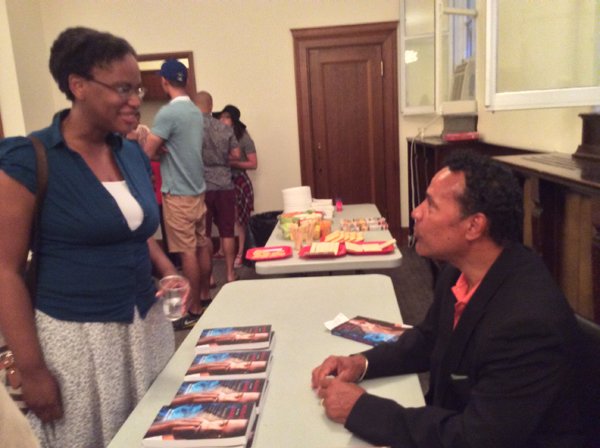 Anthony Sherwood is well known by Montreal’s Black community as a documentary film maker, actor and playwright as well as being a part of the musical Sherwood family.
Montreal would like to claim Anthony as our own, and although he has lived in many cities—Halifax, Winnipeg and now Brampton for many years—he was probably most influenced by his years growing up in Montreal. Now he’s branching out as a novelist, Montreal and none other than Little Burgundy in the early and mid 20th century as the setting.
The launch of the novel, Music in the Dark, took place on Friday, July 3rd at the Atwater Library and was well received based on the overwhelming support and reaction of book lovers, admirers, family and friends. The novel is a fictional account of the experience of a young Black musician, his crutch, alcohol, and his salvation, love.
LC is a young gifted musical talent who attempts to survive to express his special blessing as a pianist. As a riveting and engaging love story that intertwines suspense, racial injustice, mob justice and family secrets, Music in the Dark is a page-turner that is well worth the read. It’s a short novel that uses historical reality to frame a creative and compelling plot.
The references to historical realities are ingeniously woven into the fabric of the story—the essence of Little Burgundy in the 30s, 40s and 50s had to include the Union United Church, Colored Women’s Club and Rockhead’s Paradise. The tension of his personal and social challenges stay with the reader to the end of this well crafted love story.
Montrealers can buy the book at the Indigo bookstore downtown at Ste. Catherine Street and McGill College. If you live on the West Island it can be purchased at Chapters bookstore in Pointe Claire (next to Fairview Mall). You can also purchase the book online at www.nimbus.ca. Publisher: Pottersfield Press web: www.pottersfieldpress.com Distributor: Nimbus Publishing web: www.nimbus.ca. Or call 1-800-NIMBUS-9.