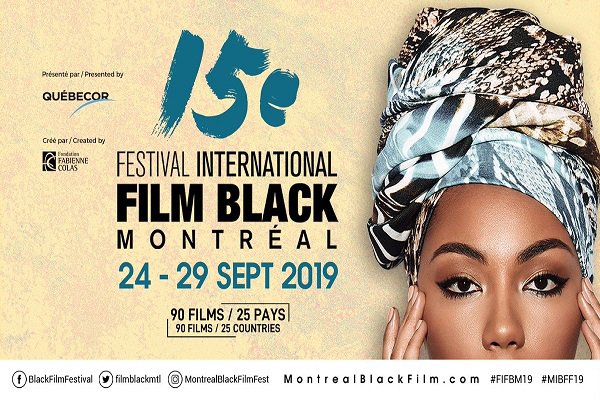 The Montreal International Black Film Festival (MIBFF) is coming to Montreal for the 15th year in a row. The festival is Canada’s largest film event that’s purely dedicated to Black cinema, it also boasts as the only bilingual Black film festival in North America (French and English.) The festival aims at shining a spotlight on diversity in Black cinema.

This year, the festival will run from, September 24, until the 29th it will feature over 90 films showing at six venues around Montreal Kicking off the event will be the screening of the film, Harriet, a biographical film about slave-turned-abolitionist Harriet Tubman.

This season organizers have a great line up  of films and events such as, Being Black in Canada, where 15 filmmakers between ages of 18-30 (from Montreal, Toronto and Halifax) will screen their documentaries this initiative was developed by the Fabienne Colas Foundation’s Youth and Diversity program.

The festival aspires to shine the spotlight on diversity in Black cinema. This season organizers have a great line up of televisual feasts such as, Being Black in Canada where 15 filmmakers between ages of 18-30 (from Montreal, Toronto and Halifax) will screen their documentaries developed through the Fabienne Colas Foundation’s Youth and Diversity program and engage audiences in a discussion about their journey.

Another treat lined up is an intimate evening with two of the Central Park Five (now exonerated 5), Yusuf Salem and Kevin Richardson whose stories were told in the Emmy nominated documentary, “When They See Us.” They will be receiving the festival’s Social Impact award.

Also showing this year is From Haïti to Hollywood with Jimmy Jean-Louis and an Intimate Evening with Isaach de Bankolé a discussion with the actor known for his roles in James Bond, Black Panther, The Sopranos, 24, Shaft.  Closing out the ceremony this year will be  Ellen, The Ellen Pakkies Story screening by director Daryne Joshua, whose debut film Call Me Thief was selected as the South African entry for the Best Foreign Language Film at the 89th Academy Awards.

For the full schedule of events, tickets and passes, visit: www.montrealblackfilm.com   514-882-3334