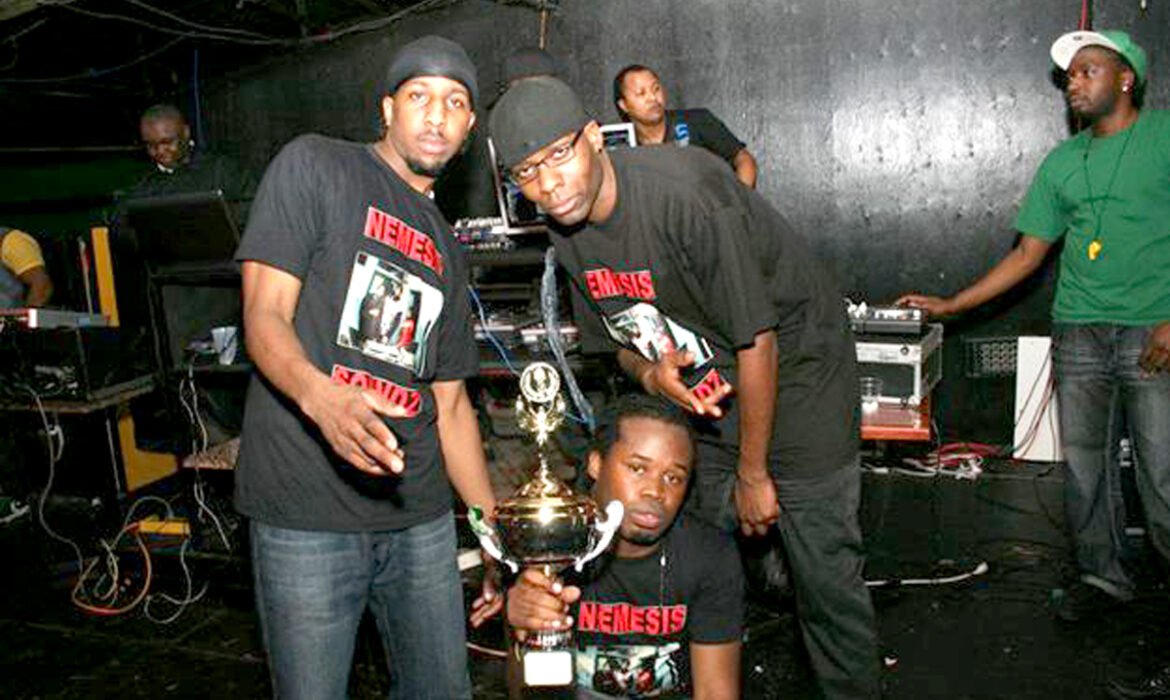 They call themselves “The archenemy of every sound engineer”

Nemesis Soundz has been a sound coming out of Montreal for over a decade. Starting in early 2003, Nemesis was motivated to create a name for themselves, a fresh, versatile approach to new music.
Originally comprised of Atian Williams, Matthew Harris and Abasi Thomas, better known as DJ Kid, Byrd, and Nightfire, Nemesis Soundz showed a passion for music at an early age. In their mid-teens, the boys were cons

umed by the idea of being able to manipulate music in such a way that it reaches people, ultimately unifying people of different races, religions and cultures through their sound.
It was Abasi who first recognized that there was a greater calling for himself and his colleagues, stemming from his passion for computer programming and technological advances. He was determined to take music to a higher level.
In the early part of the millennium, Abasi joined forces with Matthew and Atian in order for them to achieve their dreams. They began playing their music within their community, in the borough of Cote-Des-Neiges, where they spent their early teens.
The boys began networking and promoting themselves at the time, through word of mouth, promotional CDs, and always stepping into the limelight. The dynamics of the trio consisted of Atian, always announcing the presence of their group, capturing the attention of partygoers with a great level of his loud, contagious energy.
Abasi loves to entertain a crowd with a diligent technique of mixing and emphasis on music of one genre or another. Byrd demonstrates the ability to analyze a group in such a way to recognize the energy provided by the partygoers and is able to return that same energy through his mixing.
In recent years, the trio has expanded their group to include Kenny Andrew as well, better known as DJ Big Worm. Kenny contributes to the group in a fresh way, adding his own abilities to the dynamics of the group.
Kenny shares the same interests as the rest of Nemesis, as they wish only to keep doing what they love: playing music that speaks to all the members of the Montreal community. With his immense energy, living up to the legacy of Nemesis thus far, Kenny enhances the powerful environment with his own passion for music and people.
Over the years, through their involvement with the Cote des Neighs community, the gentlemen have given back to their borough in tremendous ways. With their ability to network and infiltrate local venues, Nemesis Soundz is growing at a steady pace. They expanded their music abilities and are on a quest to represent at as many possible venues in the Greater Montreal area.
With the need for a larger footprint in the music industry, Nemesis Soundz continues to grow and look for ways to give back to the community. Though versatile in the music they provide the community, the group has a passion for dancehall, soca and reggae. This was made apparent when they decided to host their own truck at Montreal’s annual Carifiesta Parade; they attracted over 250 participants eager to celebrate Caribbean music with Nemesis Soundz, representing in their custom-made t-shirts.
The Delinquent T-Shirt Band was a first-ever experience for Nemesis Soundz. They had a great turnout of people willing to share in the experience and represent a local band.
“We the present and the future” is the group’s motto. This encapsulates the true vision for the group. Nemesis Soundz plans to remain an entity within the Montreal music community and have big dreams of being the most recognized sound coming out of Montreal. With the devotion and motivation they have demonstrated within the past decade, it will be grand to see the achievements of the group.
Jade Parkinson-Gayle is majoring in English Literature at Concordia University.