Advertise with Us
Home News Community News Meet Mr. Pöng: The man and his steelpan

Meet Mr. Pöng: The man and his steelpan 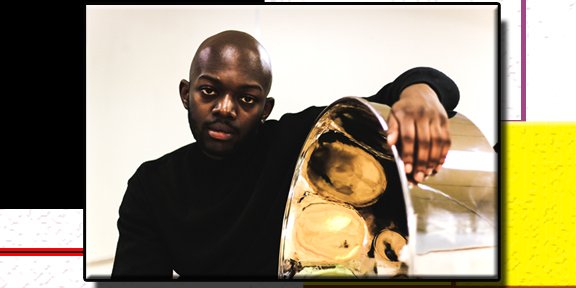 On March 30, he  releases “Echoes Between a Rock and Hard Place” on soundcloud

Two years ago, I came across a unique artist whom I’ve since seen showcasing his talents all over the city.
Born in Chibougamau and raised in Montreal, his name is Ukpöng Etang also known as Mr. Pong. I’m sure many of you have crossed paths with the young steel pan player at a show, wedding or even in the metro.
Despite the big Trini flag on his pan case, he’s actually of Jamaican and Nigerian decent. And what makes Mr. Pöng stand out is his ability to take this traditional Caribbean instrument and replay music of any genre or era with a modern twist.
Recently, I caught up with Mr. Pong performing at my nephew Malakai’s first birthday and thought to myself this guy does it all. In addition to playing interactive games with the pan, he gave us a brief history and demonstration of how it’s played.
He got his introduction at age nine while attending Coronation elementary school in Cote-des-Neiges, Pan aficionado Salah Wilson was his music teacher.
After two years of training he joined the famous Salah Steel Pan Academy and began performing for audiences. I first saw Mr. Pöng at Judy Lamaze’s night of elegance where he definitely won over a crowd that grew up with traditional steel pan. They accepted and enjoyed his renditions of modern radio hits.
Since then I’ve caught him performing at various events and shows for people of all ages who may not have been aware or interested in the pan until they saw him play.
A few years ago the young musician found himself in a dire situation. He says “I’ll save the details of that situation for my book.”
Strapped for cash he took his talents underground – ªto the metro.” From the outside it may look like people just show up and play music and collect money.
However, there is a lot more to it than that.
Mr. Pöng explained, “We work by an honour system based on who gets their first.”
They work in two hour slots, and in case you’re wondering they can make anywhere from $50 to $100. He says every station has a different vibe, different demographics…
When asked if he had a favourite one to perform in. Guy metro hands down is the most coveted place for musicians to showcase their craft.

With a degree in Marketing from Concordia’s John Molson School of business, Mr. Pöng uses techniques learned in class and apply them to his music career.
With several live performances under his belt, he’s decided the next step is to record a compilation for the masses to listen to and keep.
So on March 30, he will be releasing a project on sound cloud consisting of ten cover songs. The title is “Echoes Between a Rock and Hard Place” inspired by those difficult days he’s reserved for his book.
Every aspiring artist will experience highs and lows, not getting paid, cancelled shows and so on.
Mr. Pöng remains focused on sharing his love of the steel pan and creating intrigue. Next stop following this release will be distributing physical copies of his work.
You can find and follow him on various social media.
His name is Mr. Pöng.