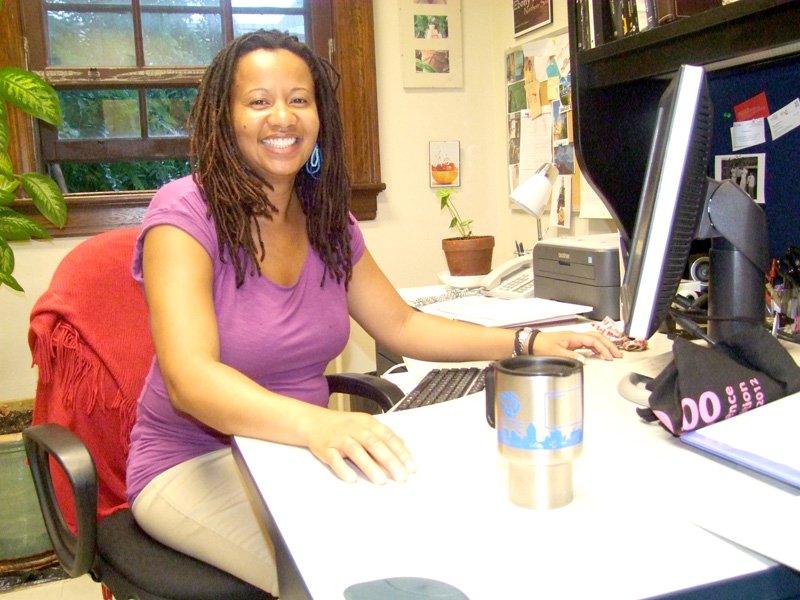 Search every university campus across Canada and you’ll find just one Black art historian. She is Dr. Charmaine Nelson, in the department of Art History and Communication Studies at McGill University, where she has been since 2004.
To this community-minded professor, being “the only one” is not a source of pride but a troubling reminder of how much there’s still to be done to get students of African descent consider this area of study and for Canadian universities to offer positions to qualified Blacks.
“The issue of hiring persons of color goes beyond departments of Art History and (permeates) almost every other faculty in universities across Canada,” she told The Contact at a recent sit-down at her office on campus at McGill.
“When I search around this campus, I can’t find ten Blacks among the five thousand professors at this university… yes, there are about five thousand professors at McGill and probably not ten persons of African descent.”
She recently allowed herself to be optimistic, when McGill went looking for a professor for African History. Surely, she thought, this was an opportunity for them to hire a qualified person of color. But, alas, she found that it wasn’t to be when the university came up with another white man to join the ranks of thousands already on staff.
“The issue of diversity at that level can still be dealt with by the university, if there’s the will among those in positions of power.”
Remarkably, for the former Whitby, Ontario resident, it was relatively easy attaining the disconcerting distinction of being Canada’s only Black professor of Art History.
In fact, after she entered Concordia University and found that there was actually a field of study that answered to her lifelong passion for art, research and writing, she blazed a trail of excellence that lead to undergraduate and graduate degrees, and eventually a PhD from the University of Manchester in England in Art History.
Art History, Dr. Nelson explained to the slightly perplexed journalist, looks at the   history of art, architecture and visual culture covering various periods in history.

“For example,” she said patiently, “There are those who study the American Civil War; we look at how it and its environment and how they were documented, painted and photographed.”
“However, much of my interest centered around feminism and blackness.”
She says initially the lack of Black research material especially in Canada was daunting, but her fascination with Art History became entrenched once she discovered the area of study that covered “race and representation.”
With the bulk of material in the US and England, she ended up in Manchester, where she found a three-year PhD program that answered her personal pre-requisites.
Today, 13 years after climbing to the pinnacle of the academic ladder, Dr. Nelson has taught extensively on post-colonial and Black feminist scholarship and stands as an authority in the fields of the Visual Culture of Slavery, Race and Representation and Black Canadian Studies.
She has, among her arsenal of information, four books published over the past ten years, including a highly-regarded academic discourse of the state of relations in Canada, one she co-wrote with her sister Camille in 2004: Racism Eh?: A Critical Inter-Disciplinary Anthology of Race and Racism in Canada.
In 2007, her thesis was published by the University of Minnesota Press. The Color of Stone: Sculpting the Black Female Subject in Nineteenth-Century America is a must-read, even for those with passing interest in how Blacks were portrayed during the period of the American civil war.
Her passion and wide-ranging knowledge bring alive what appears to be an obscure field of study.
Even her dad, Max Nelson, a former high school principal turned financial advisor in Toronto, was surprised at her chosen area of interest.
But his wife, Barbara, had to remind him that all little Charmaine did throughout elementary and high school years was make and paint stuff that she brought to hang on the refrigerator.
Max and Barbara moved to Toronto from their native Jamaica where he, with the help of his wife, attained multiple university degrees before he started teaching. He eventually switched careers, completing an MBA in his forties.
Charmaine and her two other sisters, Camille and Charlyn grew up in a household where their parents were always engrossed in schoolwork. Their expectations for their three daughters were clear-cut.
“There was only one question when it came to us attending university…which one,” Nelson said.
Charlyn attended the University of Western Ontario and Camille attended the University of Toronto and the University of Ottawa and is now a dean at a Law School in Boston.
Before accepting the position at McGill, Nelson lectured for a year at Western University in London, Ontario.
Since moving to Montreal, she has compiled an impressive track-record of accomplishments in her field, including appointments as a Fulbright Visiting Research Chair in 2010 and a Visiting professorship at the University of Wisconsin in 2011 and was an honoree at McGill University celebration of research excellence last year.
Accomplishments and contributions aside, as Nelson enters her second decade of teaching, she still finds her gender and race creeping into her relationship with some of her students.
It’s not unusual for one or two of them to show disrespect by questioning my teaching methods, subject, or by the manner in which they address me.
To get past that, Nelson usually sits down every new crop of students to confirm that she is indeed a Black woman, an eminently qualified one who expects to be regarded as such.
If in this still racist society, there were to be only one Black art historian on all the university campuses across Canada, it should be Dr. Charmaine Nelson.