Intercultural Choir back in a great performance 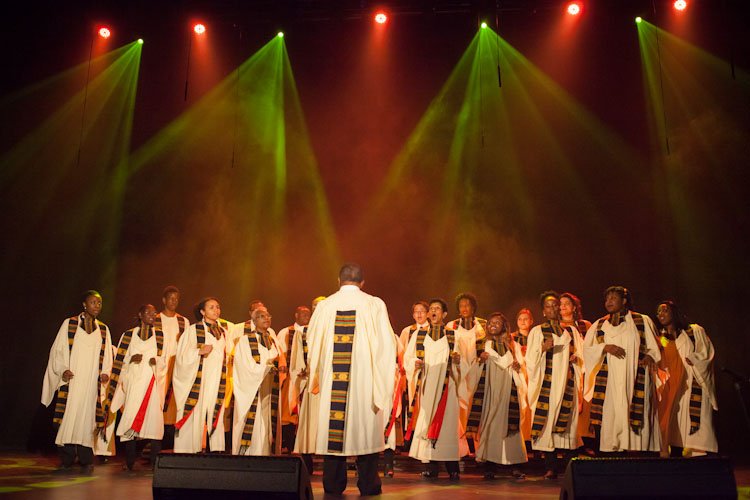 On October 26, The Montreal Intercultural Choir gave a concert at St. Paul’s Anglican Church in Cote-des-Neiges. It was a benefit concert, a “thank you” to the rector and church members for the privilege of rehearsing on the premises. The lively and enthusiastic choir captivated the audience with their magnificent performance, which they sang a cappella with the occasional drum. The exception was the final item, the Hallelujah Chorus, when the choir was accompanied on the organ by Christopher Grocholski. Some members in the audience remarked that the performance caused them to experience “goose bumps”.
The Montreal Intercultural Choir was founded more than 30 years ago by Dr. Leonard Wosu, a native of Nigeria who is a scientist and music lover. The early members were employees of the Montreal General Hospital where rehearsals were held. Directing choirs was not new to Dr. Wosu.  At the age of 16, he had directed a 110-member Adventist high school/teacher and evangelistic training college church choir in Nigeria, and at the age of 10, he had formed a viable male voice quartet. The repertoire of the present choir is broad, consisting of Christmas, Gospel and classical music, hymns and African songs, including the beloved “Nkosi Sikeleli Africa”.
Over the years, membership has undergone many changes brought about by moving, illness and death. However, under the leadership of its tenacious director, the choir has survived, and continues to give wonderful performances. The concert at St. Paul’s demonstrated this tenacity and love of music and Dr. Wosu’s ability to direct a choir as well as to attract some of the best voices in Montreal. He is looking for new members and invites interested persons to join, and to attend the concert which will be held at St. Albert’s Church, 2715 Cote St. Catherine Road, on December 6, at 7:00 p.m. Call 514-345-8041 for further information.