Advertise with Us
Home Opinions I Wish You A Merry, Merry Christmas…

I Wish You A Merry, Merry Christmas… 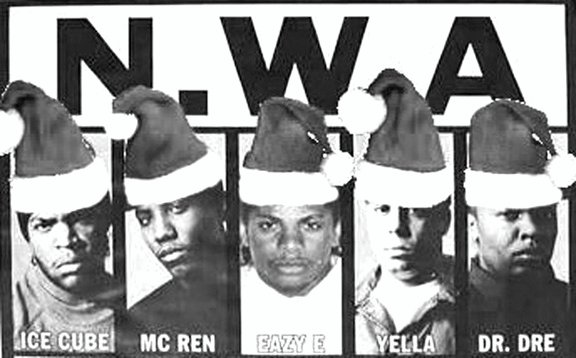 Over the years, several Rap groups have come and gone, some even making their mark before disbanding. Notable among them was one out of Los Angeles (South Central LA), called NWA.
The group came to prominence on the other side of the mid-1980s with a bang, only to disband a few years later when members went their separate ways to pursue various individual interests. But as a group they left legacy of conscious music, in my opinion – raw, unfiltered, urgent music that spoke to deep-rooted social issues and conditions of the day (including prejudice, racism, the paucity of opportunities for people in the so-called “Inner cities”, police brutality: harassment and recurring shootings – often fatal – especially of Black males) that were… are impacting Black people.
It is out of that perennial [disfavoured urban American] context and condition that one of NWA’s former front men, Eazy-E, recorded a song, ‘Merry … X-Mas’ in 1992, borrowing the melody of one of the most popular Christmas songs ever recorded, ‘We Wish You A Merry Christmas…’ It’s one of those songs that cannot and will never be duplicated, but there are also Reggae and Soca/Calypso versions of it.
I like the Eazy-E “Merry … merry” version; it’s a novelty song that’s laced – or better stated spiced, seasoned – with copious amounts of ‘hard words’ that speak to the environment and conditions that lent to its creation. If you have sensitive ears you might not like it. Let’s just say it’s a version of ‘We Wish You…’ turned inside out, which is in keeping with the sentiments of that Urban demographic.
So while cleaning my bathroom the other day, Christmas songs were playing on the radio/TV to get people in the spirit… and when that traditional “We wish you…” came on l couldn’t help thinking of the NWA version. It was as if one of those earworm songs was lodged in my mind. And I began to (wishfully) think what if someone were bold enough to have the Christmas balls to play the Eazy-E version. I have a high tolerance level for contextual ‘hard’ words…
Visualizing the social conditions from Eazy-E’s perspective (which gave rise to the creative content and palpable tone of his version of that song), one can look back over the decades since its release and see that the “happy new year” part of it is a mere pipe dream for those who can identify with his musical sentiment… I do.
As the saying goes, “I’m feeling him.”
Truth is, with the Christmas [holiday] season looming, depending on which side of the fence you occupy –demographically, socially, politically, nationally or internationally – there hasn’t been much to celebrate this year. Even back in 1992 there wasn’t much to celebrate; time may change, but some things simply remain the same.
Just look around the world at tens of millions of people – including millions of children – their various circumstances and states of existence. For the most part they are literally man-made – by nefarious forces whose actions continue to do more to foster discontent, not to mention pain and suffering… rather than improving the human condition for all that’s worth.
So to the architects of the stark global condition here’s to you, courtesy of Eazy-E: ‘Merry … X-Mas” and the rest…
Unfortunately, Eazy-E contracted and died of a socio-social disease, AIDS, in 1995. But if he were still alive, he would see how his New Year’s sentiment (for 1996) is playing out, or played out. Not because he is, or was, a scrooge, or man of ill-will who would want any New Year to be as he lyricized, but because of myriad powerful national and international forces that (would) like the state-of-affairs of the world to remain just the way they are: a world seemingly replete with more madness – as 2017 was – than goodness…
And so, a traditional “[…] Merry, merry, merry Christmas and Happy New Year.”
Here’s hoping we’ll connect again next year: 2018.