How it came to this… 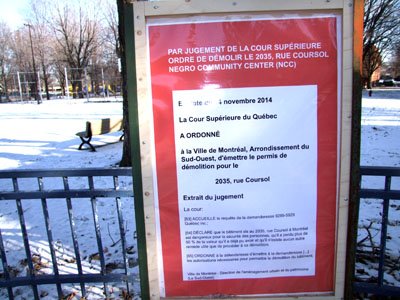 For decades the Black community blazed a glorious trail

When it comes to community issues, apathy runs rampant among us.
And it smacked us in our faces this month as we watched helplessly as two buildings that carried our name and some blood and sweat from past generations of Blacks were taken out of our hands for good.
The sale of the buildings that housed the Black Studies Centre at 1968 De Maisonneuve in downtown Montreal and the Negro Community Centre at 2035 Coursol Street came to a measure of closure this month and with it a stamp of
of how disconnected and dysfunctional we are as a community.
Properly maintained and functional, both buildings would have fetched at least a million dollars each, but in the hands of those who saw themselves more as owners than stewards, they were allowed to deteriorate into a state of dilapidation.
The BSC was sold for $699,000 about $100,000 less than its asking price, and the NCC, thrown into bankruptcy, went in a fire sale for about $300,000.
Over the past couple months, the drama that accompanied the decisions to sell these buildings played itself out in a public display of our dies-functionality as a group.
Those in charge of the Black Studies Centre decided that the community could not handle the responsibility of ownership and chose to off-load the building, which was acquired in our name and with invested and selfless efforts of many Black and Caribbean individuals.
At the NCC, a potent mixture of self-hate, ineptness and bad-mindedness drove a handful of individuals to bankrupt the heritage organization and give away the building that was its home for almost 70 years.
Understandably, the going must have been tough over the years for those who assumed the responsibility of mismanaging these organizations on behalf of an unforgiving and oft-times helpless commun

ity.
But sadly, what they will be remembered for is their refusal to give the community a chance to redeem its ownership and their recklessness in dismantling the foundation, shaky as it was, upon which something could have been built.
It wasn’t supposed to be like that. And it brings to the fore all that ails us.
At nine percent of Montreal’s population, Blacks constitute the largest visible minority group in the city, but sits at the bottom of the heap when it comes to community-owned assets. And as such is the least able to help itself, especially in areas such as education, training and employment, where other cultural groups have made massive strides.
It wasn’t always like that!
One hundred years ago, in 1914, seven years after the Union Church was established, the spiritual leaders of the day, already had $2000 tucked away in a building fund.
Their vision was to erect a structure that would reflect their pride as one of the first Black congregations in Quebec, if not Canada, and of course, to better accommodate what they saw as an emerging community.
Not long after, on February 22, 1928, two years after he became pastor at Union United Church, Reverend Charles H. Este founded the Negro Community Centre as an outreach institution to cushion the burgeoning social and economic needs of the community.
Initially based in the church, the NCC quickly spread its wings and found a base residence at the space that was recently sold as rubble.
But the NCC also spawned other community groups and a drive to acquire more assets, such as The Black Community Council of Quebec and its headquarters on Old Orchard Street in NDG. Along the way, the Black Studies Centre was also acquired in the name of the community as a repository of the contributions, achievements and history of Blacks here and afar.
At that rate it’s fair to say that Blacks had positioned themselves well as a viable community in Montreal, Canada’s second largest city, and one of the world’s most thriving metropolis.
The buildings in our possession were working for us.
In the southwest, the NCC, in its heyday, was delivering a range of services to the still sizeable community in the St. Henri/Little Burgundy area and beyond, including   a solid communication network that produced a monthly television show and a highly rated newspaper.
When it came into its own, the BCCQ building was also home to a range of educational and training programs for youth from across Montreal, and housed institutions such as the NDG Black Community Association and the West Indian Carnival Day Association, then organizers of the annual summer parade.
The Black Studies Centre building also nurtured emerging organizations, including the BCCQ as well as the Black Theatre Workshop, and was also a venue for conferences and workshops.
So what happened?
Well, it’s more like what didn’t happen. As a community we never fully grasped the concept of “do-for-self.”
The decades of the 70s, 80s, and 90s saw a massive influx of Blacks into Quebec. And as our community grew, so did the mass of young Blacks hobbled by deficiencies in education and training, and stricken by unemployment and underemployment.
Much of the community’s issues were because of the racism that lived in the underbelly of this society.
Rather than exploring the systemic changes needed to remove some of the obstructions of race, governments instead decided on injecting small amounts of money to selected frontline organizations supposedly for supplementary education and training.
It wasn’t long before these government grants (guilt money as determined by some) took hold in our community, creating a voracious appetite for more and a culture of dependency among those who had access to them.
Sadly, whatever benefits came with the “grant money” were offset by the strife and distrust strewn among those who got, those who didn’t get, and those who wanted more.
So instead of taking it to the next level by focusing on education, training and entrepreneurship, organizations such as the NCC, BCCQ and Black Studies Centre remained caught-up trying to deliver programs.
Instead of seeking self-sufficiency by exploring partnerships in the private sector, they kept trying to pay mortgage and taxes on properties with grant money. So when the money started to dry up, desperation set in. The BCCQ building was the first to go.
By the early 1990s, the influence of the umbrella organization started to wane as the grants became more difficult to secure.
As a tenant, NDGBCA kept the building viable. But when funding agency Centraide pulled the plug on them, NDGBCA was forced to move and it all started to come apart for the BCCQ. That building was eventually sold.
What followed was a continuing degrading of the community. Flagship organizations such as NCC, Montreal Association of Black Business Persons and Professionals and the Black Studies Centre became increasingly less relevant and eventually shut their doors.
Today, the challenge for surviving organizations is to find leadership capable of understanding Quebec’s new social and political terrain and lead the community from where we are to where we haven’t been before.
Wonder if we are up to that challenge.