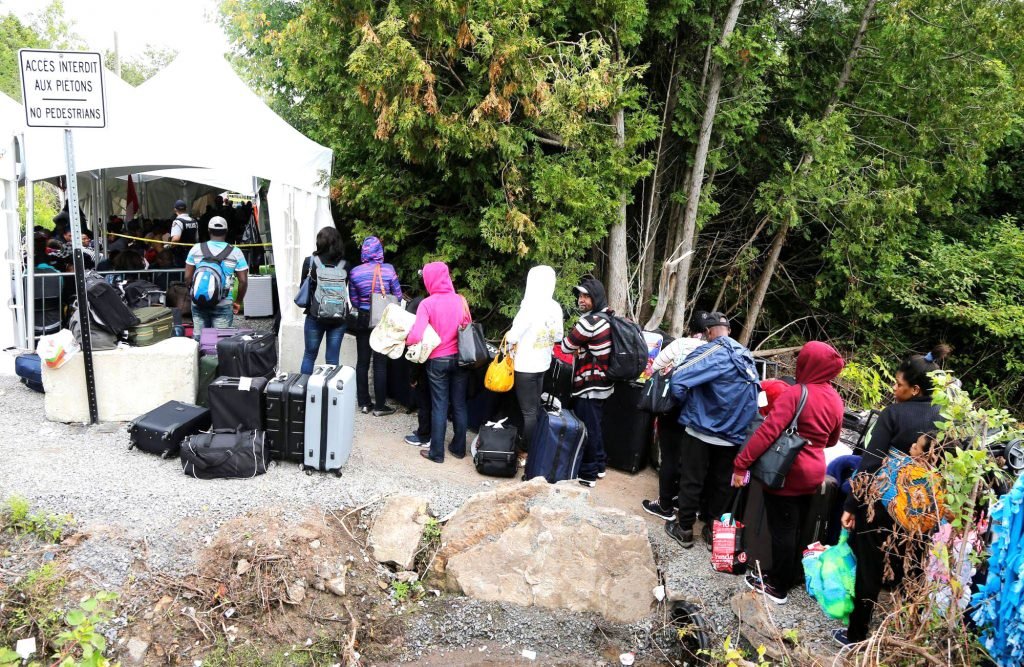 Following the election of President Trump in 2017, Samba was among the 27,000 migrants who made their way into Canada using Roxham Road- where Quebec and New York meet. This number was a dramatic rise from the 2000 migrants who crossed over in the year before.
“I didn’t know what my fate would be I had already demanded for asylum and been refused I didn’t want to get deported I had nothing back home what would I be going back to?” he explains to the CONTACT.
“I followed what people who had managed to get across did, I sold my mattress and told my roommate I wouldn’t be coming back. I didn’t get into the details because he had a mauvaise langue (evil tongue) and I didn’t want my last chance to be wasted. I took a flight from Detroit to New York and then there was a shuttle that took us upstate towards Roxham Road where we surrendered to the police and we set foot on Canadian soil.”
Samba prefers not to get into the details of his past life for the protection of his family still in Africa. He explains that if he goes back, he is a dead man.
“After one of the elections I went to France and when I heard they had burnt my house, I knew I couldn’t go back there, I got on a plane and went to America, hoping that all we had been told about the land of the free would be true.”
His story is just like scores of other migrants who flee war torn countries, natural disasters or political instability hoping that they can find a place to make their home. But the safe third country agreement may make it impossible for people like Samba to find a way out of the struggle.
Roxham road is the option many immigrants choose to use to avoid the Safe Third Country Agreement. Signed in the wake of 9/11, the deal allows both the US and Canada to turn back asylum-seekers who present themselves at official border crossings if they first passed through the other country. In practice, it has more frequently impacted asylum-seekers arriving in Canada after having lived in or transited through the United States.
But on July 22, a Federal Court judge ruled the agreement violates asylum-seekers’ rights because of what happens after people are turned back to the US if they arrive at official border crossings. Detention conditions to which returned asylum-seekers may be subject in the US violates asylum-seekers’ protections under the Canadian Charter of Rights and Freedoms, the judge found.
Justice Ann Marie McDonald said the agreement — which stops people from entering either Canada or the U.S. at official Canada-U.S. border crossings and asking for asylum — violates the section of the Charter guaranteeing “the right to life, liberty and security of the person”
“Canada was where I had my chance. In the US I was a janitor at a high school now I work in customer service, I take the train I dress well and people look at me not past me. I met my wife here and inshallah my children will be born here. If things change and I lose my chance because they want to say coming in through Roxham was illegal I have nowhere in this world to go.”
Justice Mcdonald’s ruling has been hailed as heroic and ‘first class, righteous anti-Trump foreign policy.
On the other hand, some human-rights camps have long criticized the Roxham road ‘allowance,’ saying it encourages asylum-seekers to circumvent Canada’s official land borders because if they try to enter at an official crossing, they will be refused entry and returned to the United States, subject to some exceptions.
Mcdonald’s over 60 page ruling described the conditions that asylum seekers recounted during their detention in the United States including lack of access to adequate health care or legal counsel.
Nedira Jemal Mustefa, a Muslim woman from Ethiopia and a litigant in the case, who testified that she had been forced to eat pork in contravention of Muslim dietary laws. She also was held in solitary confinement for one week at the Clinton Correctional Facility in New York State, describing the facility as “freezing cold.”
She told the court her experience had been “terrifying, isolating and psychologically traumatic.”
In her ruling, Justice Mcdonald said, “Canada cannot turn a blind eye to the consequences that befell Ms. Mustefa in its efforts to adhere to” the treaty.
Among the groups bringing the court challenge were Amnesty International and the Canadian Council for Refugees.
Mary-Liz Power, a spokeswoman for Canada’s Minister of Public Safety, said the ministry was reviewing the court’s decision, which does not become effective until Jan. 22.
Until then Samba and many like him wait with bated breath hoping the outcome will be at least “assuring,” as he said.