Advertise with Us
Home Special Features Going to PANAMA 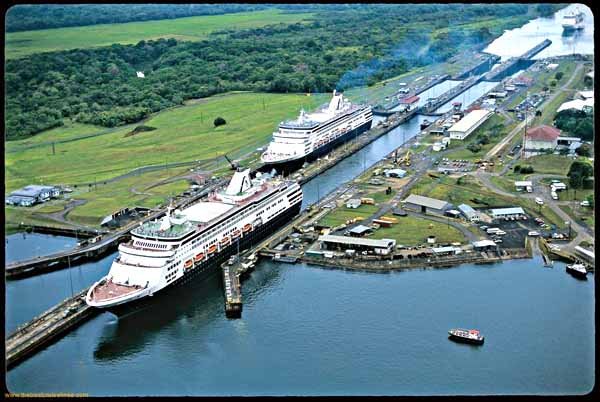 Reaching the Panama Canal on the Coral Princess. Visiting a place ripe history involving the people of the Caribbean

cruise on the Coral Princess found us in a very relaxed mood up on deck with a very cold beer called Grolsch that comes in quite a unique bottle with a reusable cap. The Coral Princess is making its way through the Gulf of Panama towards the Panama Canal.

The excitement on board is very evident even though there is a sweet air of relaxation and anticipation. As we are sailing real smooth on the Princess you can hear passengers

telling each other where they will be booking their viewing spot and that they will be witnesses to this historic event. After all this is the climax of the cruise.

Another beer please… Oh! To hell with it make it another two more beers of maybe three or four who cares, we will be at the locks the following morning. So we have all the time to reminiscent about our previous stop- Costa Rica where the mangoes were juicy and the pineapples sweet, where the peace and tranquility resonate in one’s thoughts.

Then the intercom system jolts me back to reality reminding us that in the morning we will be at the Canal- one of the greatest wonders of this fine world of ours, where thousands of people lived and died including many from the West Indies, mainly Jamaicans during the French construction era.

Before I jump the gun a part of the history that we don’t read about is how much the people of the Caribbean contributed to the building of this magnificent marvel.

I will refer to an article prepared by the Panamanian Authorities. In the 1880s French recruiter Charles Gadpaille ran ads in Jamaica offering wages that could not be matched anywhere in the Caribbean. They even showed a Jamaican who had gone to Panama and had returned flaunting his riches as a prosperous man.

This inspired a huge migration of Jamaicans to Panama in the latter half of the 19th century. Promises of riches were an empty one as they earned $0.10 an hour and the work was treacherous and dangerous. During the eighth year of excavation by the French more than 20,000 persons died mostly from the West Indies.

They tried to strike organized by the Jamaicans but to no avail as there were always more men waiting to take their place and do the work from Columbia, Cuba and other parts of the Caribbean. It is reported that only one in five workers stayed longer than a year.

When the Americans took over from the French around 1909 they realized that the working population was sparse and also that a higher grade of skilled workers would be needed from the USA and the rest of the workforce could be from the Caribbean islands, However, Caribbean governments were reluctant to allow any recruiting in their respective islands because of the fact that when the French left the building of the Canal many West Indians were left stranded and had to be repatriated by their own governments.

The government of Barbados finally gave in and close to 19,000 Barbadians representing 10% of the population and almost 40% of the Island’s adult men boarded ships to start working on the Canal. In the meantime Jamaica refused to allow any recruiting and placed a one-pound sterling tax on anyone wishing to go to Panama to work.

This tax duty meant that only skilled Jamaican workers went as only they could afford the tax. Some of them once in Panama became ministers, schoolteachers, etc. and that’s why to this day there is this strong bond between Jamaicans and Panamanians. Even now higglers (venders) from Jamaica still shop in Panama City where according to them “is the best shopping this side of the world”

Living conditions for the Caribbean workers was deplorable. They faced a system of apartheid and overt racism. Many suffered and died from snakebites and malaria. Sleeping conditions were just as bad as 72 West Indians lived in a 50 by 30 foot hut. The mess halls for black workers had neither tables nor chairs. Skilled and white workers accommodations far exceeded those of the West Indians and they were paid in gold while the others were paid in Balboas, or the local Panamanian silver, hospitals at the Canal for blacks were located in the worst part of the building.

It is documented that while the average death rate in 1906 was 4% of the whole labor force while the rate for West Indians was closer to 5% . There is so much more to the history of the Panama Canal and the peoples of the Caribbean that we would be unable to cover it all.

As I read about this great place on board this luxurious, smooth sailing cruise ship I just cannot imagine what it was like for Caribbean People who made that trip, so I said to the bartender “another one please” Ann and I decided to take a walk and see what’s going on around the ship and I could not believe the hustling that was taking place around the ship’s different boutiques. Everywhere there was a sale of everything Panamanian, Panama caps, mugs, t-shirts, beach bags, bracelets, and all types of souvenirs including huge signs that read something like “I visited the Panama Canal.”

I said to Ann “why would I buy such a big sign for $10, what will I be doing with it? Tie a string on it, put it around my neck, and walk around Montreal But we found out why later and I will explain in the next issue. Let me tell you this is the time when you will be pressured to buy something –its your last chance to buy a Panamanian souvenir while they have stacked everything on tables in front the boutiques .

At one point I thought I was on High Street in San Fernando or even Canal Street in New York, the hawking was hectic with excitement and laughter filling the air while my mind wandered back to the building of the Canal and whose idea it was to build this magnificent passage that would link the great oceans of the Pacific and Atlantic.

Was it the Spanish, the French, the British or the Americans ? We’ll see. With this thought in mind I decided to leave the excitement and return to the cabin for some relaxation. I grabbed another beer and with my feet on the balcony rails looking out at the horizon I wondered to myself did the Caribbean people pass this way?

Perhaps we’ll answer this in the next issue, until then, Walk Good.