Advertise with Us
Home Special Features “Felt the Love” 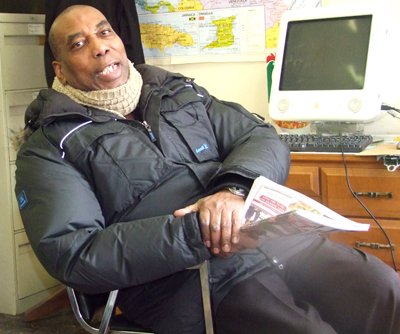 Curland back from two strokes

After dealing with a series of medical setbacks over the winter months, all-round community man Curlan Richardson is healing well and has been on the street making stopovers at some of his favorite spots in NDG, Cote des Neiges and LaSalle.
A true, true Trini, Curland has been here for 49 years.
And is a long-standing Montreal bon vivant who has been one of the driving forces behind the Lodge Brothers organization, and for many years has been responsible for helping to bring the largest band on the road at the annual Carifiesta Caribbean parade, and having some of the heartiest parties in the city. In fact, it was on his way to the group’s New Year’s Eve party on December 31, 2014 that he was stricken with a mild stroke and suffered another on January 16.
After two months in the hospital and rehabilitation, Curland is now walking around, the picture of near-perfect health.
He dropped by the CONTACT offices recently to extend a “big thank you” to the many community members who prayed endlessly for and with him and those whose support helped to nurse him back to health.
“I truly felt blessed by all the love that was extended to me,” he says.