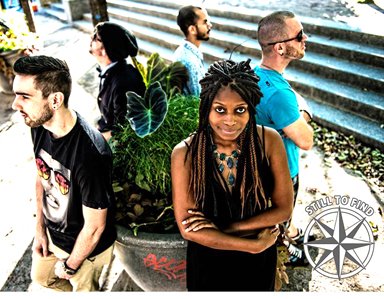 See her in her little girly dress traipsing around Montreal and Fatima Ba is the picture of innocence, as if primed to participate in a nice little pageant somewhere.

But see her on stage at alternative punk rock venues, mesmerizing crowds as the lead singer of one of Montreal’s up-and-coming alternative rock bands, Still To Find, and you get a sense of whom Fatima really is.
“Yes I love wearing my little girly dresses when I‘m on stage. I probably have more than a hundred of them,” she told the CONTACT. “I think audiences and people who know me have become accustomed to seeing me in my dresses.”
Her requisite girly dress on stage is one thing, but the fact that this young Belgium-born girl to parents from Mauritania has chosen a genre of music that’s attached to a lifestyle outside the scope of many people of color, is quite another.
“People are always surprised when they realize that I’m the lead singer of the band, but after every performance the feedback is almost always positive,” she says.
(However, there was that one occasion when some members of a local girl band went out of their way to let her know that she didn’t fit.)
Fatima, who spent much of her early life in Belgium writing music and singing songs in her room, didn’t have the courage to sing in public, not even in front of her family.
That changed when she moved to Montreal in August 2009 and was energized by “the open-mindedness in this city.”
“It’s quite different here to Brussels where racism and bigotry is out in the open, and it always pissed me off,” she says. “It affects you in everything from education to housing to finding a job.”
She remembers sitting on the bus one day in Brussels and someone threw her a banana.
That’s all behind her now, says Ba, who found her groove here in Montreal.
(The city) really was a révélation for me,” she says. “I found my place where I could really be me and express myself through my music, no longer in my room, but on stage with my band.
She started to sing in a band in May 2011. Then in 2014 she answered a Kijiji ad from a band looking for a lead singer and aced the audition. It proved to be a perfect fit with the guys and she has been with Still to Find since 2015.
“I never felt out of place as lead singer of an alternative rock band. My audiences are usually quite receptive because once I’m on stage it’s all about the music.”
She talks about that special bond that she has with the other members of the band, a group of Montreal guys who are having a lot of fun sharing their music with fans from far and wide.
They just celebrated their first video release, Just Kids, on February 21. The song is a melodic and lively number that should earn them some attention on the punk rock circuit.
“So far it’s been an amazing experience. Every time we get on stage we try to own our audiences’ heads. We want to leave an impression on them.
Checkout out Fatima Ba together with Still To Find at:
Facebook: http://on.fb.me/1OTNazF
Twitter: https://twitter.com/Still_To_Find
Instagram: https://instagram.com/still_to_find_mtl/