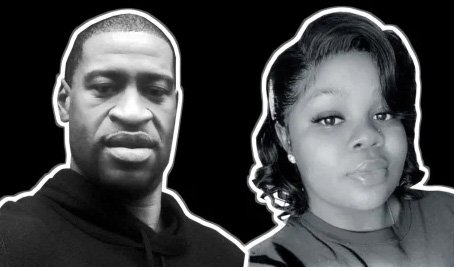 Despite receiving two significantly high payouts for the killings of their loved ones, the families of George Floyd and Breonna Taylor remain focused on securing justice and bringing change to the relationship between Blacks and the police.
It was recently announced that Floyd’s family will receive $27 million from the City of Minneapolis for his murder at the hands of the police. It’s the largest such payout in the city’s history.
Benjamin Crump, who is representing Floyd’s family sees it as a time of reckoning in the struggle to get justice for Blacks who have been abused by the police and the justice system.
The civil right lawyer in the statement after the settlement was announced said: “George Floyd’s horrific death, witnessed by millions of people around the world, unleashed a deep longing and undeniable demand for justice and change. That the largest pre-trial settlement in a wrongful death case ever would be for the life of a Black man sends a powerful message that Black lives do matter and police brutality against people of color must end.”
The settlement comes almost a year after the world witnessed the murder of the 46-year-old by Minneapolis Police Officer Derek Chauvin who was seen on video with his knees on Floyd’s neck for eight minutes as the Black man begged for his life, moaning: “I can’t breathe.”
Floyd’s family filed the violation of constitutional rights lawsuit against the City, Chauvin, and three other former police officers who stood around while Chauvin committed the murder.
Crump was also quoted as saying that the $27 million award is the largest pre-trial settlement in a civil rights wrongful death lawsuit in U.S. history. Other large payouts came only after extended trials in the courts.
The family continues to insist that they will gladly give back the money for the life of their loved ones and the hope is that Black lives will eventually be valued in the USA.
Meanwhile, Chauvin’s trial is underway in Minneapolis with the completion of jury selection. Fourteen jurors, including six non-whites, were selected to sit for the case.
Floyd’s death under the knees of Chauvin sparked worldwide protests over racism and police brutality and amplified conversations on defunding the police and the value of Black lives.
It has also triggered changes in policies on police procedures in jurisdictions across North America.
Meanwhile in Louisville, Kentucky the family of Breonna Taylor accepted a $12 million payout and forced the city to institute changes in police procedures that could result in the wrongful death of innocent citizens.
Taylor was shot and killed on the night of March 13, 2020, when a team of police officers burst into her apartment in a “no-knock” entry as she and her boyfriend slept.
Her boyfriend, thinking it was an intruder fired his gun and in the exchange of gunfire, the 26-year-old Taylor was killed.
Her killing also sparked widespread protest and repeated calls for the arrest of the police officers involved in the raid and her subsequent killing.
In the midst of those protests, the city recently passed “Breonna’s Law,” which barred the use of “no knock” search warrants as well as several other police procedural changes.