Another successful day on the links 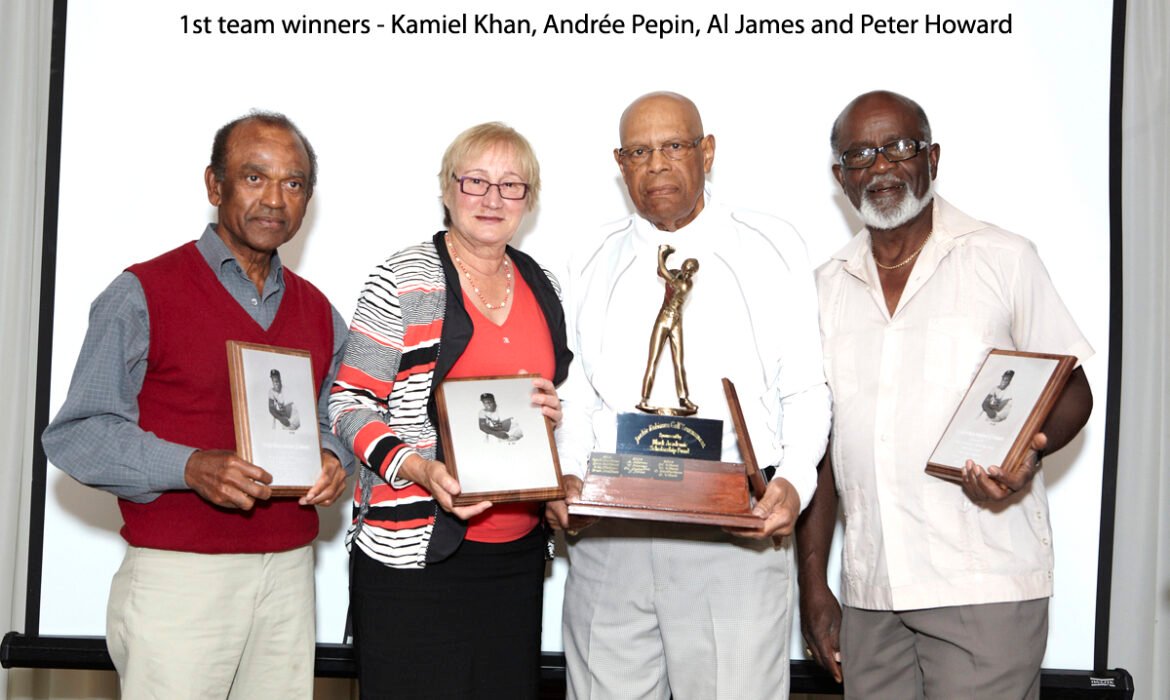 Twenty-first Jackie Robinson International Golf Tournament a hole in one

This year the weather Gods cooperated by delivering a glorious day on July 17 2015, for the 21st Annual Jackie Robinson International Golf Tournament hosted by the BLACK ACADEMIC SCHOLARSHIP FUND (BASF).
As usual, the multi-racial, multi-ethnic, multi-disciplined golfers, representing a wide cross section of Montreal, were energized and ready to make their mark on the course at Club de Golf Saint-Raphael in Ile Bizard, Quebec. This year the event drew about 150 guests/participants, 98 of whom were golfers. (The “after play” crowd has increased because the location is close to Montreal and the West Island.)
After a lavish, hearty, all-you-can eat B.B.Q with all the trimmings, the tournament got underway at noon as the golfers gathered to be marshalled to the holes per the “Vegas shot gun” format. By the end of the day, the male and female stalwarts rose to the top.
The fun didn’t stop after the game. The cocktail hours provided an opportunity for g

d the attractiveness of the Raffle prizes. There were 5 grand prizes, 15 consolation prizes, as well as a door prize.
The net proceeds of the tournament helps to augment the scholarship fund. This year, on September 13 2015, at the Le Nouvel Hotel, the BLACK ACADEMIC SCHOLARSHIP FUND will award 4 scholarships in the amount of $7,000. The recipients vary from undergraduates, nursing and other areas.
Among this year’s guests were Carl Estwick, Dawn Sealey, Romeo Saunders, Allison Dacosta, Brendon James, Errol Johnson, Ian Robinson, Simeon Pompey, Anita Brown-Johnson, Dexter G. Johnson, George W. Grant, Chris Mapp, Keith Mathews, Chris Mamby, Anthony Byer, Gary Matthews, Charles Este, Tony Payne, John Crawley, Joseph Jones, Garry Lawrence, Telford Streete, Uton Mclean, June Keene, John Nicholas and Sandra Stupart.
A special tribute was paid to the chair of the Golf Committee, Glen Gunning and his team, which included Phillip Alleyne, Garry Saunders and Theresa Benedek.
A special few words of appreciation was expressed to the volunteers, which included Gabrielle Piggott, Millicent White, Gabrielle Piggott, and Pamela Gunning.
In her closing remarks Sylvia Piggott mentioned how grateful she was for the continued support, particularly from our community. She also extended a special invitation to next year’s tournament scheduled for July 8 2016, at the same venue.