Advertise with Us
Home News After Ferguson 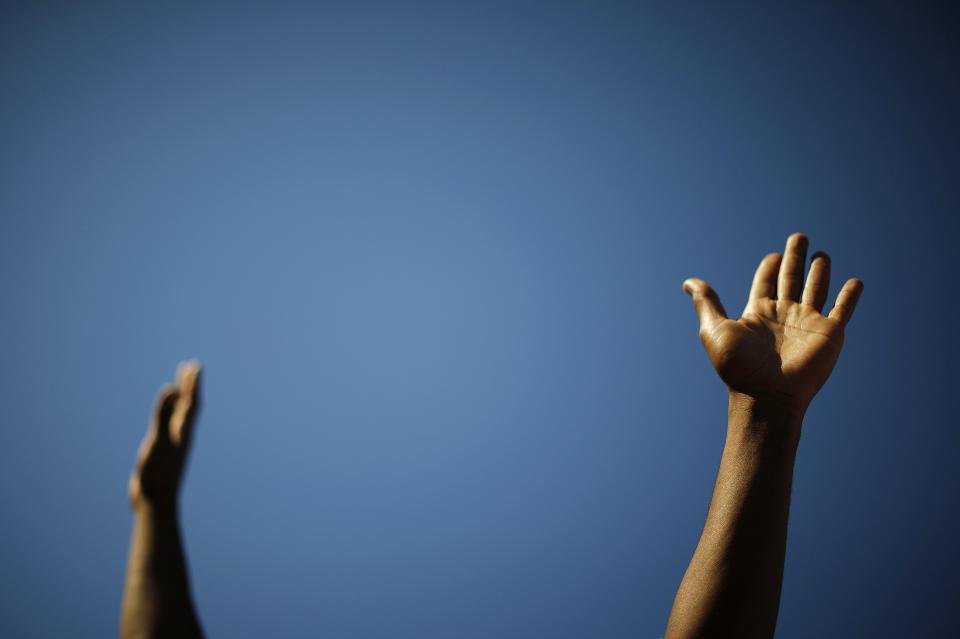 It’s not just about Ferguson anymore.
Since the Missouri Grand jury decided not to indict Police Officer Darren Wilson for the Aug. 9 shooting of unarmed Ferguson teenager, Michael Brown, pockets of protests continue to erupt in cities across the United States. And calls for police accountability in dealing with Blacks and other minorities are resonating across the country.
Days after the decision was rendered by St. Louis County Prosecuting Attorney Robert McCulloch, masses of protestors took to the streets in more than 40 cities rallying against what was seen as a flawed process from the beginning.
And although the Grand jury chose to discard evidence that the teenager had his hands in the air when he was gunned down by the police officer, supporters of Michael Brown stay true to the words of the many witnesses who testified as such.
The raised hands remain the enduring symbol of this particular  protest, together with the chant: “hands up, don’t shoot!”
More than a week after the grand jury decision, unrest continues to simmer.
On Sunday, November 30, five St. Louis Rams wide receivers –Tavon Austin, Kenny Britt, Stedman Bailey, Jared Cook and Chris Givens – stood with their arms raised during pregame introductions in a show of solidarity with the cause.
Then on Monday, December 1, President Barack Obama convened a series of meetings with civil rights leaders, community activists, law enforcement officials and some members of his Cabinet seeking ways to bridge the gulf of distrust that divides Blacks and other minorities and the police.
And in so doing he signaled his intention to go further than other futile attempts to change what for many is an endemic culture among police and in a justice system that undervalues the lives of Blacks, especially Black youth.
Following the meetings, Obama promised that ensuing policies would go further. He was quoted as saying that “this time will be different because the President of the United States is deeply vested in making it different.”
And added that: “In the two years I have remaining as president, I’m going to make sure that we follow through.”
Among his first moves is to try to accommodate the wishes of the Brown family, securing money to purchase 50,000 body-worn cameras for police officers.
He is also moving to regulate the transfer of heavy-military-style weapons and equipment from the Pentagon to local police. And as part of his stated commitment to maintain nationwide discussions and face “hard truths” about race in America, Obama is set to create a new task force led by Philadelphia Police Commissioner Charles Ramsey and former Assistant Attorney General Laurie Robinson to examine initiatives to reduce crime and building public trust.
On another front, Attorney General Eric Holder also promised a frontal attack by his department to end the scourge of racial profiling, which has been the launch pin for many destructive and deadly confrontations between police and minorities.
Holder was at the Ebenezer Baptist Church in Atlanta, where he launched a series of nationwide conversations following Brown’s murder and the Grand jury decision.
At the federal law enforcement level, he promised “rigorous new standards to help end racial profiling, once and for all.”
Those changes he says will come in short order.
Holder’s department is currently overseeing two civil rights investigations in Missouri: one into whether Officer Wilson violated Brown’s civil rights, and the other looking into Ferguson police force overall track-record with minorities.
And in Ferguson the justice system remains under scrutiny even as the mayor announced several new initiatives to correct perceived imbalances. Much of it has to do with creating incentives to bring more Blacks into its police department.
In the face of all these power posturing and moves from the president downwards, responses to Officer Wilson’s murdering Michael Brown show America to be a deeply divided place, when it comes to race relations.
Like so many other polls, a recent one from A Huffington Post-YouGov shows 62% of African Americans believed Wilson was at fault in the shooting of Brown while only 22% of whites shared that belief.
The differences were just as pronounced when a Washington Post and ABC News poll asked: “Would you approve or disapprove of the federal government bringing civil rights charges against the police officer?”
As expected, 85 percent of African-Americans and 67 percent of Hispanics approved while 57 percent of whites disagreed.
Experts looking at those numbers are not in the least surprised at the chasm in the opinion of the two groups, chalking it up to the fact that Blacks live with the almost daily experience of being targeted by police.
One estimate has it that every 28 hours police or a state security representative kills a Black person. In addition to Michael Brown, other high profile incidents of unarmed Black persons murdered are Eric Garner in New York, John Crawford in Ohio and Renisha McBride in Detroit. All of it contribute to making blood boil in Black communities when another incident surfaces.
And with it the fire-rage keeps people on the streets across America, many vowing to stay until real change comes.