“A Chill Dude who was a Great Basketballer and Really Funny” 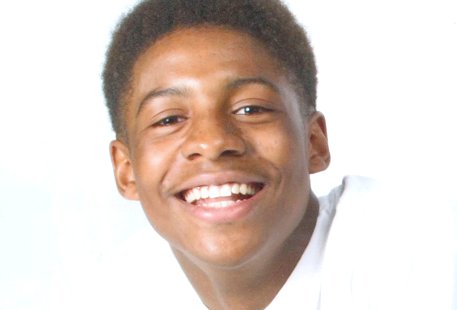 On Friday morning, November 18, we woke up to the news of the death of Darius Brown, which reverberated across the city because the 17-year-old was the son of Steve Hennessy and Roxanne Brown, two highly respected community workers and youth advocates.
In the days following what has to be the most tragic moment of their lives, Hennessy told the CONTACT that the family has chosen to look beyond the public distractions and focus on giving his son a proper burial, and at the same time remembering him for being “a treasure in their lives.”
“Darius was a loving person who really loved kids, and would do anything for his two sisters,” says Hennessy, remembering his son. “The night before he died, he was at home babysitting for us.”
He was truly a blessing to our family, especially in the eyes of his grandmother, Roxanne’s mom, who claimed him from birth. He was her first grandchild.”
Darius is a true son of the community, having spent much of his life growing up at the Westhaven Centre in western NDG where both his mom and dad worked for decades. He learned all about volunteering there taking care of the turtle that has also been part of the place for decades.
He attended St. Monica’s Elementary in NDG and Lakeside Academy in Lachine before moving to Horizon High School in Pointe Claire.  Recently over the summer months, he started working at the Centre as a camp counselor.

One of Darius’ passions was basketball and almost everyday of the week he was at West Haven where he was part of the team and only recently started to coach some of the younger players.
“That was a big deal for him, “ Hennessy added. “He was real excited about getting into coaching because he took the game seriously. He also took his body seriously and tried to eat and train the right way.”
On the evening that the CONTACT dropped by Westhaven, Hennessy was there with three of Darius’ boys, Walee and Afreyay, both 17, and 18-year-old Devin… they play on the team together and have been friends going back several years.
He was especially tight with Walee, who says they go back since they were 12 or 13 and have been playing ball ever since.
“Darius was a shooting guard and he was really good because he could jump…”
“Yes,” Devin agrees. “He sure had hops. Basically he was just a chill dude who was a great basketballer and really funny”

In addition to his prowess in the b-ball court, Darius’ friends recall his wicked sense of humor.
Afreyay and Walee remember just sitting around and telling jokes.
“He made us laugh…. sometimes you just had to look at him and you’d start laughing,” says Afreyay.
Hennessy took obvious pleasure in listening to the boys speak about his son and ever so often he would engage with trying to remember which was Darius’ favorite NBA team, whether it was the Orlando Magic of the past or was it always the Toronto Raptors.
One thing for sure, his dad says, Darius was a big Michael Jordan fan and he cherished his Jordan sneakers.
These days Hennessy says he is being sustained by the outpouring of support from relatives, friends and the community.
On the evening of Monday, November 21, more than 100 youth gathered at the West Haven Centre.
He said they came just to be there with each other to remember: “For a long time we all just sat there in silence.”
Carla is Darius’ godmother. She too appreciates the good of being together. As soon as she received the news, she left Toronto and headed straight to the side of her childhood friend, Roxanne.
“Just to be here for her and help in whatever way, she wants me to,” says the former Montrealer who was in the delivery room and cut the umbilical chord when Darius was born.
“He was always a beautiful soul and I know how blessed I am to have had him as part of my world.”
She says if there is a lesson to be learnt, it has to be individuals like Darius are usually judged unfairly.
““His team of friends has shown me that they are such an amazing group of individuals”.
It’s sad to think that someone might have seen Darius and judged him for what he looked like, not knowing how he touched the lives of others in such a beautiful way.
“Darius touched many lives in a profound, beautiful and positive way. He spent such a short time here on earth, but he definitely left his mark. Whenever we spoke I always made sure to tell him: “I love you”
Tentative plans are been made for Darius’ funeral to be held on December 3.