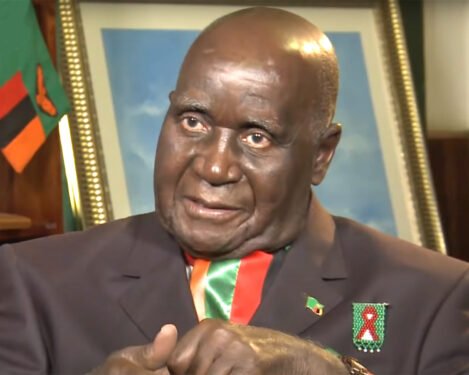 Zambia’s former president, Kenneth Kaunda, the father of the country’s independence who ruled for 27 years died on Thursday June 17. He was 97.
Kaunda had been admitted to the Maina Soko Medical Center, a military hospital in Lusaka, on Monday where authorities disclosed he was being treated for pneumonia. His son, Kambarage Kaunda, announced the Zambian founding president’s passing via a post on facebook and asked for prayers for the family.
Kenneth Kaunda was born in 1924 to parents from Malawi. His father, a Protestant missionary, had gone to Zambia, at the time a British colony. Kaunda, chose to become a teacher. This, at the time, was considered an important position for a Black person, because teaching at that time was primarily for the whites.

However, after a few years in the profession he decided to enter politics.
Although the colonial master at the time was uneasy with his brand of “politics of liberation” and imprisoned him several times, he remained steadfast, and eventually found himself at the head of the Zambian independence movement..
He was nicknamed the “African Gandhi” for his non-violent activism, Kaunda led the former British protectorate of Northern Rhodesia to a bloodless independence in October 1964. His “United Party of National Independence” won an absolute majority in the first general election of the same year.

He also became an AIDS activist when he publicly announced that one of his sons had died of the disease.

Germany has to agreed to pay Namibia €1.1bn as it officially recognised the Herero-Nama genocide at the start of the 20th century, in what Angela Merkel’s government says amounts to a gesture of reconciliation but not legally binding reparations.
Tens of thousands of men, women and children were shot, tortured or driven into the Kalahari desert to starve by German troops between 1904 and 1908 after the Herero and Nama tribes rebelled against colonial rule in what was then named German South West Africa and is present day Namibia.
“No amount of money in any currency can truly compensate the life of a human being,” Namibian Vice President Nangolo Mbumba is quoted as saying.
“We need to recognise that the amount of 1.1 billion euros agreed upon between the two governments is not enough and does not adequately address the initial quantum of reparations initially submitted to the German Government.”
He added that Germany “has agreed to commit to revisit and renegotiate the amount as the implementation of the reparations ensues.”
The two nations reached the financial agreement as part of a deal in which Germany acknowledged the massacres were a genocide. The accord marks the end of negotiations that had begun in 2015.
Majority of the Namibians rejected the outcome of the talks and dismissed the amount offered as insulting. They called on Germany to directly compensate victims in the form of “reparations” — a term Berlin has pointedly avoided.
Many are also angry over a statement by German Foreign Minister Heiko Maas, who said that the killings were a genocide “from today’s perspective.”
German President Frank Walter-Steinmeier is expected to give an official reconciliation speech to the Namibian parliament, although the date for his visit has yet to be announced.

On June 16, the UN’s top humanitarian official Mark Lowcock told members of the security council that there is famine in the Ethiopian region of Tigray. Some 350,000 people in Tigray are living in famine conditions with millions more at risk.
“We are at a tipping point” Lowcock said.
So far, the urgent appeals from the humanitarian community have not been met with commensurate action by the key players in Tigray, including the Ethiopian government. Since November 2020, the federal government of Ethiopia, backed by troops in neighboring Eritrea, have fought a war against the Tigrayan People’s Liberation Front, the TPLF.
The TPLF is the dominant political force in Tigray region, and was the dominant political party in the federal government for decades as well.
“Alarming new data has today confirmed the magnitude of the hunger emergency gripping Tigray,” David Beasley, the executive director of the World Food Program, the anti-hunger agency of the United Nations, said in a statement.