With his video camera in hand 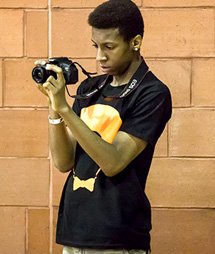 There’s a lot to learn and lots of choices to make for a Black youth growing up in Little Burgundy.
Seventeen-year-old Josh Oliver says a lot of his friends made wrong choices and are ending up in bad places, but from early in life he chose to walk a different path and usually took his video camera with him.
In fact, that video camera has taken young Josh to cities far and wide across North America recording basketball games and maki

ng highlight videos. His ability to capture the moments on the court and creativity in packaging them into highlight reels make him a top ranker among basketball staffers and players in Montreal. He also makes music videos and documentaries.
In September, his video camera will take him to a place that many of his friends never even heard of when he accepts a full scholarship at Cegep de Thetford in Thetford Mines, two and a half hours out of Montreal, where he will study Sports Management.
Steve Edwards, coordinator at BUMP in Little Burgundy where he works with area youth, says over the years, he has seen many rise and many remain stagnant, but says Josh’s determination to use his passion for videography to elevate him and showcase others is a story of inspiration.
When you meet Josh, he comes over as the average teenager, nonchalant and cool. Get him talking about videography and basketball and that’s when you see him overflow with excitement and bubble with confidence.
You see, the Little Burgundy-born and bred youth has already spent more than half of his life behind the cameras, shooting videos of basketball games across Montreal and in many cities in the U.S. and has become the go-to guy for high schools, colleges and community teams that want their games recorded. So far he has recorded dozens of games for teams such as Sun Youth, Dawson College, Lucien Pagé High School, Meadowbrook and Montreal United travelling across the city and the province immortalizing the exploits of some of Montreal’s most spectacular players.
Such is his talent and status around the courts.
Josh has been offered scholarships by three CEGEPs, presenting him with opportunities to study and become part of the varsity staff.
He accepted the scholarship from CEGEP de Thetford, because of a long history with the team.
“It was an easy choice for me because I’ve already made about 20 trips to the U.S. with the basketball team, so I’m familiar with the staff and some of the players,” says Josh, who is getting ready to graduate from Ecole FACE. “Also, I’m really looking forward to studying, Sports Management because it will help me get to the next level as I work on developing and marketing players.”
Josh has been mentoring and working with a few high school and college students in an effort to help them secure scholarships from U.S. universities, something that tweaked his interest after he completed a community business initiative program offered by students from Concordia University’s John Molson School of Business.
So far, he says at least two of his players are provoking interest from schools south of the border.
It’s all part of his videography project, which occupies between three to seven hours of his time after school, as he edits and manipulates shots, and adds sounds and music to showcase players and highlights of games.
Josh made his first video, a spoof on Bart Simpson, as a Grade Five student at École De la Petite-Bourgogne that won him a province-wide award.
He says the basic training he acquired from his teacher then, triggered his interest and made him want to learn more and do more.
A year later, he made a 10 minutes documentary on Little Burgundy, capturing many of the institutions and individuals who are now part of the storied   neighborhood.
He is also much sought after by local RnB and Hip Hop types for their music videos.
More and more Montrealers are logging on to his two Facebook pages to enjoy some of his B-ball highlights and community postings.
As he readies himself to start classes at Cegep de Thetford, Josh is hoping that the community will assist him to purchase some new equipment for his studies.
He needs a camera, laptop and other equipment, which will run him way over $5,000 and he is hoping an individual or organization can lend a hand.
Edwards noted that it’s the least the community can do to help a kid that’s making the right moves along the right road.
Reach Josh Oliver at jayolly.films@gmail.com or 514-409-6559.