Ushering In A New Phase at WIBCA 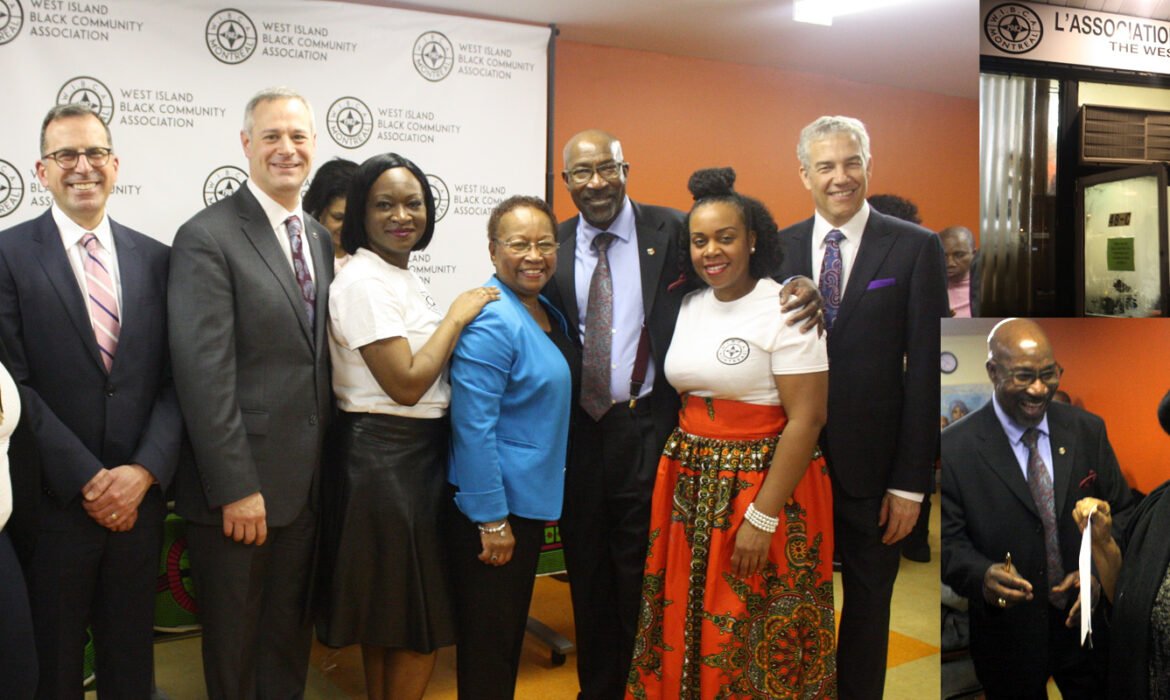 On Thursday, February 7, the announcement that they paid off the mortgage on the building that houses their offices at 48A – D 4th Avenue, Roxboro signaled another phase in the history of the West Island Black Community Association (WIBCA).
According to the association’s chairperson, Kemba Mitchell it’s an opportunity “to ease up the stress that comes with paying a mortgage and operational cost.”
“Now we can focus on our (long-standing) plans towards opening up a drop-in-center for youth.”
The announcement came with great fanfare as dozens of supporters and elected officials joined Mitchell and other WIBCA members, past and current, to celebrate what is a milestone for the organization and the community.
Now in its 37th year, WIBCA stands as one of a handful of our community organizations (in the English speaking sector) to ever own a building, and certainly the only one still standing.
The building, which comes with three levels, a main floor, an annex and a basement was purchased in 1994, following a brief period of displacement that saw the association functioning out of available public spaces.
And it was out of the dogged determination of some of the founding members that the association was able to acquire the building at an initial cost of just over $100,000.
The association had been paying on their monthly mortgage diligently since.
It was this past November, at the Annual General Meeting when Errol Johnson, one of the association’s strongest supporters learned from the financial report that they had a balance of $16,000 to be paid off in three years.
Knowing how much that amount can add up over that period, Johnson, who is deputy mayor of DDO and one of its longest city councilor, had a bright idea to pay it off by February 2019 a symbolic act for Black History Month.
And he sprung into action.
He nudged MP Frank Baylis who was sitting next to him at the meeting and told him his idea.
The Liberal Member of Parliament for the west island riding of Pierrefonds-Dollard des Ormeaux immediately donated $3000.
Next, he went to Sun Life, where he has been a financial advisor and Insurance broker for close to five decades: they handed over $5000.
He then called his big sister, Thelma Johnson, founder of the Caribbean Pioneer Women of Canada. She pledged $2000.
His next call was to his younger sister Fay. She mobilized members and supporters of WIBCA and came up with, $3000.
Johnson then called two stalwarts of the community and supporters of WIBCA, Lee Carr and Stanley Clarke and raised an additional $3000 plus.
He reiterated his commitment to keeping the association financially strong because he says as a community we have to do our best to build and sustain institutions.
As founder of the West Island Blues Festival, Johnson has donated more than $100,000 to WIBCA over the past 14 years.
Johnson was joined by several of WIBCA’s past chairperson at the event, including his wife, Veronica Johnson, a retired Immigration and Refugee Court judge, Dr. Martin Chato, Kenneth Bynoe and Mrs. Thomacita James.
Also present was one of the founders Mrs. Margaret Jolly and two children of co-founder Norma Husbands.
Johnson took the opportunity to introduce Mrs. Eileen White, who initiated the “building fund” in the early 1990s and was one of the signatories of the original mortgage.
She ripped-up a symbolic copy of the document to usher in a new phase for WIBCA.