The Story of Ota Benga 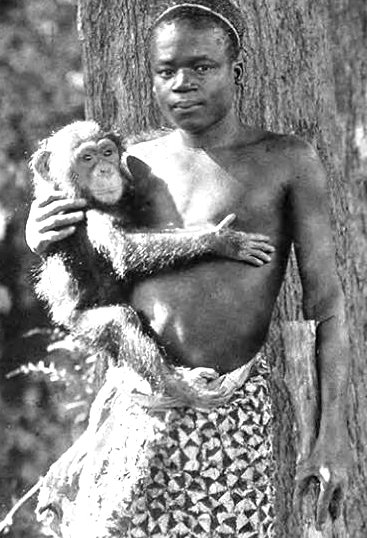 Exhibition at the Bronx Zoo in September 1906

Ota Benga was a human being from the Congo who was put on exhibition at the Bronx Zoo in New York in September 1906.
Before and after the zoo was closed Ota Benga had free range of the zoo.
But once the white people started flowing in the exhibition area, Ota Benga was forced back behind bars inside the monkey exhibits at the zoo where children and adults laughed with delight.
Unfortunately, Ota Benga’s story has not been told often but is one that needs to be heard.
He was said to have been captured from his home by so-called mercenaries and brought to America with other members of his tribe who would soon be subjected to similar torture.
After years of being passed between various groups and exhibits he wound up at the Bronx Zoo in New York where one writer estimated that during September of 1906, nearly a quarter of a million Americans, up to 500 at a time, crowded the monkey house to enjoy the spectacle of the 103-pound, 4-foot-11 so-called Pygmy.
Reportedly he just sat on a stool in silence, at times surrounded by primates and other animals unable to understand the spectacle.
The sign outside his cage attempted to identify him:
The African Pygmy, Ota Benga
Age, 23 years. Height, 4 feet 11 inches.
Weight 103 pound. Brought from the Kasai River,
Congo Free State, South Central Africa,
Constant protest by Black clergymen and other human rights advocates as well as defiance and resistance by Benga forced the zoo to release him.
He was sent to an orphanage for “colored people” where after being “Americanized” he was set free.
Unfortunately, after a life full of sorrow and despair, Ota Benga depressed and isolated, committed suicide by shooting himself in the heart, at only 32 years of age.