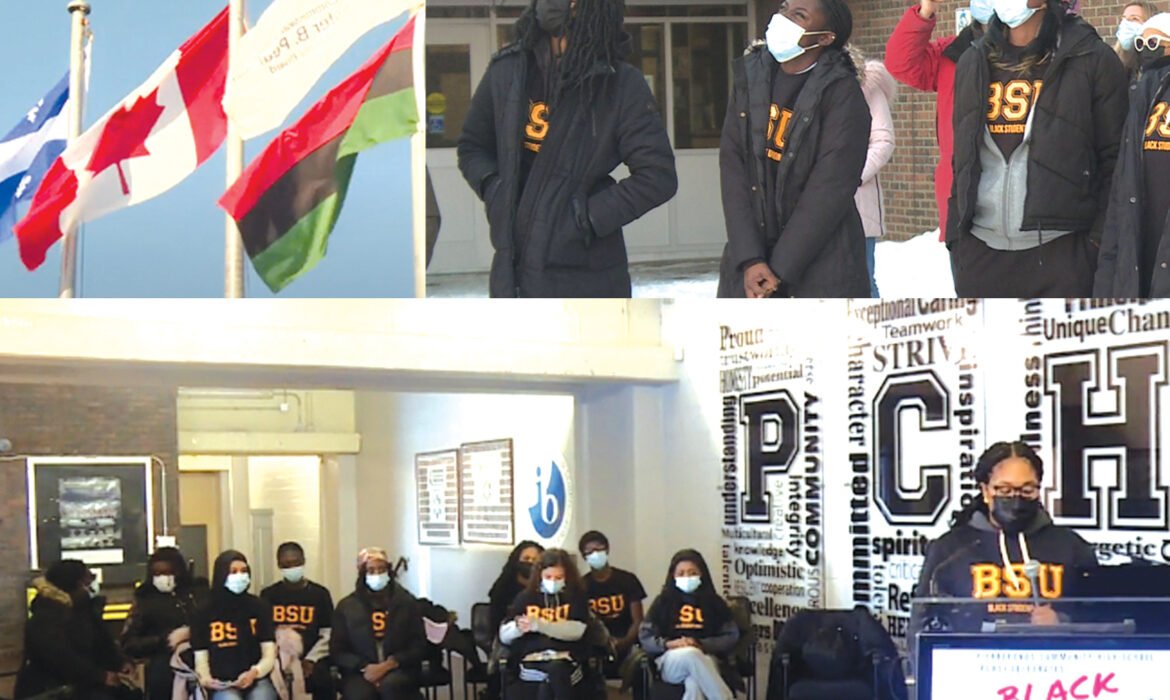 This was the theme at the inaugural flag raising ceremony that was held at the Pierrefonds Community High School last Tuesday, February 1st. Standing shoulder to shoulder with the Canadian, provincial and schoolboard flags, founding members of the school’s Black Student Union raised the Pan-African flag to the sounds of Montreal jazz legend, Oscar Peterson’s Hymn to Freedom.
Since its conception, the Pan-African flag has been a symbol for the unification of Blackness, across the diaspora—from the stories that bond us, to the cultures that make us uniquely beautiful; a fitting emblem for this historical event.
“It’s honestly an amazing thing, because not many High schools have the opportunity to do this,” shared Secondary 5 student, Kayla Johnson about the ceremony’s significance. She goes on to say, “sometimes when you explain it to students, they really don’t understand why it’s so important.”
This is why, according to Kemba Mitchell, the school’s Community Development Agent, this was a moment that was long overdue. As the Community Development Agent, Mitchell uses community collaboration to identify and curate a culture where students can see and explore themselves, both in the classroom, and beyond.
She recalls first being approached last year by Black students who wished to have a safe space, “just for them.” Here, Black students would have the ability to show up as themselves and engage in the conversations that they were unable to have within their often-lacking curriculums.

And for non-Black students who wished to join, it was an opportunity to support their friends in true allyship, while learning about their cultures, in the process.
“There was nothing ever like this … no way of support [or] union between Black students,” Jaleel Joshua Meek, also in Secondary 5, stated about the monumental event.
Though only in its first year, last year, the BSU was able to bring the school together in acknowledgment of Kwanzaa, placing Blackness—it’s traditions and heritage—on full display.
This was also the goal for the flag raising ceremony: a moment for students, staff, and the community, at large, to take notice, and start a much-needed conversation about how and where Black History is placed within the retelling of Canadian history.
With activities planned for the entire month, the students hope to continue to impact their community by keeping the conversation alive, long after Black History Month has ended.
While it has only been a few weeks, Mitchell and the BSU have already received calls from local elementary and secondary schools, requesting the students visit and speak to their classes.
Many of the students in the BSU have yet to truly understand the significance of what was gained that day. While the creation of a Black Student Union has allowed them to show up more confidently for themselves, this is clearly just the beginning.
What Mitchell hopes comes next is acknowledgement from larger tertiary institutions (CEGEPs and Universities), who will also play a significant role in these students’ futures. While the flag might only be flown until the end of the month, the influence of these student trailblazers is undeniable and their actions will be cemented as a pivotal part of not just Black history, but Canadian history.