Advertise with Us
Home News Community News Students at the top: Alaina, Aliah and Ciarra

Students at the top: Alaina, Aliah and Ciarra 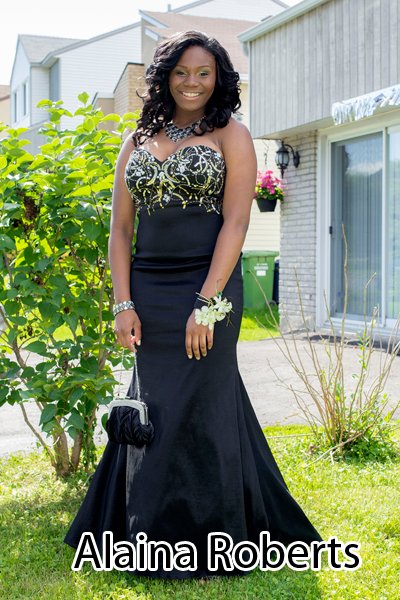 m the 2015 outreach initiative of #SheDidThatProm, a project established

by Tamraa Greenidge and Katrina Nurse, two young West Island residents, to assist deserving high school students.
Sixteen-year-old Alaina Roberts who recently graduated from Riverdale High (she transferred after three years at Beurling Academy) won the all-expense paid prom package, which included a new prom dress, new shoes, hairstylist, makeup, accessories, payment of prom ticket, part payment of transportation and professional photos throughout the night.
Also, two scholarships based on excellence were awarded to
Aliah Guerra, a Vanier College student who is in the Social Science department majoring in Law, and Ciarra Callender, who recently graduated from John Rennie High School where she was enrolled in Enriched English, Enriched French and Advanced Math programs.
Roberts, who is eyeing a career in journalism, says she fancied her chances of copping the big prom giveaway after reading the advertisement in the CONTACT, calling for applicants. And advises other girls to go after opportunities as they become available.
“You never know until you try. It’s better to say, “Oh, well” than to ask “What if?” Seriously, when you see the opportunity, seize it. You never know if you’ll be given the chance again, just going for it! “
Her mom, Galine Gurley, admits to being a little concerned about not being involved fully

in her daughter’s preparation for prom, but knew that it was going “to be all good” after she saw “how well Tamraa and Katrina worked with Alaina as they went shopping. I began to trust that they were going to do something really great and that her prom was going to be memorable.”
Conviction came when the big day arrived on Friday, June 26.
“When Alaina walked down the stairs all dressed up and looking like a movie star as everyone took pictures of her like paparazzi and adoring fans, I gazed at my daughter, now looking fully

transformed into a young woman, knowing that this is the beginning of a new chapter in her life… I was grateful that it was a moment like this. No young girl could have asked for anything more.”
Alaina will be taking another step towards her journalism career next semester when she starts the Arts, Literature and Community program at Vanier College in the fall.
Scholarship winner

Aliah, who has made her mark in regional high school public speaking competitions during her years at Westmount High, is well on her way to a career in the legal field.
She says the scholarship money

will help to ease the way forward.
“The timing just couldn’t have been any better to be blessed with this scholarship,” she says. “ First semester took a lot out of me, not just in terms of adjusting straight from high school, but financially. So this scholarship gave me the extra motivation I needed to continue to do well and go for what I want to do. Thank you!”
Ciarra, who is eyeing a career in healthcare, is on her way to Dawson College’s Health Science program.
She says as a volunteer at a local hospital, she is being exposed to a range of possibilities in exploring a career in the field, all of which is being made easier by this vote of confidence from the organizers of
#SheDidThatProm.
“It was a nice surprise… I am very grateful for the support for my education, and I am motivated to continue to do well in school.”
Organizers Greenidge and Nurse are excited by the increasing popularity of the project.
Greenidge stated that it could not be possible without “the support of everyone who donated to our initiative and those who came out to support at our (recent) Zumba fundraiser

.”
“We would also like to extend a very special thank you to our sponsors: Bestbite Catering, Carolyn Robinson, Jon-Claude Alexander and Curzon Staffing. We would also like to thank Heather Jones (makeup artist), Jessica Wilson (hairstylist) from Sassy Salon and Maria Kamisis (photographer).”
In what Greenidge and Nurse say is an attempt to strengthen partnerships and networking opportunities among community groups

, they have teamed up with the Eva R Gsum Foundation, which assists athletes in pursuing post-secondary education. That collaboration has facilitated the awarding of the two additional scholarships this year.
Learn more about  #SheDidThatProm at www.shedidthatprom.com