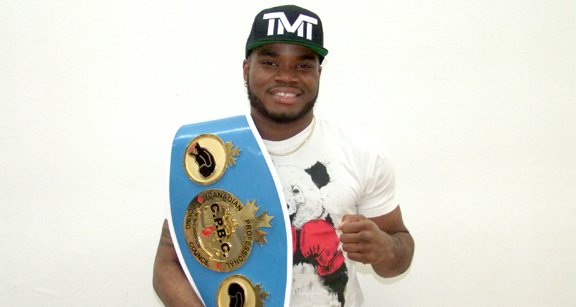 There’s a buzz around the community after Shakeel Phinn sent shockwaves across the Canadian boxing circuit by capturing the Canada Professional Boxing Council super middleweight title, when he easily defeated hometown favorite Paul Bzdel (5-7-1) at the Prairieland Park in Saskatoon, on Saturday, February 27.

Phinn was in tough in what was only the 7th bout of his professional boxing career, fighting a hard-scrabble boxer known for his toughness and ability to absorb punches

. But he defied expectations by dominating the 10-round contest and scoring a unanimous decision, winning at least seven rounds on each of the judges’ scorecards.
“I knew that I had to either knock him out or dominate the fight because I was in his backyard,” Phinn told the CONTACT. “On several occasions during the fight I thought he was going down but he is a strong courageous fighter. I respect that.”
He says he was also happy that he was able to go ten rounds and come out of it feeling strong and still raring  to go
The win ups his record to 6-1.
“When I decided to turn pro just over a year ago, I never expected to be wearing the Canadian belt after just about 35 rounds of fighting, but it shows what can happen when you believe in yourself and work hard.
He credits much of his success to having “the best coach in the world” Ian MacKillop and the support of local boxing legends Otis and Howard Grant, and also well-known kick boxing icon, Herby Whyne.
When the decision was handed down after the championship fight, social media erupted with shout-outs of congratulations to the young Montrealer who is highly popular at his training grounds, the Grant Brothers Gym and the Hard Knock Gym, and at his workplace, the West End Gym.
Phinn, the son of former amateur boxer and now a highly rated personal trainer, Benjamin Phinn, is also a member of the Geddes family, a massive Montreal clan with widespread involvement in our community. His mom is Ullette Geddes.
He ventured into boxing by chance trying to enhance his conditioning while playing football at Champlain College in St. Lambert. He joined Club de Boxe oneXone Boxing Gym in St. Hubert where he soon got caught up in the fight game and loved it.
He eventually had a sparring session against one of the three guys there and in his words “got my ass kicked.” But he was hooked by the lure of boxing and signed up as an amateur fighter with a coach at the gym.
Success came quickly, and he won the Quebec provincial championship in his first year, and under the guidance of his new coach MacKillop, carved out an impressive amateur career over the next three years, winning well over 90% of his 50 fights.
At the end of 2014, Phinn decided to turn pro and received the support of his coach and began a meteoric rise.
On January 31, 2015, he demolished a highly rated prospect Eddie Gates in his first professional fight at the Casino Lac Leamy in Gatineau and was on a high.
Four months later in April, at the Adonis Stevenson–Steve Bika undercard in Quebec City he was brought back down to reality when he was defeated by Roody Rene.
“It was a fight I should have won ten time out of ten, but I think I was overwhelmed by the lights and the crowd.”
The defeat triggered a bit of self doubt but my coach spoke to him Phinn was back on track in matter of months winning against tough opponents in Baltimore, Toronto before going to Sorel, Tracy to take on the #3 ranked light heavy weight in Canada.
He demolished Guillaume Tremblay-Coude in front of his home crowd in a fight made memorable because he suffered his first knock down.
“It was a kind of a weird feeling but  I realized that I wasn’t hurt so I got up and took care of business.”
That fight paved the way for the February 27 bout for the Canadian Super Middle weight belt against Bzdel.
It was an opportunity Phinn didn’t take lightly.
Just after the Holidays he made a trip to last Vegas where he spent  10  days at the famed Floyd Mayweather Gym, and worked extensively with Hall Of Fame boxer Eddie Mustafa Muhammad.
Phinn says the experience at that gym unlike anything you’d expect in  Canada.
“Just a sparring session was a like a title fight with your sparring partner trying to knock  you out and others cheering him on.”
In the end, it all went toward the ultimate goal: a championship belt.
Phinn is now ranked #15 in the North American Boxing Organization.   The Super Middleweight Division title is vacant. … Guess who is eyeing it.