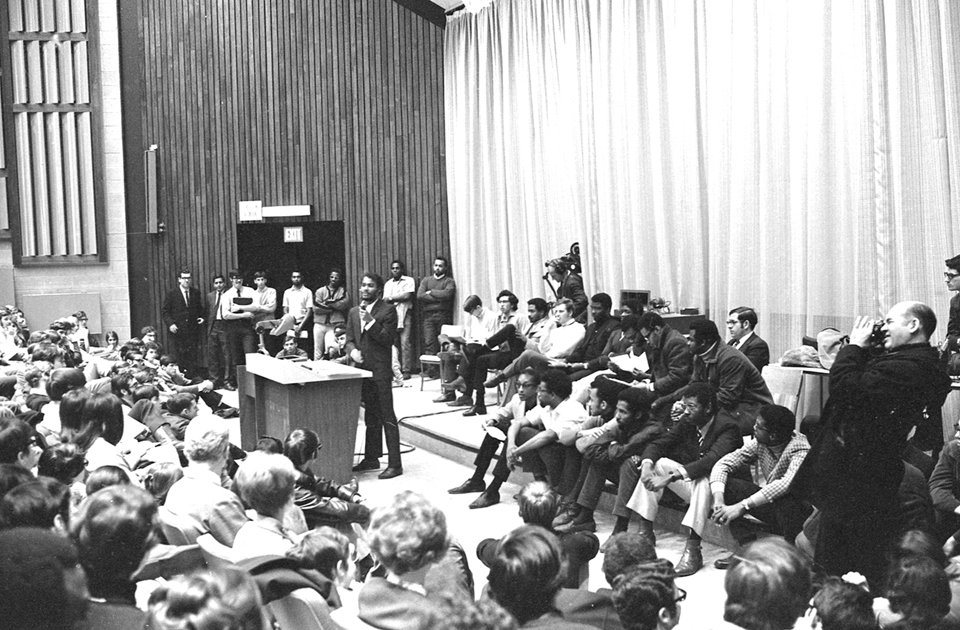 As the cliché goes: fifty years ago on February 11, 1969, something happened on the Ninth Floor of the Hall Building of what used to be Sir George Williams University.
What happened was the largest student occupation in the history of Canada, triggered by a group of Caribbean-born students taking a stand against discrimination in grades at the university.
The occupation of the Computer Lab on the 9th Floor began on January 29 and launched days of negotiations that led to what the students thought was a settlement on February 10 just to have the riot squad of the Montreal Police department storm the room and unleash hours of terror on the occupants.
When the smoke and fire dissipated on the morning of February 11, dozens of students were beaten to a pulp, 97 arrested and several eventually deported back to their Caribbean homes.
Today, although the impact of those events 50 years ago continue to reverberate in our community, the “The Sir George Williams Riot” or “The Computer Room Affair” is remembered as just “an incident,” and for many is merely a footnote in Canadian history.
But that does not sit well with Nalini Mohabir, an assistant professor of Geography at Concordia University.
“This happens to be one of the most important events in Caribbean diaspora history in Montreal, and I think many of my generation have some connection to the event,
yet there’s no evidence of it in the physical landscape of the university or anywhere else in the city. We can feel its absence.”
That’s especially so, she says,  because renovations at the university have completely removed all signs of where the events took place.
“I had the floor plans of the 9th floor and together with two friends we tried to locate where the computer centre was, but sadly it now looks as if the history had disappeared.”
So she is doing something about it.
Protest and Pedagogy is a two-week series of events to commemorate the two weeks occupation that lead to that fateful day February 11, things came to a head.
“The intention is to salvage our history from its sad state and pull it in from the margins because it’s crucial in our understanding of stories of migration.”
For this initiative, Mohabir is joined by a team of academics and artistes with a shared interest in “laying a future foundation for Black/Caribbean studies’ scholars in Quebec.”
They include Ronald Cummings, a literature professor out of Brock University, Kaie Kellough, Oceane Jasor, Christiana Abraham, Steven High (a historian from Little Burgundy), and Angela Kross (from Suriname, a professor of geospatial technologies).
The event series will be launched on January 29th with an exhibit curated by Dominica-born Dr. Christiana Abraham, a Communication Studies professor, featuring photos, newspapers, art work and sounds to help immerse viewers in the history.
The launch (Jan. 29) will also feature CBC’s Nantali Indongo who will be speaking about how the history of the Sir George Williams Revolt shaped her outlook on Montreal. There will also be some of the original protesters in attendance, and live music as well.
There will also be a series of film screenings in conjunction with Cinema Politica, including An (other) Antilles: Remembering a Revolution, and Sugar Cane Alley, and Play the Devil, which we are screening in conjunction with Massimadi.
On Feb 1, there will be a silk-screening workshop with Jamaican-born Charmaine Lurch, whose work focuses on Black subjectivities, and a beaded prayers workshop with Pascale Annoual on Feb 6.
Launch of Protests and Pedagogy on Tuesday, January 29, in the 4th Space at Concordia University – Sir George Williams Campus, 1400 Maisonneuve Blvd. W. Montreal, QC H3G 1M8, 5:00  – 8:00 PM.
Visit https://protestsandpedagogy.ca/ and if you click on calendar you will get the full schedule.