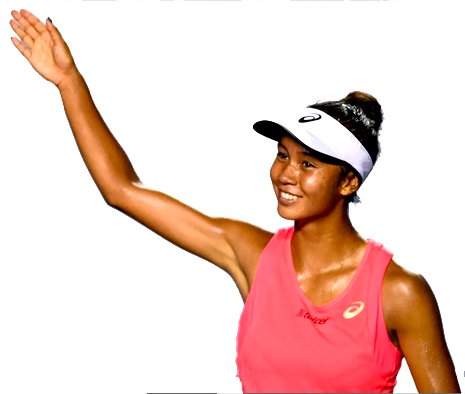 “From a very young age, I knew I was able to beat anyone, anyone who is in front of me. Even playing different sports, I was always that competitive, saying I’m going to win against them, I’m going to win against my dad in soccer, even though that’s like impossible. I’ve always had that belief. I’ve always, like, tried to use that in every match that I go on. I guess today that belief came true.”

Those are the words of Montreal born Leylah Fernandez after she disposed of No.3 ranked Naomi Osaka on September 4, at the Arthur Ashe Stadium, for the 2021 US Open .
The affirmations of the 18-year-old after she defeated the 2020 champion in three sets in the third round held true as she breezed through to the finals, defeating former world No. 1 and three-time major champion Angelique Kerber in the fourth round also in three sets, then fifth seed Elina Svitolina in the quarterfinals, again in three sets, then the second seed, Aryna Sabalenka, in her first semis at a major tournament.
On September 12, a few days after her 19th birthday, she lost to 18-year-old Emma Raducanu, who became the first British female winner at the US Open since Virginia Wade in 1968 and the youngest Brit to win a major tournament.
In the face of that defeat the Montreal tennis star stood tall taking home a respectable $1.25 million for her efforts at one of the most prestigious tennis tournaments in the world.
She entered the US Open ranked number 77 and now positioned at number 28.
Born in Montreal on September 6, 2002, her dad, Jorge is a former professional football player from Ecuador and mom Irene is from the Philippines.
Although fanatic about football (soccer) Fernandez, who is left-handed, chose tennis and coached by her dad made a meteoric rise through the ranks from the world junior circuit, winning the Canadian junior title then making it to the Australian Girls Single finals, before winning the French Open Girls singles finals.
After turning pro in July, 2019, Fernandez won her first singles tennis title at the Gatineau Challenger, as well as her first doubles title at the same tournament. Then she went on to dominate the US Open, in the late summer
A true football fans, Fernandez has been quoted as equating her game to the coaching style of Spanish born Pep Guardiola, manager at Manchester City of the English Premier League.
She has also studied extensively Lionel Messi and Pele.
Above all she attributes her success to the confidence instilled in her by her dad.

“I have also had a very deep belief in myself to achieve my goals. My dad has always made me believe in myself and not to be afraid to fail doing what I love,” she has been quoted as saying.