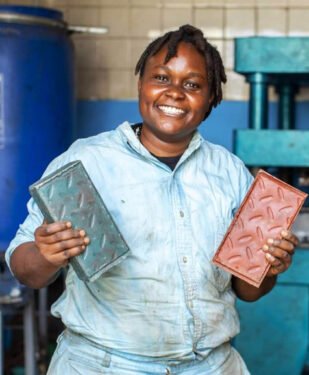 Nzambi Matee, a 29-year-old Kenyan entrepreneur could no longer sit by and watch the degradation caused by plastics. After constantly seeing plastic bags strewn on the roadside she decided to find a way to solve the problem by recycling plastics and transforming them into bricks for construction projects. She received a scholarship to study material science at the University of Colorado at Boulder, where she eventually developed her prototype.
Soon after she launched a company “Gjenge Makers,” a social enterprise that produces sustainable low-cost construction materials made of recycled plastic waste. The bricks produced have been said to be stronger than concrete.
The prototype makes up to 1,500 paving bricks each day – alternative building products that reuse discarded “high density polyethylene, used in milk and shampoo bottles; low density polyethylene, often used for bags for cereals or sandwiches; and polypropylene, used for ropes, flip-top lids and buckets.” An extruder does the mixing of plastic waste with sand at very high temperatures, and then the press compresses it. Plastic is fibrous in nature and so therefore the brick ends up having a stronger compression strength.
So far, the enterprise has managed to recycle more than 20 tonnes of plastic waste into paving bricks that come in an array of colors including but not limited to red, blue, brown, and green. not only are they incredibly strong — tested to hold twice the weight threshold of concrete blocks — furthermore the start-up has also generated 112 job opportunities for garbage collectors, women, and youth groups.
Matee’s efforts have not gone unnoticed she was honored with the United Nations Environment Programme’s 2020 Young Champions of the Earth prize, which recognizes outstanding environmental leaders from the public and private sectors. The Young Champions of the Earth prize is the leading initiative to engage youth in tackling the world’s most pressing environmental challenges. The award also provides seed funding and mentorship to promising environmentalists as they tackle the world’s most pressing challenges.
The young entrepreneur is quoted as saying that “plastic has an “enormous” potential to work with it, but it is “misused and misunderstood.”
“It is absurd that we still have this problem of providing decent shelter – a basic human need. Plastic is a material that is misused and misunderstood. The potential is enormous, but its after life can be disastrous.”
The world is currently battling the effects of plastic pollution which has shown to have adverse effects on both the environment and human health. Science shows that most plastic take between 20 -1500 years to degrade with most of these breaking down to tiny particles called microplastics, which are ingested by birds, fish, and other aquatic creatures.
This in turn affects their fertility and survival. The microplastics also breakdown further into smaller bits known as microfibres which are found in water and air which pose serious threat to human health.
Nzambi Matee’s company’s bricks are fully certified by the Kenyan Bureau of Standards. They have a melting point of over 350⁰C and have already been used in various building projects around the country.